Through the small tall bathroom window
the December yard is gray and scratchy,
the tree calligraphic.
………………………… – Dave Eggers

The view from Dave Eggers’ bathroom window is a close match to the view from my kitchen window. Most trees here in Southern California don’t shed their leaves, but my neighbor’s fig tree does, and our long-dead grass, unwatered in the drought, is a graying yellow stubble interrupted by dying weeds.

No matter where you live in the Northern Hemisphere, December is a month with at least some days where most of the color has been bled out of the view from your window. No wonder this last month of the year should be a universal time of holidays with uplifting music, merry-making things to eat or drink, and bright colors.

Late lies the wintry sun a-bed,
A frosty, fiery sleepy-head;
Blinks but an hour or two; and then,
A blood-red orange, sets again.

Before the stars have left the skies,
At morning in the dark I rise;
And shivering in my nakedness,
By the cold candle, bathe and dress.

Close by the jolly fire I sit
To warm my frozen bones a bit;

Or with a reindeer-sled, explore
The colder countries round the door.

When to go out, my nurse doth wrap
Me in my comforter and cap;
The cold wind burns my face, and blows
Its frosty pepper up my nose.

Black are my steps on silver sod;
Thick blows my frosty breath abroad;
And tree and house, and hill and lake,
Are frosted like a wedding cake.

Our substitute is strange because
he looks a lot like Santa Claus.
In fact, the moment he walked in
we thought that he was Santa’s twin.

We wouldn’t think it quite so weird,
if it were just his snowy beard.
But also he has big black boots
and wears these fuzzy bright red suits.

He’s got a rather rounded gut
that’s like a bowl of you-know-what.
And when he laughs, it’s deep and low
and sounds a lot like “Ho! Ho! Ho!”

He asks us all if we’ve been good

and sleeping when we know we should.
He talks of reindeers, sleighs, and elves
and tells us to behave ourselves.

And when it’s time for us to go
he dashes out into the snow.
But yesterday we figured out
just what our sub is all about.

We know just why he leaves so quick,
and why he’s dressed like Old Saint Nick
in hat and coat and boots and all:
He’s working evenings at the mall. 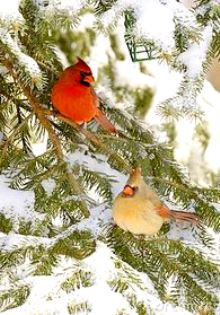 Filigree threads of chickadee.
And wing patterns where one flew

Low, then up and away, gone
To the woods but calling out

The postal van is stalled
In the road again, the mail

Will be late and any good news
Will reach us by hand.

When it’s Christmas we’re all of us magi.
At the grocers’ all slipping and pushing.
Where a tin of halvah, coffee-flavored,
is the cause of a human assault-wave
by a crowd heavy-laden with parcels:
each one his own king, his own camel.

Nylon bags, carrier bags, paper cones,
caps and neckties all twisted up sideways.
Reek of vodka and resin and cod,
orange mandarins, cinnamon, apples.
Floods of faces, no sign of a pathway
toward Bethlehem, shut off by blizzard.

And the bearers of moderate gifts
leap on buses and jam all the doorways,
disappear into courtyards that gape,
though they know that there’s nothing inside there:
not a beast, not a crib, nor yet her,
round whose head gleams a nimbus of gold.

Emptiness. But the mere thought of that
brings forth lights as if out of nowhere.
Herod reigns but the stronger he is,
the more sure, the more certain the wonder.
In the constancy of this relation
is the basic mechanics of Christmas.

That’s what they celebrate everywhere,
for its coming push tables together.
No demand for a star for a while,
but a sort of good will touched with grace
can be seen in all men from afar,
and the shepherds have kindled their fires.

Snow is falling: not smoking but sounding 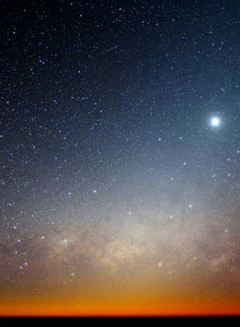 chimney pots on the roof, every face like a stain.
Herod drinks. Every wife hides her child.
He who comes is a mystery: features
are not known beforehand, men’s hearts may
not be quick to distinguish the stranger.

But when drafts through the doorway disperse
the thick mist of the hours of darkness
and a shape in a shawl stands revealed,
both a newborn and Spirit that’s Holy
in your self you discover; you stare
skyward, and it’s right there:
………………………………………a star.

There’s a certain Slant of light

There’s a certain Slant of light,
Winter Afternoons –
That oppresses, like the Heft 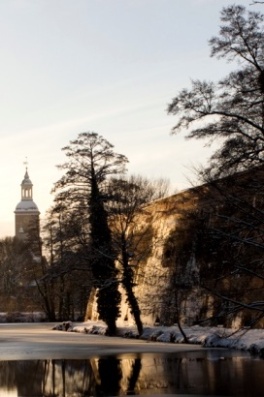 Heavenly Hurt, it gives us –
We can find no scar,
But internal difference –
Where the Meanings, are –

When it comes, the Landscape listens –
Shadows – hold their breath –
When it goes, ’tis like the Distance
On the look of Death –

Winter is good – his Hoar Delights

Winter is good – his Hoar Delights
Italic flavor yield –
To Intellects inebriate
With Summer, or the World –

Generic as a Quarry
And hearty – as a Rose –
Invited with asperity
But welcome when he goes.

“Hope” is the thing with feathers –

“Hope” is the thing with feathers –
That perches in the soul –

I’ve heard it in the chillest land –
And on the strangest Sea –
Yet – never – in Extremity,
It asked a crumb – of me.

May the Light in your windows push back the Dark. 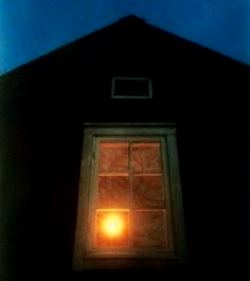 Kenn Nesbitt (1962 – ) Author of children’s poetry and song-lyrics; The Armpit of Doom: Funny Poems for Kids (2013); When the Teacher Isn’t Looking: And Other Funny School Poems (2005); in 2013, he was named Children’s Poet Laureate by the Poetry Foundation

Nancy McCleery – Author of Girl Talk, Night Muse and Staying the Winter. She grew up in Nebraska, and has lived in Alaska

Joseph Brodsky (1940 – ) Born in Leningrad, he was exiled from the Soviet Union as a dissident in 1972 after serving 18 months of a five-year sentence in a labor camp in northern Russia. Less Than One (1988), an essay collection, won the National Book Critic’s Award for Criticism. Also authored collections of poetry, including To Urania (1988) and essays about Venice, Watermark (1992).  In 1987, he was awarded the Nobel Prize for Literature.

Emily Dickinson (1830 – 1886) American’s best-known woman poet and one of the nation’s greatest and most original authors, she lived the life of a recluse in Amherst MA

Nona Blyth Cloud has lived and worked in the Los Angeles area for the past 50 years, spending much of that time commuting on the 405 Freeway. After Hollywood failed to appreciate her genius for acting and directing, she began a second career managing non-profits, from which she has retired. Nona has now resumed writing whatever comes into her head, instead of reports and pleas for funding. She lives in a small house overrun by books with her wonderful husband.
View all posts by wordcloud9 →
This entry was posted in Emily Dickinson, Holidays, Poetry, Word Cloud and tagged Joseph Brodksy, Kenn Nesbitt, Nancy McCleery, Robert Louis Stevenson, Windows, Winter Solstice. Bookmark the permalink.
Loading Comments...
Comment
×
%d bloggers like this: