International Day of Commemoration and Dignity of the Victims *

730 – Second Arab-Khazar War, Battle of Marj Ardabil: in northwestern Iran, a Khazar army led by Barjik defeats the Umayyad forces under General al-Jarrah ibn Abdallah, who is killed during the battle

1447 – The Chenghua Emperor of the Ming dynasty born as Zhu Jianshen, who ascended the throne at age 17, and reigned from 1464 to 1487; it was an autocratic reign which violently suppressed peasant uprisings, curtailed freedom, and saw the institution of the Western Depot, which monitored all civilian actions and words, and meted out punishment to those suspected of treason 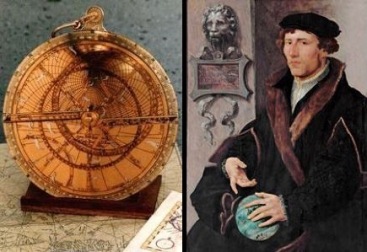 1531 – The Virgin of Guadalupe first appears at the hill of Tepeyac, Mexico City, to Juan Diego, the first indigenous Catholic saint from the Americas

1745 – Maddalena Laura Sirmen born in Venice, Italian violinist and composer; noted as one of the finest and most famous violinists and composers ever taught in a Venetian orphanage; married the renowned violinist Ludovico Sirmen, and they toured together, and sometimes composed music together, but she was also a notable composer in her own right

1748 – Claude-Louis Berthollet born, French chemist; first to demonstrate the bleaching action of chlorine gas, and to develop a solution of sodium hypochlorite as a modern bleaching agent

1783 – In London, the first executions at Newgate Prison take place 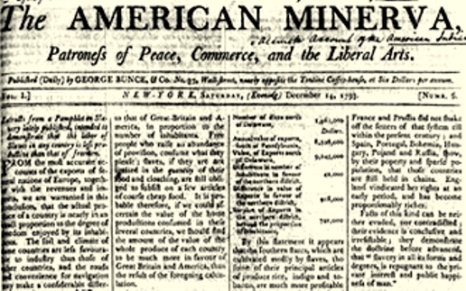 1803 – The 12th Amendment to the U.S. Constitution is passed by the U.S. Congress, and sent to the states for ratification. It directs Electors to vote for a President and for a Vice-President rather than for two choices for President

1851 – The first YMCA in North America is established in Montreal, Canada

1854 – Alfred Lord Tennyson’s poem, “The Charge of the Light Brigade,” is published in England

1870 –Dr. Ida S. Scudder born, third-generation American missionary in India; dedicates her life to fighting bubonic plague, cholera and leprosy, treating India’s women who were not allowed to receive medical treatment from male doctors, and training Indian women as doctors and nurses; founder at the turn of the century of the Christian Medical College and Hospital in Vellore, India, still one of the foremost teaching hospitals in India

1872 – In Louisiana, P. B. S. Pinchback becomes the first African-American governor of a U.S. state

1890 – Laura Salverson (nee Guðmundsdóttir) born, Canadian author and poet whose work reflects her Icelandic heritage; her parents emigrated to Manitoba from Iceland in 1887; her first novel, The Viking Heart, was published in 1923; her novel, The Dark Weaver: Against the Sombre Background of the Old Generations Flame the Scarlet Banners of the New, and her autobiography, Confessions of an Immigrant’s Daughter won the Governor General’s Awards in 1937 and 1939. Immortal Rock: The Saga of the Kensington Stone  won the 1954 Ryerson Fiction Award

1895 – Dolores Ibárruri born, known as “La Pasionaria” (the Passionflower), Spanish Republican hero of the Spanish Civil War and communist politician of Basque origin, known for her rallying cry “¡No Pasarán!” (They shall not pass) during the Battle for Madrid in November 1936. She joined the Spanish Communist Party (PCE) when it was founded in 1921, and in the 1930s, became a writer for the PCE periodical Mundo Obrero (Workers World.) In 1936, she was elected to the Cortes Generales (the Spanish legislature) as a PCE deputy for Asturias. She was exiled from Spain at the end of the Civil War in 1939; by 1942 she was appointed as General Secretary of the Central Committee of the Communist Party of Spain (1942-1960.) From 1960 to 1977, she traveled extensively, and spent much time in Moscow. But in 1960, she ceded her post as secretary-general and was appointed as honorary president of the PCE. She wrote her first memoir, El Unico Camino (The Only Way), and after the Spanish government lifted the ban on the PCE, she applied for a visa to return to Spain, which was eventually granted in 1977. She ran for and was elected to the Cortes Generales (1977-1979), where she voted with a loud “Yes” for the new Spanish Constitution, but failing health prevented her from running again. She died at the age of 93 in 1987. Thousands of people came to pay homage as her body lay on a catafalque, before a cortege carried her body to the Plaza de Columbus for her eulogy, where a multitude of mourners chanted “¡No Pasarán!” and then to burial in the Almudena Cemetery 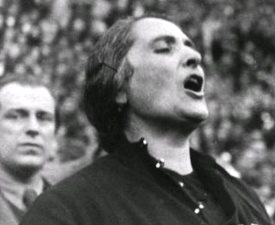 1900 – Margaret Brundage born, American illustrator and painter, remembered for her illustrations in the pulp magazine, Weird Tales. She created most of the covers for the magazine between 1933 and 1938 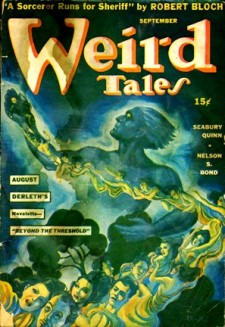 1905 – Dalton Trumbo born, American novelist and screenwriter; one of the Hollywood Ten, blacklisted by the motion picture industry after he refused to testify before the  House Un-American Activities Committee (HUAC) in 1947; he worked clandestinely under other author’s names, winning two Academy Awards for the screenplays for Roman Holiday and The Brave One under fake names

1906 – Esther E. Peterson born, American women’s rights and consumer advocate, teacher, and organizer and lobbyist for labor; in the 1930s, she taught at the innovative Bryn Mawr Summer School for Women Workers in Industry, which brought milliners, telephone operators and garment workers onto the campus; in 1938, Peterson was a paid organizer for the American Federation of Teachers in the New England region. In 1944, Peterson became the first lobbyist for the National Labor Relations Board in Washington, D.C. In 1948, the State Department offered Peterson’s husband a position as a diplomat in Sweden. The family returned to Washington in 1957, and Peterson joined the Industrial Union Department of the AFL-CIO, becoming its first woman lobbyist.  She was Assistant Secretary of Labor and Director of the U.S. Women’s Bureau under President John F. Kennedy. In 1964, President Lyndon Johnson named her to the newly created post of Special Assistant for Consumer Affairs. She later served as President Jimmy Carter’s Director of the Office of Consumer Affairs

1907 – Christmas Seals go on sale for the first time, in a Delaware post office; the proceeds go to fight tuberculosis

1915 – Eloise Jarvis McGraw born, American author of books for children and young adults; won the Newbery award for her novels Moccasin Trail (1952), The Golden Goblet (1962), and The Moorchild (1997)

1933 – Ashleigh Brilliant born, Anglo-American author and cartoonist; I May Not Be Totally Perfect, but Parts of Me Are Excellent, and Other Brilliant Thoughts

1934 – Dame Judi Dench born, highly regarded English theatre and film actress; in companies of the National Theatre and the Royal Shakespeare; a seven-time Oscar nominee and one-time winner, and six-time British Academy Film Award winner. She is an outspoken critic of prejudice in the movie industry against older actresses. She stated in 2014, “I’m tired of being told I’m too old to try something. I should be able to decide for myself if I can’t do things and not have someone tell me I’ll forget my lines or I’ll trip and fall on the set.” She is an active supporter of the UK disabled people’s charity Revitalise, and Survival International, campaigning in the defence of tribal people – the San of  Botswana and the Arhuaco of Colombia

1937 – Japanese troops under the command of Lt. Gen. Asaka Yasuhiko launch an assault on the Chinese city of Nanjing

1944 – Ki Longfellow born, American novelist, playwright, theatrical producer and director, with dual citizenship in Britain; best known in the U.S. for her novel The Secret Magdalene, the first of her works to explore the divine feminine. Some of her other books are mysteries, including her Sam Russo noir series set in the late 1940s

1948 – The UN General Assembly adopts the Convention on the Prevention and Punishment of the Crime of Genocide, currently ratified by 143 countries – naming December 9 the International Day of Commemoration and Dignity of the Victims *

1960 – Caroline Lucas born, British politician, co-leader of the Green Party of England and Wales, and her party’s first elected MP, for Brighton Pavilion since 2010

1962 – The Petrified Forest National Park is established in Arizona

1962 – Roxanne Swentzell born, Santa Clara Pueblo sculptor and ceramicist who studied at the Institute for American Indian Arts in Santa Fe, New Mexico, and the Portland Museum Art School in Oregon. Her first public exhibit was at the annual Santa Fe Indian Market in 1984; in 1986, she won eight awards for her sculpture at the Market. In 1994, she won the Market’s Creative Excellence in Sculpture award. Some of her work is displayed at the Smithsonian’s National Museum of the American Indian

Roxanne Swentzell and ‘The Making of Oneself’

1965 – A Charlie Brown Christmas, first in a series of Peanuts television specials, debuts on CBS

1968 – Douglas Engelbart gave what became known as “The Mother of All Demos” publicly debuting the computer mouse, hypertext, and the bit-mapped graphical user interface using the oN-Line System (NLS)

1972 – Saima Wazed Hossain born, Bangladesh Autism activist; member of the World Health Organization (WHO) Expert Advisory Panel on mental health. Organized the first South Asia conference on Autism in 2011 in Dhaka, Bangladesh, and successfully campaigned for the “Comprehensive and Coordinated Efforts for the Management of Autism Spectrum Disorders” resolution adopted by the World Health Assembly. In 2016, she was elected as chair of the International Jury Board of UNESCO for Digital Empowerment of Persons with Disabilities, and 2017 became the WHO Goodwill Ambassador for autism in the South-East Asia region, and was honored with the International Champion Award for her outstanding contributions 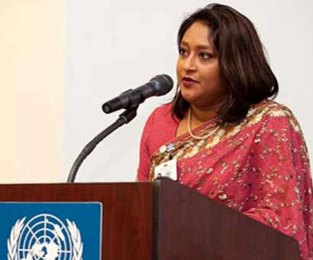 1979 – The eradication of the smallpox virus is certified, making smallpox the first human disease driven to extinction

1993 – The U.S. Air Force destroys the first of 500 Minuteman II missile silos that were marked for elimination under an arms control treaty

2000 – The U.S. Supreme Court, with a 5-4 vote split on strictly party lines, stops the presidential election vote-counting in Florida, handing the election to George W. Bush

Nona Blyth Cloud has lived and worked in the Los Angeles area for the past 50 years, spending much of that time commuting on the 405 Freeway. After Hollywood failed to appreciate her genius for acting and directing, she began a second career managing non-profits, from which she has retired. Nona has now resumed writing whatever comes into her head, instead of reports and pleas for funding. She lives in a small house overrun by books with her wonderful husband.
View all posts by wordcloud9 →
This entry was posted in History, Holidays, On This Day and tagged Dolores Ibárruri, Joel Chandler Harris, John Milton, Lech Walesa, Maddalena Laura Sirmen, Roxanne Swentzell, Saima Wazed Hossain. Bookmark the permalink.
Loading Comments...
Comment
×
%d bloggers like this: