332 – Constantine the Great announced free distributions of food to citizens in Constantinople, probably because of runaway inflation and food shortages

1096 – First Crusade, in the Rhineland –in Worms (Germany) a massacre begins which lasts eight days, and between 800 and 1,000 Jews are savagely murdered by crusaders led by Count Emicho of Flonheim, joined by local Christians because of a false rumor that Jews had boiled a Christian alive and used his corpse to poison the town’s wells. On May 18, even Jews who had been given sanctuary in Bishop Adalbert’s palace were slaughtered after Emicho’s army, assisted by local burghers, broke in. Some Jews committed suicide or killed their own children to escape death at the hands of the Christians. A few Jews who were forceably baptized were not killed. There were also persecutions in Magdeburg, and massacres of Jews in Speyer and Mainz (an estimated 1100 Jews were killed there). These slaughters were carried out in spite of condemnation of persecuting or murdering Jews by both the Roman Catholic Church and Holy Roman Emperor Henry IV

1152 – The wedding of Henry II of England and Eleanor of Aquitaine; they will have five sons and three daughters 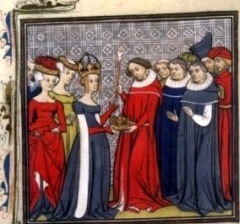 1291 – With the fall of the Crusader-controlled city of Acre to the Mamluks, the Crusaders lose control of their Kingdom of Jerusalem; no effective campaign is raised to recapture the Holy Lands

1593 – Playwright Thomas Kyd’s accusations of heresy lead to an arrest warrant for Christopher Marlowe; he is brought to court to await questioning by the Privy Council, but they weren’t meeting, so he has to keep coming to “give his daily attendance” but Marlowe is stabbed to death elsewhere under suspicious circumstances on the 10th day, May 30

1642 – The Canadian city of Montreal is founded

1852 – Gertrude Käsebier born, American photographer, known for portraits of mothers and Native Americans, promoted photography as an occupation for women

1867 – Elisabeth Luther Cary born, American biographer and art critic; in 1908, she was named the first full-time art critic for the New York Times, where she worked for the next twenty five years. Following WWI, she encouraged the founding of industrial arts schools and the introduction of machinery into the studio

1883 – Walter Gropius born, German architect; one of  the founders of the Bauhaus school; a pioneering master of modernist architecture, and a leading architect of the International Style

1886 – Jeanie MacPherson born, American woman who wrote, directed and starred in her own silent film, The Tarantula, then focused on screenwriting, and wrote scripts for 30 of Cecil B. DeMille’s silent films; one of the founding members of the Academy of Motion Picture Arts and Sciences 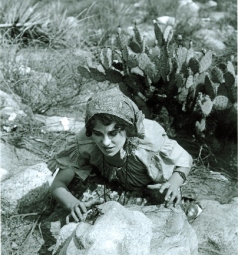 Jeanie MacPherson in The Tarantula

1896 – The U.S. Supreme Court rules in Plessy v. Ferguson that the “separate but equal” doctrine is constitutional

1902 – Meredith Wilson born, American composer and playwright; wrote the book, lyrics and music for the Broadway musical, The Music Man

1907 – Irene Hunt born, American author of historical novels written for children; Newbery Medal winner for Up a Road Slowly. Also noted for Across Five Aprils, honored in 1965 as a Newbery Honor book, and with Lewis Carroll Shelf Award. It is considered one of the first Young Adult novels

1910 – Ester Boserup born, Danish economist who worked for international organizations, including the United Nations; author of seminal books on agrarian change and the importance of women’s work; Women’s Role in Economic Development was one of the inspirations for the UN Decade for Women (1975-1985)

1917 – The Selective Service Act of 1917 is passed, giving the U.S. President the power of conscription

1941 – Miriam Margoyles born in England, now an Australian citizen; veteran character actress known for her performances as Mrs. Mingott in The Age of Innocence and Professor Sprout in the Harry Potter films.  As a new citizen of Australia, she “came out” as a lesbian live on national television in front of Prime Minister Julia Gillard, on Australia Day in 2013. Her life partner since 1967 is Heather Sutherland, a retired Australian professor of Indonesian Studies. Margoyles is a member of Jews for Justice for Palestinians and the British-based ENOUGH! Coalition, seeking “a just settlement between Israelis and Palestinians” 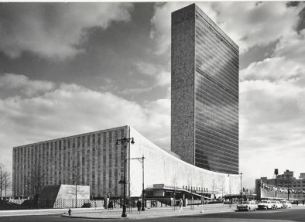 1952 – Jeana Yeager born, American aviator, co-pilot with Dick Rutan on the first non-stop, non-fueled flight around the world in the Rutan Voyager

1955 – Operation Passage to Freedom, the evacuation of 310,000 Vietnamese civilians, soldiers and non-Vietnamese members of the French Army from communist North Vietnam to South Vietnam following the end of the First Indochina War, is completed 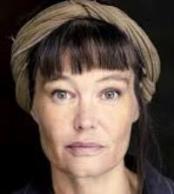 1967 – Mimi MacPherson born, Australian environmentalist and entrepreneur; at age 21, she began crewing aboard a whale-watching boat, and the following year, she launched her own whale-watching business, which won a 1996 Queensland Tourism Award. She was named 1997’s Businesswoman of the Year by the Women’s Network of  Australia. She served as spokesperson for several environmental organizations, including Planet Ark, Clean Up Australia and Sydney Water. MacPherson raised over $100,000 for the Pacific Whale Foundation. Currently, she is working with the World Wildlife Fund and the Born Wild program 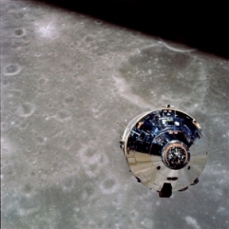 1977 – The first International Museum Day * is organized by the International Council of Museums to emphasize the importance of museums to the development of society; 3,000 museums in over 120 countries now have events and activities on this day

1980 – Race riot in Miami FL result in 15 deaths, the most violent racial disturbance since the riots in Watts and Detroit in the 1960s

1991 – Chemist Helen Sharman becomes the first Briton in space when the Soyuz TM-12 mission is launched; she performed medical and agricultural tests as well as photographing the British Isles 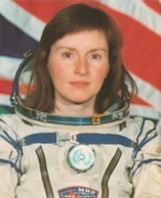 1998 – The federal government files an antitrust case against Microsoft Corporation

2014 – The results of a study conducted at Southampton General Hospital in Britiain show that a new drug, nintedanib, significantly slows the progression of idiopathic pulmonary fibrosis, a fatal lung disease that affects former smokers

2016 – A young Nigerian woman escaped after being held by Boko Haram for two years, according to Nigerian authorities. Amina Ali Darsha Nkeki was the first of the more than 200 Chibok schoolgirls kidnapped by the Islamist extremist group in April 2014 to return. She reportedly emerged from a wooded area with a 4-month-old baby and a suspected Boko Haram member who identified himself as her husband. She told authorities her schoolmates were still in the Sambisa forest, a Boko Haram stronghold

2019 – After Alabama’s state legislature passed a near-total ban on abortion with no exceptions for rape or incest, Donald Trump tweeted that he is “strongly pro-life,” but supports three exceptions for abortions: rape, incest and when necessary to protect the life of the mother. The governors of Missouri and Georgia signed their own restrictive abortion bills last week as part of an orchestrated attempt to overturn Roe V. Wade.

Nona Blyth Cloud has lived and worked in the Los Angeles area for the past 50 years, spending much of that time commuting on the 405 Freeway. After Hollywood failed to appreciate her genius for acting and directing, she began a second career managing non-profits, from which she has retired. Nona has now resumed writing whatever comes into her head, instead of reports and pleas for funding. She lives in a small house overrun by books with her wonderful husband.
View all posts by wordcloud9 →
This entry was posted in History, Holidays, On This Day and tagged Amina Ali Darsha Nkeki, Frank Capra, Gertrude Käsebier, Irene Hunt, Omar Khayyam, Tina Fey, Walter Sisulu. Bookmark the permalink.
Loading Comments...
Comment
×
<span>%d</span> bloggers like this: