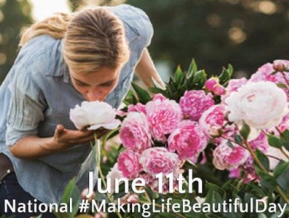 Corn on the Cob Day

1184 BC – According to calculations by Eratosthenes, chief librarian of the Library at Alexandria, this day Troy is sacked and burned by the Achaeans (Greeks) at the end of the Trojan War

173 – In a violent thunderstorm, the “Miracle of the Rain” turns an ambush by the German Quadi tribe (in what is now Moravia) into a victory for Marcus Aurelius, when the storm replenishes the Romans’ depleted water supply

631 – Emperor of China Taizong of Tang sends envoys to the Xueyantuo bearing
gold and silk, seeking the release of enslaved Chinese prisoners captured during the rocky transition on the northern frontier from Sui to Tang; the embassy succeeds in freeing 80,000 Chinese men and women who are returned to China

1741 – Joseph Warren, American physician, prominent leader of Boston’s patriot organizations during the early days of American Revolution, killed at the Battle of Bunker Hill in 1775

1742 – Benjamin Franklin invents the Franklin stove, but purposely does not patent it, so that others can freely copy the design 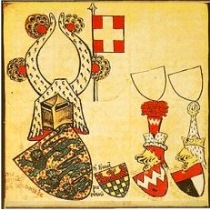 1815 – Julia Margaret Cameron born in Calcutta, British photographer who experimented with soft focus and manipulating the picture during processing 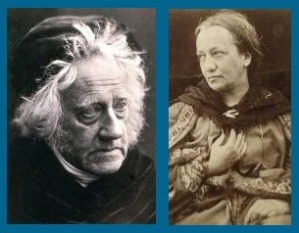 1837 – The Broad Street Riot, a brawl involving at least 800 in the fighting while 10,000 spectators egg them on, in Boston MA; inebriated firemen leaving a pub which is in violation of the Sunday ‘blue laws’ by serving them, meet a large group of Irishmen on the way to a funeral; the violence is finally quelled when Mayor Samuel Eliot calls in the state militia

1847 – Afonso, Prince Imperial and heir apparent to the throne of the Empire of Brazil, died from epilepsy at age two, leaving Emperor Dom Pedro II without a male heir

1860 – Mary Jane Rathbun born, American marine zoologist, widely recognized as the crustacean authority of her time; she established the basic taxonomic information on Crustacea; Rathbun worked at the Smithsonian for almost 60 years, most of that time serving as the entire Department of Marine Invertebrates, finally resigning her position as superintendent to use her salary to hire an assistant, and continuing her work as a volunteer. She escribed over 1000 new species/subspecies, and published over 160 scientific papers

1877 – Renée Vivien born as Pauline Mary Tarn, an American-British poet who wrote in French and lived in Paris during the Belle Époque. Vivien was a high-profile lesbian, dubbed “Muse of the Violets” because of her love of the flower. She was as notable for her series of relationships as for her Sapphic verse; the famed French writer Colette was her neighbor from 1906 to 1908, and wrote a controversial portrait of Vivien in The Pure and the Impure. Renée Vivien died at the age of 32 in 1909, the result of drug and alcohol abuse, and anorexia nervosa – she only weighed about 70 pounds at the time of her death

1880 – Jeannette Rankin born, American social worker, politician, peace and women’s rights activist, first woman elected to U.S. House of Representatives, voted in Congress against declaration of war for both WWI and WWII, casting the only vote against WWII

1886 – Moses Kottler born, son of Jewish emigrants, South African sculptor and painter; studied art in Jerusalem, Munich, Paris and London; member of the New Group, which aimed to raise the quality and awareness of South African art, help artists in financial difficulty, and hold more exhibitions all over South Africa

1892 – The Limelight Department, one of the world’s first film studios, is officially established in Melbourne, Australia

1899 – Yasunari Kawabata born, Japanese novelist; in 1968, he became the first Japanese to be awarded Nobel Prize for Literature; Meijin (The Master of Go) and Yama no Oto (The Sound of the Mountain) 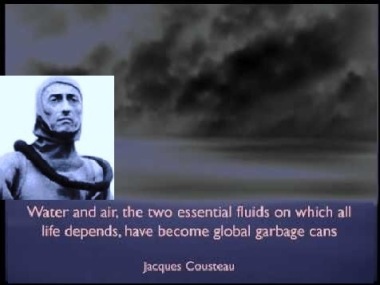 1909 – Natascha Artin Brunswick born in Russia, mathematician, translator; her family left after Russia after the October Revolution in 1917, eventually arriving in Germany; she studied mathematics at the University of Hamburg, graduating in 1930; also a photographic enthusiast who took many pictures of pre-WWII Germany. Because her mother was a Jew who had converted to Christianity in order to marry her father, Natascha became classified as half-Jewish under Nazi law. After she married her former mathematics professor, Emil Artin, he was forced into early retirement from his professorship in 1934. In 1937, the Artins and their two children left Germany for the U.S; he was able to get a teaching position at the University of Notre Dame, but she was classified as an enemy alien, and her camera was confiscated by police in 1942 (by the time it was returned to her, she had lost interest in photography, but her son discovered her photographs decades later, and arranged for their exhibition). Nevertheless, the U.S. Army hired her to teach Russian to soldiers in an Army Specialized Training Program. Emil Artin was hired by Princeton University in 1946; two years later, the couple divorced and he moved back to Germany. In 1959, she married composer Mark Brunswick. She was technical editor and translator for the journal Communications on Pure and Applied Mathematics, founded at New York University’s Courant Institute of Mathematical Sciences, where she worked until 1989

1919 – Sir Barton, a chestnut Thoroughbred, becomes the first horse to win the Triple Crown, setting an American record for a mile and three-eighths in the Belmont Stakes

1920 – During the Republican National Convention in Chicago, party leaders gathered in a Blackstone Hotel room to come decide on their candidate for the U.S. presidential election; the Associated Press coins the phrase “smoke-filled room” in its story

1920 – Hazel Scott born in Trinidad, Jazz/Classical pianist, singer, and civil rights activist; was recognized early as a musical prodigy, her mother  took her to New York City at the age of four. Scott was given scholarships from the age of eight to study at the Juilliard School, and began performing in a jazz band and on the radio by age 16. She was prominent as a jazz singer throughout the 1930s and 1940s. In 1950, she became the first black person to have a TV show, The Hazel Scott Show, featuring variety entertainment. When on tour she refused to perform in segregated venues. Her television show was cancelled a week after she testified before the House Un-American Activities Committee in September 1950. In 1945, she had married U.S. Congressman Adam Clayton Powell Jr. They divorced in 1960, after Scott had moved to Paris in the late 1950s to revive her career, not returning to the United States until 1967. She died of cancer in 1981, survived by her son, Adam Clayton Powell III

1922 – Jean Sutherland Boggs born, Canadian art historian, specialist in Edgar Degas’ work, academic and civil servant; the first woman director at both the National Gallery of Canada (1966-1976), and the Philadelphia Museum of Art (1978-1982); Professor of Fine Arts at Harvard (1976-1979); chair and CEO of Canada Museums Construction Corporation (1982-1985), where she directed the construction of a National Gallery building and the Canadian Museum of Civilization, which opened in 1986, and is now called the Canadian Museum of History; author of Portraits by Degas, and several other books about the painter’s life and work; became an Officer of the Order of Canada in 1973 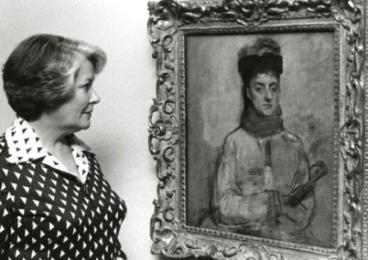 Jean Sutherland Boggs with Degas painting Woman with an Umbrella

1937 – One of the key trials of the Great Purge in the USSR, was The Case of the Military,  a secret trial in which senior military officers, accused of anti-Soviet conspiracy, are executed during the night of June 11-12, immediately after the guilty verdict

1939 – President Franklin Roosevelt introduces King George VI and Queen Elizabeth of England to the American hot dog during their state visit to the U.S.

1942 –U.S. and the Soviet Union sign a WWII lend-lease agreement

1944 – The USS Missouri, the last battleship built by the U.S. Navy, is commissioned

1962 – Frank Morris, John Anglin and Clarence Anglin become the only prisoners acknowledged to have escaped from Alcatraz Island

1963 – Alabama Governor George Wallace defiantly stands at the door of Foster Auditorium at the University of Alabama to block two black students, Vivian Malone and James Hood, from attending the school; later that day, accompanied by federalized National Guard troops, they are able to register. Vivian Malone is junior, so she becomes the school’s first African American graduate 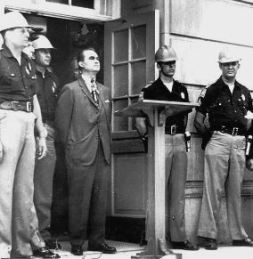 1963 – John F. Kennedy addresses Americans from the Oval Office proposing the Civil Rights Act of 1964, which will give equal access to public facilities, end segregation in education and guarantee federal protection for voting rights

1987 – Diane Abbott, Paul Boateng and Bernie Grant are elected as the first black Members of Parliament in Great Britain

2008 – The Fermi Gamma-ray Space Telescope is launched into orbit 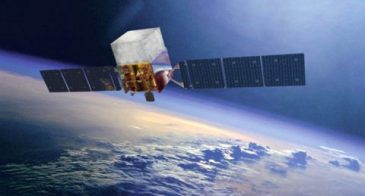 2015 – Making Life Beautiful Day * is launched by Foundation Apriori, the charitable arm of Apriori Beauty, to recognize women and men who are making life beautiful, building relationships and helping others

2018 – The San Juan National Forest in southwestern Colorado shut down for the first time in its 113-year history due to a drought-driven fire that has expanded to 22,131 acres. The 1.8-million-acre forest spans nine counties and is popular with U.S. and international tourists, who flock there in the summer season, which is just getting underway. Authorities in the national forest already had imposed fire restrictions. “Under current conditions, one abandoned campfire or spark could cause a catastrophic wildfire, and we are not willing to take that chance with the natural and cultural resources under our protection and care, or with human life and property,” said Richard Bustamante, SJNF forest fire staff officer. The area will remain closed until there is enough rainfall to reduce the danger

Nona Blyth Cloud has lived and worked in the Los Angeles area for the past 50 years, spending much of that time commuting on the 405 Freeway. After Hollywood failed to appreciate her genius for acting and directing, she began a second career managing non-profits, from which she has retired. Nona has now resumed writing whatever comes into her head, instead of reports and pleas for funding. She lives in a small house overrun by books with her wonderful husband.
View all posts by wordcloud9 →
This entry was posted in History, Holidays, On This Day and tagged Dame Millicent Fawcett, Hazel Scott, Jacques Cousteau, Jeannette Rankin, John Constable, Suleiman Mousa, Yasunari Kawabata. Bookmark the permalink.
Loading Comments...
Comment
×
%d bloggers like this: