1215 – Magna Carta Day * – King John of England puts his royal seal on the Magna Carta; while mostly benefiting the barons who had been in rebellion against King John’s abuse of feudal law and custom, it is a milestone in the history of the Rule of Law because it places limits on the power of the monarchy. It leads to England’s Petition of Right (1628) and the Habeas Corpus Act (1679), insuring the right of trial by a jury of one’s peers, and requiring a person under arrest to be brought before a judge or court to either show lawful grounds for detaining them, or to release the detainee

1219 – Danish King Valdemar II is victorious over the Estonians in the Battle of Lyndanisse; legend says the Dannebrog (Denmark’s national flag) fell down from the sky after the battle was won, so the Day of Valdemar * is also Flag Day 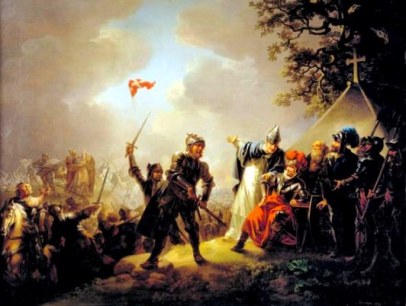 Dannebrog falling from the sky by Christian August Lorentzen – 1809

1300 – In northern Spain, Bilbao is founded by Diego López V of Haro, Lord of Biscay 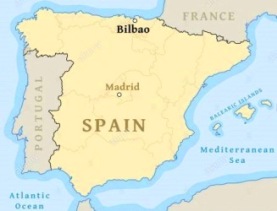 1520 – Pope Leo X threatens to excommunicate Martin Luther in Exsurge Domine, which censures forty-one of Luther’s propositions, and gives him 60 days to recant

1667 – Dr. Jean-Baptiste Denys administers the first documented blood transfusion. He transfuses about 12 ounces of sheep blood into a 15-year-old boy, who had been bled with leeches 20 times. The boy survives the transfusion, but later patients receiving multiple transfusions of animal blood do not

1752 (traditional date) – Benjamin Franklin proves that lightning is electricity using a 40-foot-tall iron rod in a lightning storm, and extracting electrical sparks from a cloud

1763 – Kobayashi Issa born Kobayashi Nobuyuki, Japanese poet who used ‘Issa’ as his pen name (meaning cup of tea); one of the ‘Great Four’ haiku masters, with Bashō,  Buson and Shiki. He wrote over 20,000 haiku, and is also known for his drawings, which frequently illustrated his poetry. He was a lay Buddhist priest

1860 – Florence Nightingale opens the first school for nurses at the St. Thomas hospital in London

1878 – Margaret Abbott born, American golfer and Olympic winner, first American woman to win an event in the Olympics, in possibly the weirdest Olympics story ever. The 1900 Paris Games were held at the same time as the Paris Exhibition, and were a poorly organized and little-publicized sideshow to the Exhibition. Many of the participants, including Abbott, did not even know they were competing in Olympic events. It was the first Olympics where women were allowed to participate, and only 22 women competed, compared to 975 men. The games stretched out over six months, and no one got a medal – it was the only Olympics where various objects, like porcelain bowls, were given as prizes instead of medals. Margaret Abbott and her mother Mary were living in Paris between 1899 and 1902, and Margaret had won several local amateur golfing events back home in Illinois, but wasn’t one of the official U.S. Olympians – she was just there in Paris and knew how to play. All the women golfers wore long skirts and fashionable hats – some even showed up wearing high heels and tight skirts. It was just a nine-hole event, and Margaret won with a score of 47; her mother also played, and came in seventh with a score of 65. This was the only time in Olympic history that a mother and daughter competed in the same sport in the same event at the same Olympics. It wasn’t until after Margaret Abbott’s death, when historical researchers found evidence the women’s golf event was actually part of the 1900 Olympics, that her win became an official Olympic record, so she never knew she was an Olympian. Women’s golf did not return to the Olympics until the 2016 Summer Games in Rio de Janiero

1887 – Malvina Hoffman born, American artist and author; her monumental bronze sculpture series, “The Races of Mankind,” is commissioned in 1930 by Chicago’s Field Museum of Natural History 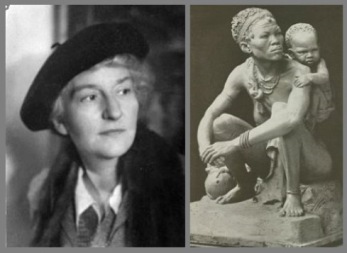 1902 – Erik Erikson born in Germany, American psychoanalyst who reshaped views of human development; theory of psychosocial development of the individual

1910 – David Rose born, American songwriter-composer; “The Stripper”, “Holiday for Strings” and TV series theme songs, including  Little House on the Prairie  and Bonanza

1914 – Saul Steinberg born in Romania, America artist, illustrator and cartoonist, famed for decades of covers and drawings for The New Yorker

1915 – Nini Theilade born, Danish ballet dancer and choreographer, leading dancer with the Ballet Russe de Monte Carlo (1938-1940) and choreographed several works for the Royal Danish Ballet. She went to Brazil during WWII, where she taught ballet, and then returned to Copenhagen in the 1950s, and started a ballet school. She lived to age 102

1920 – Denmark reunites with Southern Jutland; Denmark fought two wars with Germany, in 1848 and 1864, over the disputed territory; celebrated as Reunion Day *

1920 – Amy Clampitt born, American poet and author; she worked as a secretary at the Oxford University Press, a reference librarian at the Audubon Society, and a freelance editor, before taking up writing poetry again in her 40s, which she had first written in college. Her debut full-length poetry collection, The Kingfisher, wasn’t published until 1983, when she was 63 years old. Clampitt published five more books of poetry, including What the Light Was Like (1985), Archaic Figure (1987), Westward (1990), and her last book, A Silence Opens, in 1994, the year she died of cancer 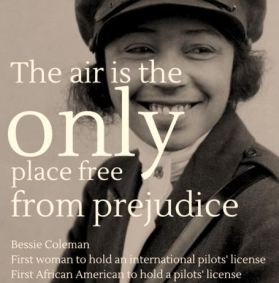 1924 – Hédi Fried born in Romania, Swedish psychologist and author; a Holocaust survivor of both Auschwitz and Bergen-Belson, she arrived in Sweden in July 1945. Fried has received many honors, including the Swedish Illis Quorum medal, the 1998 Natur & Kulturs Kulturpris for her literary work, and the Order of the Star of Romania in 2016

1927 – Ibn-e-Insha born as Sher Muhammad Khan, Pakistanis Urdu poet, humorist, travel writer and newspaper columnist, regarded as one of the best humorists in Urdu, and also admired for his influential ghazal, Insha Ji Utthoo Ab Kooch Karo (Rise oh Insha Ji, and let us set off ). He active in the Progressive Writers Movement

1932 – Mario Cuomo born, American Democratic politician; Governor of New York (1983-1994); NY Lieutenant Governor (1979-1982); NY Secretary of State (1975-1978); noted for his eloquent keynote speech at the 1984 Democratic National Convention. He began as a lawyer representing neighborhood homeowner and resident groups opposing displacement, which led to his appointment by NYC Mayor John Lindsay to conduct an inquiry and mediate a dispute over low-income housing in high-income residential Forest Hills, and Cuomo’s publication of his book Forest Hills Diary about the experience

1938 – Jeanette W. Hyde born, American diplomat; President Bill Clinton appointed her as U.S. Ambassador to Barbados/Dominica/St. Lucia (1994-1998) and as Ambassador to Antigua/Grenada/St. Vincent and St. Christopher-Nevis-Anguilla (1995-1998).  In 1996, the U.S. Coast Guard presented her with the highest civilian award for Public Service for treaty work on drug trafficking, and in 1997 the U.S. Department of Defense, the FBI and the U.S. Drug Enforcement Agency presented her with Civilian Service awards. She is a member of the Council of American Ambassadors

1945 – Miriam Defensor Santiago born, Filipino judge and politician; as a senator of the Philippines, in 1995 she authors a record number of bills and laws; in 2012, she becomes the first Filipina and first Asian from a developing country to be elected as adjudge of the International Criminal Court at the Hague, but is forced to resign when she is diagnosed with lung cancer; in 2016, joins the Advisory Council of the International Development Law Organization (IDLO), an intergovernmental body that promotes the rule of law

1951 – Jane Amsterdam born, American magazine and newspaper editor. She was a section editor for the Washington Post (1979-1983), then became editor of Manhattan, Inc. magazine (1984-1987), which won the 1985 National Magazine Award for General Excellence, In 1988, she became a senior editor at Alfred A. Knopf, then left to be an editor at the New York Post, but was forced out when her shift in emphasis from tabloid sensationalism to investigative journalism failed to sell more newspapers

1963 – Helen Hunt born, American actress, director and screenwriter; best known for the sitcom Mad About You, for which she won four Emmys, and her performance in the film As Good as It Gets, which earned her an Oscar for Best Actress. She made her directorial debut with Then She Found Me (2007) and also starred and co-authored the screenplay. She wrote the screenplay and directed Ride in 2014, as well as directing numerous episodes of several television series

1999 – Nicholas Vitalich is arrested for assaulting his girlfriend with a large tuna, outside a San Diego supermarket, and charged with assault with a deadly weapon

2006 – In Georgia v. Randolph, the U.S. Supreme Court rules 5-3 that under specific circumstances, without a search warrant, police have no constitutional right to search a house if one resident consents to the search while another resident objects. The Court distinguished this case from the “co-occupant consent rule” established in United States v. Matlock, (1974), which allowed one resident to consent in absence of the co-occupant

2007 – Inaugural Wind Day, which becomes Global Wind Day * in 2009, is organized and sponsored by the European Wind Energy Association (EWEA) and the Global Wind Energy Council (GWEC); now spreading the word about renewable wind power in over 30 countries on 4 continents 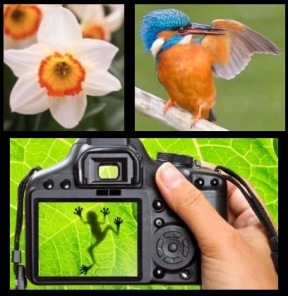 2013 – World Elder Abuse Awareness Day * is founded by Dr. Elizabeth Podnieks of the International Network for the Prevention of Elder Abuse (INPEA) 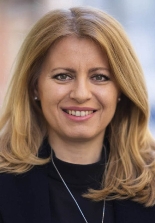 Nona Blyth Cloud has lived and worked in the Los Angeles area for the past 50 years, spending much of that time commuting on the 405 Freeway. After Hollywood failed to appreciate her genius for acting and directing, she began a second career managing non-profits, from which she has retired. Nona has now resumed writing whatever comes into her head, instead of reports and pleas for funding. She lives in a small house overrun by books with her wonderful husband.
View all posts by wordcloud9 →
This entry was posted in History, Holidays, On This Day and tagged Amy Clampitt, Bessie Coleman, Ibn-e-Insha, Juliana Azumah-Mensah, Kobayashi Issa, Mario Cuomo, Zuzana Čaputová. Bookmark the permalink.
Loading Comments...
%d bloggers like this: