TCS: Van Gogh – A Great Fire Burns Within Me

It is a myth that Vincent van Gogh never sold a painting during his lifetime, but he did only sell a few. His most significant sale was The Red Vineyard, purchased in January 1890 by Anna Boch, while he was in a psychiatric hospital, just months before his death. 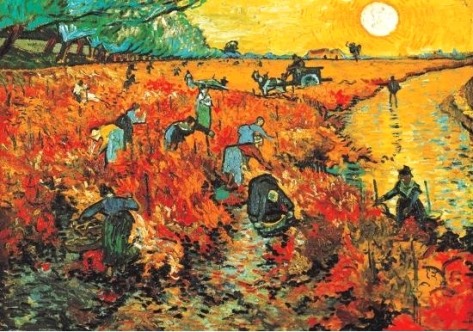 In Van Gogh: The Complete Paintings, Rainer Metzger wrote:  “. . . the fact should not be overemphasized; after all, Vincent was so willing to give his paintings as presents that many would-be purchasers never needed to part with a penny.”

It’s also false that he died without ever receiving recognition for his work. He was known in the art world. The avant-garde circles in France and Belgium recognized his talent before his death. One of the few times his work was exhibited, that January in 1890, he received a gushing review. Several fellow artists spoke favorably of his work, and of course his brother Theo, an art dealer, was a tireless champion, and supported him financially for years so that he could paint.

I put my heart and my soul into my work, and have lost my mind in the process.

His battle with mental illness kept him from making long-lasting friends. He was diagnosed with a form of epilepsy that causes seizures, hallucinations, and manic depression, which often made him difficult to be around. On occasion he wrote to Theo of how lonely he was.

Even when van Gogh was gaining some professional recognition for his art, he often felt unwanted and misunderstood. In June 1880, he wrote: “A great fire burns within me, but no one stops to warm themselves at it, and passers-by only see a wisp of smoke.” It was an idea he expressed in other letters over the next ten years.

He was only 37 when he died on July 29, 1890. His brother died just five months later. The appreciation for his paintings grew exponentially after his death, helped by his widowed sister-in-law, Johanna van Gogh, who edited, translated, and published all 652 letters from Vincent that she had in her possession, and lent van Gogh’s paintings to various exhibitions.

What Happened When He Looked

His miners are made of earth, his sowers so close
to the colors of the fields, only the broad hat, the sack,
the outflung arm keeps them from fading into wheat.

But sometimes, he found, the earth itself turns
to water. Mountains tumble like rapids, waves
curling, blue, roiling and leaping like
the Psalmist’s mountains clapping their hands.

And water turns to air. As life turns to breath.
The sky grows heavy with sun and draws
everything into its fierce embrace, urging
matter upward and homeward to where
the energies of earth begin.

And then there is fire. When they are alive enough
(or we), bushes burn. If you see it, you go
reeling home along a roadway you suddenly know
is temporary and might evaporate or begin
to pinwheel around a star, taking you with it
beyond deeper and deeper blue, into yellow that melts
to a core of thick, transparent white where love
burns day and night to fuel the fallen seed.

“What Happened When He Looked” from The Color of Light: Poems on Van Gogh’s Late Paintings, © 2007 by Marilyn Chandler McIntyre  – Wm. B. Erdman Publishing

Marilyn Chandler McEntyre is a writer and professor of medical humanities at the UC Berkeley-UCSF Joint Medical Program. She is the author of 14 books, including Caring for Words in a Culture of Lies; Dear Doctor: What Doctors Don’t Ask, What Patients Need to Say; and In a Quiet Light: Poems on Vermeer’s Women.

Of course, the most famous poem about Van Gogh is the song ‘Vincent’ written by Don McLean:

For my part I know nothing with any certainty,
but the sight of the stars makes me dream.

Nona Blyth Cloud has lived and worked in the Los Angeles area for the past 50 years, spending much of that time commuting on the 405 Freeway. After Hollywood failed to appreciate her genius for acting and directing, she began a second career managing non-profits, from which she has retired. Nona has now resumed writing whatever comes into her head, instead of reports and pleas for funding. She lives in a small house overrun by books with her wonderful husband.
View all posts by wordcloud9 →
This entry was posted in Art, Poetry, The Coffee Shop and tagged Don McClean, Marilyn Chandler McEntyre, Van Gogh - A Great Fire Burns Within Me, Vincent Van Gogh. Bookmark the permalink.