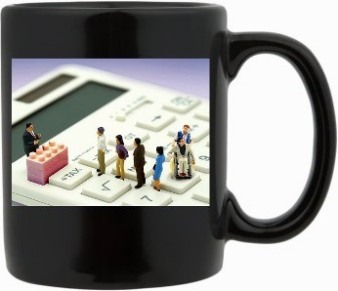 When plunder becomes a way of life for a group of men
in a society, over the course of time they create for
themselves a legal system that authorizes it and a
moral code that glorifies it.

April 15, Tax Day in the USA, is nevertheless part of National Poetry Month, so you’re getting some poetry with your morning coffee, in which taxes are at least mentioned in passing. I hope those of you who’re Americans are not going to be waiting in line to mail your returns to beat the midnight deadline, but if you are, I’m also giving you the classic old Beatles tune as today’s earworm.

Bai Juyi (772-846), renowned Chinese poet, Chan Buddhist, and Tang dynasty government official.  Many of his poems concern his career, including his time serving as governor of three different provinces.

After Collecting the Autumn Taxes

From my high castle I look at the town below
Where the natives of Pa cluster like a swarm of flies.
How can I govern these people and lead them aright?
I cannot even understand what they say.
But at least I am glad, now that the taxes are in,
To learn that in my province there is no discontent.
I fear its prosperity is not due to me
And was only caused by the year’s abundant crops,
The papers that lie on my desk are simple and few;
My house by the moat is leisurely and still.
In the autumn rain the berries fall from the eaves;
At the evening bell the birds return to the wood.
A broken sunlight quavers over the southern porch
Where I lie on my couch abandoned of idleness.

Edna St. Vincent Millay (1892-1950) was born in Maine, graduated from Vassar College in 1917, and became a well-known poet and playwright, with a strong feminist style. She was the third woman to win the Pulitzer Prize for Poetry, in 1923, for The Ballad of the Harp-Weaver.

We Talk of Taxes, and I Call You Friend

We talk of taxes, and I call you friend;
Well, such you are,—but well enough we know
How thick about us root, how rankly grow
Those subtle weeds no man has need to tend,
That flourish through neglect, and soon must send
Perfume too sweet upon us and overthrow
Our steady senses; how such matters go
We are aware, and how such matters end.
Yet shall be told no meagre passion here;
With lovers such as we forevermore
Isolde drinks the draught, and Guinevere
Receives the Table’s ruin through her door,
Francesca, with the loud surf at her ear,
Lets fall the colored book upon the floor.

The Fall of Rome

The piers are pummelled by the waves;
In a lonely field the rain
Lashes an abandoned train;
Outlaws fill the mountain caves.

Fantastic grow the evening gowns;
Agents of the Fisc pursue
Absconding tax-defaulters through
The sewers of provincial towns.

Private rites of magic send
The temple prostitutes to sleep;
All the literati keep
An imaginary friend.

Cerebrotonic Cato may
Extol the Ancient Disciplines,
But the muscle-bound Marines
Mutiny for food and pay.

Caesar’s double-bed is warm
As an unimportant clerk
Writes I DO NOT LIKE MY WORK
On a pink official form.

Unendowed with wealth or pity,
Little birds with scarlet legs,
Sitting on their speckled eggs,
Eye each flu-infected city.

Nona Blyth Cloud has lived and worked in the Los Angeles area for the past 50 years, spending much of that time commuting on the 405 Freeway. After Hollywood failed to appreciate her genius for acting and directing, she began a second career managing non-profits, from which she has retired. Nona has now resumed writing whatever comes into her head, instead of reports and pleas for funding. She lives in a small house overrun by books with her wonderful husband.
View all posts by wordcloud9 →
This entry was posted in National Poetry Month, Poetry, The Coffee Shop and tagged Bai Juyi, Beatles - Taxman, Death Taxes and Poetry, Edna St. Vincent Millay, Tax Day - April 15, TCS, W.H. Auden. Bookmark the permalink.
Loading Comments...
%d bloggers like this: