A Tall Ship and a Star to Steer Her By

John Masefield (1878-1967) was born on June 1, in land-locked Ledbury, a Herefordshire market town, the son of Caroline and George Masefield, a solicitor. His mother died giving birth to his sister when Masefield was only six, and he went to live with an aunt. His father died soon after. After four unhappy years as a boarder at the King’s School in Warwick, another land-locked place, he left to train for a life at sea, aboard HMS Conway. His disapproving aunt hoped this would break his addiction to reading. She must have been disappointed that during his years on board the Conway, he spent much of his time reading, writing, and listening to yarns told by his shipmates. In 1894, Masefield boarded the Gilcruix, destined for Chile – a voyage so rough that for the first time he experienced prolonged sea sickness. He still recorded his experiences in journal entries: his delight in seeing flying fish, porpoises, and birds; awe at nature’s beauty; a rare sighting of a nocturnal rainbow. He left the sea near the end of 1895, and worked a series of jobs – in a carpet factory, as a journalist, and overseeing a fine arts exhibition. In 1902, his first volume of poetry, Salt-Water Ballads, was published, which included his most famous poem, “Sea-Fever.” 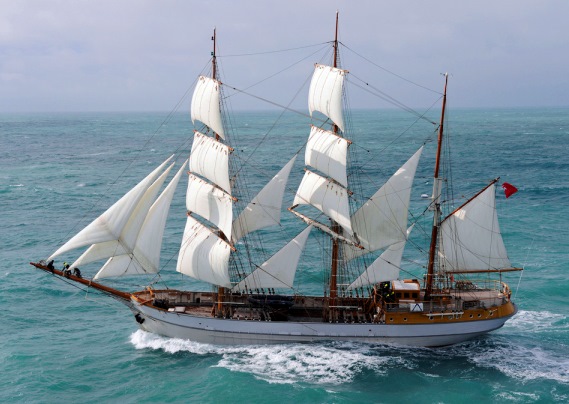 I must go down to the seas again, to the lonely sea and the sky,
And all I ask is a tall ship and a star to steer her by;
And the wheel’s kick and the wind’s song and the white sail’s shaking,
And a grey mist on the sea’s face, and a grey dawn breaking.

I must go down to the seas again, for the call of the running tide
Is a wild call and a clear call that may not be denied;
And all I ask is a windy day with the white clouds flying,
And the flung spray and the blown spume, and the sea-gulls crying.

I must go down to the seas again, to the vagrant gypsy life,
To the gull’s way and the whale’s way where the wind’s like a whetted knife;
And all I ask is a merry yarn from a laughing fellow-rover,
And quiet sleep and a sweet dream when the long trick’s over.

Nona Blyth Cloud has lived and worked in the Los Angeles area for the past 50 years, spending much of that time commuting on the 405 Freeway. After Hollywood failed to appreciate her genius for acting and directing, she began a second career managing non-profits, from which she has retired. Nona has now resumed writing whatever comes into her head, instead of reports and pleas for funding. She lives in a small house overrun by books with her wonderful husband.
View all posts by wordcloud9 →
This entry was posted in Poetry and tagged A Tall Ship and a Star to Steer Her By, John Masefield, Sea Fever. Bookmark the permalink.