A Rhyme for Halloween

October 31, to the delight of children, has become a candy scavenge in the U.S. Our celebrations of the eerie and macabre are pretty bland compared to the holiday’s origins, but as long as people gather in the dark to scare each other with spooky stories, we won’t have entirely lost the awe and mystery of Samhain / Samhuin (SAH-win or  SOW-in – rhymes with cow).

Tales of the supernatural have always held a fascination for humankind, be they about ghosts, witches, fairies, the dead – or the undead – or ‘things that go bump in the night.’

Maurice Kilwein Guevara (1961 – ) was born in Belencito, Colombia, but his family moved to Pittsburgh when he was two years old. He is a founding member of the National Latino Writers’ Association, and has published four volumes of poetry. Guevara has a real gift for words that shiver up your spine. 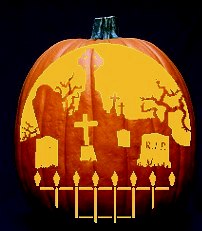 A Rhyme for Halloween

Tonight I light the candles of my eyes in the lee
And swing down this branch full of red leaves.
Yellow moon, skull and spine of the hare,
Arrow me to town on the neck of the air.

I hear the undertaker make love in the heather;
The candy maker, poor fellow, is under the weather.
Skunk, moose, raccoon, they go to the doors in threes
With a torch in their hands or pleas: “O, please . . .”

Baruch Spinoza and the butcher are drunk:
One is the tail and one is the trunk
Of a beast who dances in circles for beer
And doesn’t think twice to learn how to steer.

Our clock is blind, our clock is dumb.
Its hands are broken, its fingers numb.
No time for the martyr of our fair town
Who wasn’t a witch because she could drown.

Now the dogs of the cemetery are starting to bark
At the vision of her, bobbing up through the dark.
When she opens her mouth to gasp for air,
A moth flies out and lands in her hair.

The apples are thumping, winter is coming.
The lips of the pumpkin soon will be humming.
By the caw of the crow on the first of the year,
Something will die, something appear.

“A Rhyme for Halloween” from Poems of the River Spirit. © 1996 by Maurice Kilwein Guevara – University of Pittsburgh Press

Nona Blyth Cloud has lived and worked in the Los Angeles area for the past 50 years, spending much of that time commuting on the 405 Freeway. After Hollywood failed to appreciate her genius for acting and directing, she began a second career managing non-profits, from which she has retired. Nona has now resumed writing whatever comes into her head, instead of reports and pleas for funding. She lives in a small house overrun by books with her wonderful husband.
View all posts by wordcloud9 →
This entry was posted in Poetry and tagged A Rhyme for Halloween, Halloween, Jack-o-Lanterns, Maurice Kilwein Guevara, October 31. Bookmark the permalink.

3 Responses to A Rhyme for Halloween