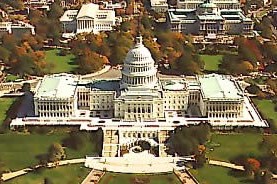 In February, The Nation posted an interesting article about political lobbyists on its website. In the article titled Where Have All the Lobbyists Gone?, Lee Fang tells an interesting tale about the declining number of  registered lobbyists in our nation’s capital. Fang said that in January, records indicated that the overall spending on lobbying had decreased for the third straight year. He added that lobbyists “continue to deregister in droves”—and that in 2013, the number of registered lobbyists had “dipped to 12,281, the lowest number on file since 2002.”

One might think that this is good news—that lobbyists are leaving Washington, D.C. Unfortunately, one has but to dig a little deeper to find out what has really been going on.

But experts say that lobbying isn’t dying; instead, it’s simply going underground. The problem, says American University professor James Thurber, who has studied congressional lobbying for more than thirty years, is that “most of what is going on in Washington is not covered” by the lobbyist-registration system. Thurber, who is currently advising the American Bar Association’s lobbying-reform task force, adds that his research suggests the true number of working lobbyists is closer to 100,000.

A loophole-ridden law, poor enforcement, the development of increasingly sophisticated strategies that enlist third-party validators and create faux-grassroots campaigns, along with an Obama administration executive order that gave many in the profession a disincentive to register—all of these forces have combined to produce a near-total collapse of the system that was designed to keep tabs on federal lobbying.

Fangs said that while the “official figure” put the annual spending on lobbying in 2013 at $3.2 billion, “Thurber estimates that the industry brings in more than $9 billion a year.” Fang also said that experts other than Thurber have arrived at similar estimates. According to Fang, “Lee Drutman, a lobbying expert at the Sunlight Foundation, says that at least twice as much is spent on lobbying as is officially reported.”

The Nation reviewed trade association documents, bankruptcy filings, and reports from political consulting firms, which showed that “many of America’s largest corporations have spent much more on lobbying than they’ve officially disclosed. Fang said, “In some cases, the quarterly registration system, used by the public and journalists, shows only one-tenth of the amount that firms spend to win favorable treatment by the federal government.”

This explosion in spending on lobbying activities may not be visible in the lobbyist-registration system, but it is evident in Washington. The growth of the influence industry has created a new generation of millionaires while reshaping the region in its wake. The District of Columbia skyline, once dominated by monuments, is now dotted with cranes building some $5.5 billion in new development. The 14th Street and H Street corridors, formerly gritty sections of the city, are lined with more than forty new bars and restaurants. Census figures show that four of the five wealthiest counties in the country are now DC suburbs. In one of those counties—
Fairfax—high-end carmakers Tesla and Aston Martin have opened new showrooms to keep up with demand.

In his article, Fang went on to name a number of the new captains of the influence-peddling industry who “lobby openly and with no interest in registration”—and who are “reaping enormous rewards.” One of those “new captains” is Tim Pawlenty, a former Republican governor of Minnesota, who now heads a lobbying association for financial companies. Pawlenty, who is not a registered lobbyist, reportedly earns “over $1.8 million a year working largely on banking regulations. “

Another “influence peddler” is Chris Dodd, a former Democratic Senator from Connecticut, “who pledged not to become a lobbyist once he retired from Congress in 2010.” Fang said that Dodd earned “$3.3 million in his second year as chief of the movie industry lobby.” Fang noted that Dodd hasn’t “technically” broken his pledge because he isn’t a “registered” lobbyist.

It appears that these new non-lobbyist lobbyists may have taken a page from spin doctor Frank Luntz’s book of “how to use/misuse language” to help sell a political candidate, one’s product, or to manipulate public opinion on an issue. Fang said that instead of using the L-word to describe what they do, many lobbyists now “prefer the more banal rubric of ‘government relations’ or ‘government affairs.’” Fang added, “Reflecting this trend, the American League of Lobbyists—a professional association for the industry—changed its name in November to the Association of Government Relations Professionals. And while registered lobbyists must report payments from clients, those ducking the system quietly bring in the biggest paydays.”

Fang’s article is a long and meaty one. I’d suggest that those who are interested in the subject of what is going on with lobbying in Washington, D.C., read the entire piece.

Where Have All the Lobbyists Gone?: On paper, the influence-peddling business is drying up. But lobbying money is flooding into Washington, DC, like never before. What’s going on? by Lee Fang (The Nation)

Because it’s National Poetry Month, I decided to post a poem that I wrote about lobbying several years ago.

This entry was posted in Politics, United States and tagged Lobbying, Lobbyists, Money in Politics. Bookmark the permalink.