A Scene from Post Racial America: Halloween “Lynching” Display at Fort Campbell Removed from Yard of Home on the Army Base in Kentucky

Posted on November 1, 2014 by Elaine Magliaro

Earlier this week, military officials removed a “horrific” Halloween lynching display that had been set up in the yard of the on-base home of an active-duty soldier at Fort Campbell, Kentucky. The “jarring” scene appeared to depict an African American family—two adults and one child—hanging from a tree by their necks. The child was reported to have a knife stuck in its back. According to Salon, there was another child in the display that “appeared to try to help one of the adults.” 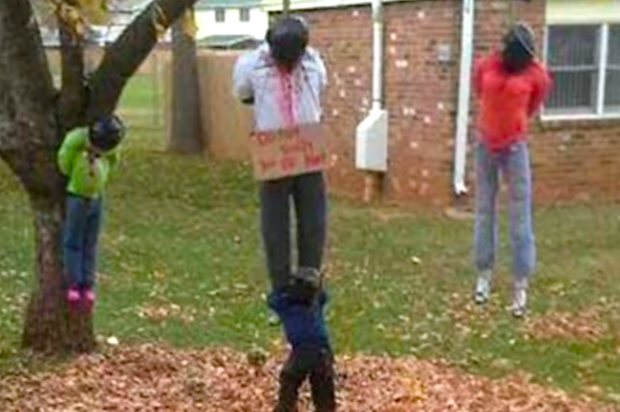 Brendalyn Carpenter, a spokesperson for the army base, said that authorities “removed the display after being alerted to an ‘offensive’ Halloween decoration.” She told ClarksvilleNow.com, “Displays of an offensive nature are not reflective of Army values and the family-friendly environment provided for employees and residents of the Fort Campbell community.”

A Halloween display in front of an active-duty soldier’s Fort Campbell, Kentucky, residence that featured effigies with black trash bags as heads hanging by their necks from a tree was removed Tuesday, shortly after base officials were informed of the decorations.

Army Times reported that officials at the base “contacted the home’s occupant and relayed concerns raised by community members…” Carpenter said that the homeowner “willingly removed the decorations.” She added, “Personnel from the Installation Provost Marshal’s office investigating the scene determined that the decorations exceed installation and community standards and should be removed.”

Luke Brinker (Salon) said that the “lynching” display at Fort Campbell “refocuses attention on racism within the U.S. military, a problem that the Defense Department has redoubled efforts to address in recent years.” He noted that Reuters had reported back in 2012 that “neo-Nazis, white supremacists and skinheads” had “urged supporters to enlist in the U.S. Army and Marine Corps…” They argued that joining the military would “instill the skills and know-how required for what they consider an imminent race war.”

Aug 21 (Reuters) – They call it “rahowa” – short for racial holy war – and they are preparing for it by joining the ranks of the world’s fiercest fighting machine, the U.S. military.

White supremacists, neo-Nazis and skinhead groups encourage followers to enlist in the Army and Marine Corps to acquire the skills to overthrow what some call the ZOG – the Zionist Occupation Government. Get in, get trained and get out to brace for the coming race war.

If this scenario seems like fantasy or bluster, civil rights organizations take it as deadly serious, especially given recent events. Former U.S. Army soldier Wade Page opened fire with a 9mm handgun at a Sikh temple in Wisconsin on Aug. 5, murdering six people and critically wounding three before killing himself during a shootout with police.

The U.S. Defense Department as well has stepped up efforts to purge violent racists from its ranks, earning praise from organizations such as the Southern Poverty Law Center, which has tracked and exposed hate groups since the 1970s.

According to Reuters, “Academics who study white supremacists say proponents of the ‘infiltration strategy’ of joining the U.S. military have adapted, telling skinheads to deceive military recruiters by letting their hair grow, avoiding or covering tattoos, and suppressing their racist views.” Carter F. Smith, a former military investigator who is now a professor of criminal justice at Austin Peay State University in Tennessee, told Reuters that the military needs a “comprehensive strategy” for neo-Nazis and gang members “who get past the screeners.” Smith said, “They are some of the most disciplined soldiers we have. They really want to learn to shoot those weapons. The problem wasn’t just that we were opening the floodgates to let them in. We let them out after prosecution or when their time was up and we didn’t let the police know.”

Horrific “lynching” display removed from home on Kentucky Army base: The display refocuses attention on racism within military ranks (Salon)

U.S. Army battling racists within its own ranks (Reuters)

61 Responses to A Scene from Post Racial America: Halloween “Lynching” Display at Fort Campbell Removed from Yard of Home on the Army Base in Kentucky