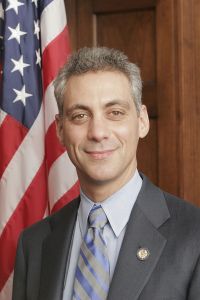 Investigative journalist David Sirota reported earlier this week that Chicago Mayor Rahm Emanuel, a former chief of staff to President Obama, has accepted campaign contributions from financial firms that manage the city’s pension money. Sirota said that, according to documents that were reviewed by the International Business Times, executives who work at the investment firms have, since 2011, “poured more than $600,000 in contributions into Mayor Rahm Emanuel’s campaign operation and political action committees (PACs) that support him…” Sirota added that legal experts have claimed that these “contributions appear to flout federal rules banning companies that manage pension funds from financing the campaigns of officials with authority over pension systems…”

Sirota also noted that the contributions may “potentially conflict with an executive order Emanuel himself signed in 2011 prohibiting city contractors and subcontractors from making campaign donations to city officials.”

According to Sirota, at least 31 executives at firms “that harvest fees by managing city pension funds have contributed to his campaign and associated PACs.” He said that the “list of donors includes Kelly Welsh, a Northern Trust executive who was recently appointed by President Obama to the top legal position in the U.S. Commerce Department.”

Sirota said that Welsh “handed over $5,000 in December 2012” to Emanuel’s campaign war chest. He added that “additional details place Welsh at the center of a simmering controversy over potentially improper relationships influencing the investment of American public pension funds: The day he wrote that check, Welsh was a senior executive at Northern Trust, an enormous financial services firm that had contracts to invest money for the Chicago pension system. That appeared to conflict with the objectives of federal rules barring campaign contributions to municipal officials from executives at companies that manage municipal retirement funds.”

Sirota said that in his new job as chief counsel at the United States Department of Commerce, Welsh will presumably be “expected to take special heed of federal laws.”

Former prosecutors, corporate compliance attorneys and erstwhile officials at the Securities and Exchange Commission describe the donations as a clear breach of the spirit — and perhaps the letter — of the SEC’s so-called pay-to-play rule, which seeks to prevent pension investments from being doled out as a form of patronage to those who contribute to campaigns.

After the Chicago campaign contributions were described to him, former SEC chairman Arthur Levitt told IBTimes, “The management of municipal pensions should be totally transparent and free of political influence. The acceptance of contributions by city officials from advisers managing city funds, in my book, smells like bribery.”

Sirota reported that former prosecutors and SEC lawyers have said that “the Chicago situation exemplifies a troubling national trend: Mayors and governors are taking office through, in part, the largesse of financial services companies that bankroll their campaigns, then using their newfound authority over pension systems to put public money into the hands of their donors.” Melanie Sloan, a former federal prosecutor in the Clinton administration who now runs the group Citizens for Responsibility and Ethics in Washington, said, “It looks like these contributions to Rahm Emanuel violate the pay-to-play prohibitions. This is looking like a more significant problem throughout the country. Politicians are treating these rules as if they are meaningless and it is time for regulators to take action against all the violators. The SEC needs to step in and shut this down.”

The contributions to Emanuel from financial firms that manage municipal pension funds — the retirement savings for city teachers, police, firefighters and other municipal employees — appear to conflict with the objectives of the SEC’s pay-to-play rule, which the commission enacted three years ago after a major pension corruption scandal in New York.

“Elected officials who allow political contributions to play a role in the management of these assets and who use these assets to reward contributors violate the public trust,” the agency declared in announcing the rule. “They undermine the fairness of the process by which public contracts are awarded… They can harm pension plans that may subsequently receive inferior advisory services and pay higher fees. Ultimately, these violations of trust can harm the millions of retirees that rely on the plan.”

The rule specifically prohibits financial firms from earning fees from public pension funds if their executives make campaign donations to the public officials who can exert influence over pension investments.

Sirota said that legal experts told IBTimes that “Emanuel qualifies as such an official… because he and his administration appoint trustees to the boards that manage the $23 billion in Chicago’s six municipal pension funds.”

Jay DuBow, a former attorney in the SEC’s division of enforcement, said that the SEC rule means, “You can either influence elections, or you can run funds that manage money for public entities. You cannot do both.”