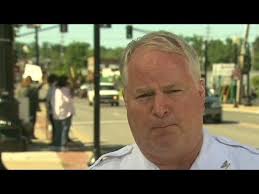 The Justice Department released two reports today. In one report, the DOJ explained why it does not plan to “pursue federal civil rights charges against Darren Wilson, the white police officer, who shot and killed Michael Brown, an unarmed black 18-year-old, in Ferguson, Mo., last August.” The DOJ found that Officer Wilson’s actions did not “constitute a prosecutable violation” and there was no evidence upon which prosecutors could “rely to disprove Wilson’s stated subjective belief that he feared for his safety.”

According to Sara Horwitz (Washington Post), the second report released by the DOJ contained “seven racist e-mails written by Ferguson police and municipal court officials.”  Horowitz said that a “November 2008 e-mail, for instance, stated that President Obama could not be president for very long because ‘what black man holds a steady job for four years.'”

Another e-mail described Obama as a chimpanzee. An e-mail from 2011 showed a photo of a bare chested group of dancing women apparently in Africa with the caption, “Michelle Obama’s High School Reunion.”

The Justice Department did not specifically identify who wrote the e-mails and to whom they were sent, but said they were written by police ad court supervisors who are currently employed by the city.

Horowitz said that although federal officials will not bring civil rights charges against Officer Darren Wilson, “they see their broad civil rights investigation into the troubled Ferguson police department as the way to force significant changes in Ferguson policing.”

Attorney General Eric H. Holder Jr. was quoted as saying: “As detailed in our report, this investigation found a community that was deeply polarized, and where deep distrust and hostility often characterized interactions between police and area residents. Our investigation showed that Ferguson police officers routinely violate the Fourth Amendment in stopping people without reasonable suspicion, arresting them without probable cause, and using unreasonable force against them. Now that our investigation has reached its conclusion, it is time for Ferguson’s leaders to take immediate, wholesale and structural corrective action. The report we have issued and the steps we have taken are only the beginning of a necessarily resource-intensive and inclusive process to promote reconciliation, to reduce and eliminate bias, and to bridge gaps and build understanding.”

The Justice Department report “says blacks in Ferguson, Missouri, are disproportionately subject to excessive police force, baseless traffic stops and citations for infractions as petty as walking down the middle of the street.”

With scathing findings of a months-long investigation being released, attention now turns to Ferguson as the city confronts how to fix racial biases that the federal government says are deeply rooted in the police department, court and jail.

The full report could serve as a roadmap for significant changes by the department, which commanded national attention after one of its officers shot and killed an unarmed black 18-year-old, Michael Brown, last summer. City officials said they expected to discuss the report once it’s released Wednesday.

John Gaskin III, a St. Louis community activist, said, “It’s quite evident that change is coming down the pike. This is encouraging. It’s so unfortunate that Michael Brown had to be killed. But in spite of that, I feel justice is coming.”

According to CBS, there were others individuals who said that “the federal government’s findings confirmed what they had long known and should lead to change in the police department leadership.”

In an interview with CBS last month, Ferguson Police Chief Tom Jackson told news correspondent Dean Reynolds that “he believes his department is misunderstood.” Jackson insisted that there was no racial problem in the Ferguson Police Department.