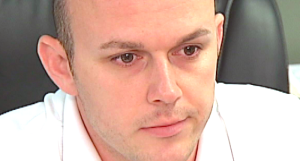 Detective Cory Golightly, a sheriff’s deputy from western Kentucky, has been placed on paid administrative leave after accidentally shooting his mother with a personal weapon during a wedding ceremony at the Bardwell Baptist Church in Carlisle County.

WPSD reported that Mike Collins, who is on the Bardwell Fire Department and the custodian for the church, heard the call come into the station. Collins said that he rushed over to the church to see what had happened. He said that all of the witnesses said that they saw the same thing. Collins said that Golightly “was adjusting his jacket. The gun and holster fell out of his jacket and accidentally went off and shot her.”

Jenine King, one of the witnesses said, “My initial reaction was, ‘Oh my goodness. Could that possibly be a gun?’ Then my next thought was, ‘Gosh, who’s in the church with a gun?’” King added that “once she heard Golightly call for his mom, she knew something was really wrong.”

According to reports, Golightly “tended to his mother before medical crews arrived.” The deputy’s “mother was listed in stable condition at a Nashville, Tennessee, hospital.”