Norman Solomon Writes about Jeffrey Sterling and the CIA: “An Untold Story of Race and Retribution” 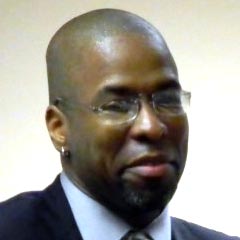 Norman Solomon has an article titled Jeffrey Sterling vs. the CIA: An Untold Story of Race and Retribution over at ExposeFacts. Sterling is the former CIA officer and whistleblower who was convicted of leaking classified information to New York Times reporter James Risen about “Operation Merlin”–a failed U.S. effort to undermine Iran’s nuclear program.” Earlier this month, Sterling was sentenced to serve 42 months in prison.

NOTE: Solomon is the individual who produced the documentary “The Invisible Man: NSA Whistleblower Jeffrey Sterling” for ExposeFacts.

Risen is the investigative journalist who exposed how “Operation Merlin” could have actually aided the Iranian nuclear program. The US government claimed that Sterling had violated the Espionage Act by revealing details about that covert operation during the Clinton Administration, which “was to provide Iran with flawed designs for nuclear weapons components, ostensibly to delay the alleged Iranian nuclear weapons program, or frame Iran.

In his article at ExposeFacts, Solomon tells about how Jeffrey Sterling “was in the midst of a protracted and fruitless effort to find someone in Congress willing to look into his accusations about racial discrimination at the agency” a dozen years prior to his recent sentencing.

ExposeFacts.org has obtained letters from Sterling to prominent members of Congress, beseeching them in 2003 and 2006 to hear him out about racial bias at the CIA. Sterling, who is expected to enter prison soon, provided the letters last week. They indicate that he believed the CIA was retaliating against him for daring to become the first-ever black case officer to sue the agency for racial discrimination.

Solomon said that Sterling had begun “reaching out toward Capitol Hill about his concerns” as early as 2000. According to Solomon, Sterling said that he had “received a positive response from House member Julian Dixon (D-Calif.), a former chair of the Congressional Black Caucus, who expressed interest in pursuing the matter of racial discrimination at the CIA and contacted the agency about his case.” Unfortunately, Dixon died from a heart attack on Dec. 8, 2000.

Sterling recalls getting special firing treatment in early 2002 from John Brennan, then a high-ranking CIA executive, now the agency’s director and a close adviser to President Obama: “He personally came down to the administrative office to tell me that I was fired. Someone told me that, ‘Well, you pulled on Superman’s cape.’”

Sterling reportedly received “no support from civil rights organizations.” The CIA fired him in January 2002 “after many months of administrative limbo.” Solomon said that Sterling’s “letters the following year reflected escalating disappointment and anger at an absence of interest from members of Congress as well as from civil rights organizations including the Rainbow Push Coalition and the NAACP.” According to Solomon,  Sterlings’ letters went unanswered.

“It has … become apparent there is a general fear of taking on the CIA,” said a June 26, 2003 letter from Sterling to the then-chair of the Congressional Black Caucus, Elijah Cummings (D-Md.). “As a result, I have been engaged in a solitary and completely one-sided battle against the Agency that has left me ruined. There has been no one to stand with me either out of fear or ignorance. At every turn, the Agency has attempted to denigrate me and get rid of my case.” (Sterling’s lawsuit was to continue along a convoluted judicial path for over two more years, until a court finally dismissed it on grounds that a trial would reveal state secrets.)

Sterling said that he never got a reply from Rep. Cummings. Cummings’ press secretary told Solomon that the Congressman did not recall “receiving such a letter.”

Solomon reported that Sterling’s letter to Cummings came just two months “after the White House had succeeded at persuading the Times management not to publish Risen’s story on Operation Merlin.” Solomon added, “Meanwhile, the government was searching for someone to blame for the leak.” In his letter, Sterling wrote, “Now it seems I am part of a leak investigation being conducted by FBI…Apparently, information related to very sensitive operations I was instrumental in conducting was leaked to the press thereby causing the FBI to launch an investigation.”

The letter added: “As I have absolutely nothing to hide, I agreed to meet with the FBI to show my veracity and assist in their investigation. During that meeting, it was apparent that CIA has been instrumental in pointing the finger directly at me as a source of this leak. Though the FBI Agents conducting the session emphasized that I was not the target of their investigation, it was more than obvious to me that I will be the one to eventually take the fall.”

It appears that Sterling may indeed have become the “fall guy.” Solomon said that testimony during “Sterling’s trial showed that the FBI did little or no investigation of other individuals who had extensive knowledge of Operation Merlin.” As an example, Solomon noted that Pat Roberts (R-KS)–who was then-chair of the Senate Intelligence Committee–“shielded the committee’s chief of staff by successfully insisting that the FBI not interview him about the leak — even though, or perhaps because, investigators viewed the committee’s chief of staff as a key suspect.” Solomon said that testimony from the trial “showed that the FBI had initially suspected that the leak came from the Senate committee staff.”

At the CIA and the Justice Department, authorities routinely depicted Jeffrey Sterling as a “disgruntled” employee. During interviews for “The Invisible Man,” he addressed how that depiction has played out for him: “I think the label ‘disgruntled’ came from the moment that I complained, in any aspect. I was not being part of the team. … People say that individuals play the race card. What about the other side of that? The race card was certainly being played with me. And you can say it was the white race card because I wasn’t white. They had all those cards. … And if there isn’t going to be a true, real, honest investigation with any veracity, the natural conclusion is going be ‘disgruntled.’ It’s a very easy label to place.”

I think there has been a true miscarriage of justice in the case of Jeffrey Sterling. It hasn’t gotten a lot of coverage in the mainstream media. That’s why I have written about it on more than one occasion.

Click on the link to read the full text of Norman Solomon’s article Jeffrey Sterling vs. the CIA: An Untold Story of Race and Retribution.

Further Reading from Flowers for Socrates

What You Should Know about “Operation Merlin,” Jeffrey Sterling, the CIA, the Obama Administration and Whistleblowers

CIA Whistleblower Jeffrey Sterling’s “Trial by Metadata”: Does It Set a Dangerous Precedent for Free Speech Rights in the United States?

Unequal Justice in America?: General Petraeus Gets a Slap on the Wrist for Leaking Classified Information…While Former CIA Officer Jeffrey Sterling Gets 42 Months in Prison (VIDEO)