Getting a Religious High in the Hoosier State?: First Church of Cannabis Granted Tax-Exempt Status in Indiana (VIDEO) 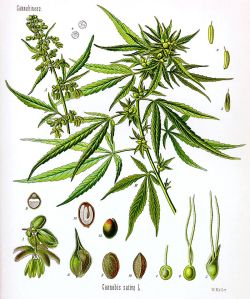 Crooks and Liars wrote, “The intent of the Religious Freedom Restoration Act (RFRA) in Indiana was to allow the free exercise of ‘religious freedom,’ which was highly contested and revised due to public outcry. That’s because the bill was viewed as a license to discriminate against homosexuality. But this religious freedom act opened Indiana up for other churches, some being rather unorthodox.”

It appears that the new Indiana RFRA law HAS opened up the state to at least one unorthodox church already. Jessica Firger (Newsweek) reported last week that the Internal Revenue Service had granted nonprofit tax-exempt status “to a religious organization in Indianapolis known as the First Church of Cannabis.” Bill Levin, the founder of the church, told the Washington Times that the IRS had notified him the previous week of “his organization’s newly approved 501(c)(3) status, which will allow individual federal tax write-offs for people who make charitable donations to the church.”

Firger said that members of the First Church of Cannabis “believe that smoking marijuana is a religious observance.” She noted that marijuana use–whether for recreational or medical purposes–is still illegal in the Hoosier State.

Firger said Levin, who calls himself the church’s minister of love, “told the media that he decided to found the church this year partly because he wanted to test out Indiana’s new Religious Freedom Restoration Act, which is meant to protect all people’s religious practices from government intervention.” Firger pointed out that it is “the same legislation that could potentially allow business owners to refuse services to gay couples.”

Levin reportedly plans to hold his church’s first service on July 1st—the day when the Indiana RFRA law goes into effect. Firger said, “The entire congregation plans to light up after prayers have been said.”

Sky Palma (Dead State) said, “The church still can’t buy or sell marijuana under the law, but Bill Levin, the self-described Minister of Love and Grand Pooba, says parishioners will still be allowed to smoke-out during church services.”

John Tuohy (Indianapolis Star) said that the First Church of Cannabis could “be the first tax-exempt religious organization focusing on pot.” Tuohy added, “Legal experts had said it was inevitable that someone would test the controversial religious freedom law, and Levin has said he was eager to see if police would pinch him for toking in church.”

If Levin does go through with the ceremony and is prosecuted, he would need to prove to a judge that his church was a legitimate religion to get protection under the state’s religious-freedom act, said Robert Katz, a law professor at the Indiana University Robert H. McKinney School of Law.

“One thing the court would look at is the history of the church,” Katz said. “Churches with a long established history would be looked at more favorably.”

Tuohy added that Indiana’s RFRA, which was ostensibly designed to protect religion from government infringement, drew national attention when critics viewed it as a tool that would potentially “allow business owners to refuse service to same-sex couples.”

2 Responses to Getting a Religious High in the Hoosier State?: First Church of Cannabis Granted Tax-Exempt Status in Indiana (VIDEO)