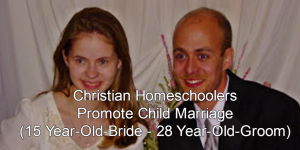 Thamiel Rosenkreuz has an interesting article over at If You Only News titled If She Bleeds, She Breeds: Christian Home Schoolers Debate Merits of Child Marriage. In her article, Rosenkreuz claimed that “parents are not always capable of choosing what’s in the best interest of their child. She added that “nowhere is that more obvious than the Christian homeschooling movement, where a debate is current broiling over the idea of a minimum age for marriage.”

Rosenkreuz said the evidence that there was a debate on the subject of the minimum age for marrying among homeschoolers “first surfaced with a Facebook post made by homeschooling advocate, right-wing whackjob, Christian theocrat, and leader of the Home School Defense League, Michael Farris.” She noted that after doing some research, she found that the problem ran deeper—and “straight to the rotten core of that entire subculture.”

In a post to his Facebook page, Michael Farris, Chairman of the Home School Legal Defense Association, issued a statement expressing concern about “a very serious problem” that he sees “surfacing in Christian and conservative circles.”

The problem: the “minimum age for marriage” and the prospect of parental sanctioned child marriage.

In his statement, Farris expressed concern about what he called “a growing tendency in the Christian and conservative movement to be seduced by a spirit of anarchy” as it relates to laws prohibiting child marriage and protecting children.

The way we test the propriety of a proposed legal rule is to take the rule to its extreme and see how we like the results. So I asked whether a parent should be permitted to give their permission to allow a 7 year old to be married to a 30 year old pedophile. The legal issue is the same whether or not there is a “dowry” (cash payment) offered by the “bridegroom.”

Though they are exceedingly rare, there are parents who would permit this kind of outrageous transaction. Such a plan is inherently evil and should be punished.

Stone also pointed out that child marriage “is always about a young woman (girl) marrying a much older man. The transaction is facilitated by the parents of the bride, and sometimes monetary payments figure into the transaction.”

Earlier this year, in yet another tale of horror from the Christian homeschool movement, a young woman explained how she narrowly escaped child marriage after being sold by her family for $25,000 into an arranged marriage to a man twice her age.

Yet the threat of child marriage is not the only hazard faced by children forced into the dark and sometimes dangerous world of Christian homeschooling. One need only recall the tragic life and death of Leelah Alcorn, or the tragic circumstances of the Duggar family, to recognize the dangers inherent in the Christian homeschool.

NOTE: Leelah Alcorn was a transgender teenager who committed suicide by stepping in front of a moving tractor trailer truck after enduring “years of abuse and rejection from strict Christian parents.”

Leelah Alcorn, also known as Joshua Alcorn, was struck and killed by a passing semitrailer on southbound Interstate 71 in Union Township Sunday morning. The tragic event appears not to have been an accident, but a suicide.

On her blog at Tumblr, Leelah left a poignant suicide note, detailing a life of pain and rejection, a life dominated by Christian parents who refused to understand, or simply could not understand, that their precious child was a female trapped in the body of a male.

A homeschooling horror story about the Home School Legal Defense Association (HSLDA), which was co-founded by Michael Farris:

HSLDA: Man Who Kept Children in Cages “a Hero” (Patheos)

In other words, when faced with accusations of child abuse against Gary Gravelle, a homschooling father, HSLDA attorney Scott Somerville declared Gravelle “a hero.” Why? Presumably because of he had adopted special needs children. But what actually happened in the Gravelle home? Let’s take a look:

The Gravelles’ children told [Lt. Randy] Sommers of punishments including ”spankings with a board, name calling and being held under water,” Sommers said.

One boy said he had ”his face shoved against a bathroom wall until his nose bled,” Sommers testified.

The sleeping arrangements for some of the children were homemade enclosures made with wood and chicken wire that had alarms on the doors. County authorities call the enclosures ”cages,” while the Gravelles say they were enclosed beds used to protect the children.

The children would soil their beds rather than open the door and go to the bathroom because they did not want to trigger the alarm, they also told the investigator. Another boy told the detective he was forced to write ”in long hand” a book out of the Bible before he was allowed out of his enclosed bed, Sommers testified.

When asked whether he believed the children’s accounts, Sommers said he did because many of the stories were repeated by more than one child.

I think this is all very disturbing…don’t you?

If She Bleeds, She Breeds: Christian Home Schoolers Debate Merits of Child Marriage (If You Only News)