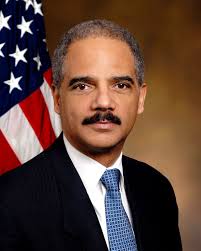 Earlier today, award-winning journalist Matt Taibbi was interviewed on Democracy Now! Taibbi talked about Eric Holder, the former Attorney General of the United States, and the revolving door between Wall Street and Washington. Holder is reportedly “returning home — to the corporate law firm Covington & Burling, where he worked for eight years before becoming head of the Justice Department.” Democracy Now! noted that during Holder’s time at Covington, his “clients included UBS and the fruit giant Chiquita.” According to Democracy Now!, the “law firm’s client list has included many of the big banks Holder failed to criminally prosecute as attorney general for their role in the financial crisis, including Bank of America, JPMorgan Chase, Wells Fargo and Citigroup.” Tabby said he thought this was “probably the single biggest example of the revolving door that we’ve ever had.”

Excerpt from the Democracy Now! interview:

AMY GOODMAN: So you were tweeting up a storm yesterday as this news came of the former attorney general, Eric Holder, going back to Covington & Burling. Talk about the significance of this.

MATT TAIBBI: Yeah, I mean, I think this is probably the single biggest example of the revolving door that we’ve ever had. And we’ve had some whoppers in our past. I think previously the worst one was probably Louisiana Congressman Billy Tauzin leaving Congress and taking a $2-million-a-year job with PhRMA, right after he helped pass the prescription drug benefit bill. But what Holder just did just blows Tauzin away. I mean, he spent six years essentially guiding all of these Wall Street firms, which many of them are clients of this company that he’s now working for—he guided them all back to profitability. He allowed bankers to escape prosecution. And now he’s going right back to that firm, where he’s going to enjoy a very lucrative partnership, whether he ever works again, you know, for the rest of his life.

JUAN GONZÁLEZ: Could you explain what those are and how they worked?

MATT TAIBBI: Yeah, Holder, in general, pioneered a number of different ways that essentially a lot of these too-big-to-fail companies were allowed to buy their way out of trouble. And one of the most notorious, I think, was that he concluded a number of the biggest settlement deals with banks like JPMorgan Chase in ways that were not reviewed by a judge. Because we did have some instances during this time period where pesky judges—I think one of the most infamous, in the eyes of Wall Street, was Jed Rakoff, who threw out a settlement with Citigroup because he thought it wasn’t harsh enough—well, to fix that problem, Holder just started striking deals and not submitting them for judicial review. So he did a $13 billion settlement with JPMorgan Chase where no judge signed off on the deal. The whole thing was done in secret. He essentially institutionalized the back room. This was just a deal where a bunch of bankers got together with a bunch of Justice Department officials, money changed hands, and that was it. The whole—all of their criminal problems went away. This is a very different way of doing business than what we’ve ever seen before, and it’s very dangerous, I think…

JUAN GONZÁLEZ: Can you talk also about how the Justice Department and other regulatory groups have changed the composition of the staffing, the high-level staffing, of these agencies during this period when Holder has been there?

MATT TAIBBI: Yeah. This is something that I heard over and over again over the years, which is that a certain kind of person who used to work in the regulatory agencies, you know, who was a kind of a career civil servant, particularly the law enforcement types, the people who grew up through the ranks, you know, just trying to get the criminal at all costs—they’re primarily motivated by trying to extract justice from wrongdoers—that kind of person is gradually disappearing from the ranks of the regulatory bodies, and they are being replaced, increasingly, particularly at the higher levels, by people from the corporate defense community. And Holder was very profoundly a symbol of that kind of person.

And the difference was, when you have people who come from the corporate defense world, like Holder, like Lanny Breuer, they tend to approach these settlements not to get a pound of flesh out of the wrongdoers, but instead they want to emerge with a settlement that leaves everybody happy when they walk out of the room. But that’s really not a good approach to fighting crime. That’s not the kind of attitude you want in your top crime fighter in the country. And as a result, that’s how we got so many of these settlements, which, again, were concluded in secret, in the back room. And people like Jamie Dimon were walking out of these settlements, saying, “Well, this wasn’t so bad.” And their share price would go up the day after these settlements were concluded. That’s really not what we want from the top cop in the country.