“Beauty is only skin deep, but ugly goes clean to the bone.”

“I hate writing, I love having written.”

“By the time you swear you’re his,
Shivering and sighing,
And he vows his passion is
Infinite, undying –
Lady, make a note of this:
One of you is lying.”

Her formal education ended at 14, but she became a celebrated wit. Parker was a founding member of the famed Algonquin Round Table (circa 1919-1929), a group of New York writers who lunched at the Algonquin Hotel. Regulars in the “Vicious Circle” included Robert Benchley, Alexander Woollcott, George S Kaufman, and Edna Ferber.

When the New Yorker debuted in 1925, Dorothy Parker was on the editorial board. As the magazine’s “Constant Reader,” she contributed poetry, fiction — and book reviews which pulled no punches:

On the use of “hummy” for “honey” by A.A. Milne: “It is that word ‘hummy,’ my darlings, that marks the first place in The House at Pooh Corner at which Tonstant Weader Fwowed up.”

“This is not a novel to be tossed aside lightly. It should be thrown with great force.”

Parker became a socialist in 1927 during the Sacco and Vanzetti trial. She was called before the House on Un-American Activities in 1955, and pleaded the Fifth Amendment.

A dream lies dead here. May you softly go
Before this place, and turn away your eyes,
Nor seek to know the look of that which dies
Importuning Life for life. Walk not in woe,
But, for a little, let your step be slow.
And, of your mercy, be not sweetly wise
With words of hope and Spring and tenderer skies.
A dream lies dead; and this all mourners know:

Whenever one drifted petal leaves the tree-
Though white of bloom as it had been before
And proudly waitful of fecundity-
One little loveliness can be no more;
And so must Beauty bow her imperfect head
Because a dream has joined the wistful dead!

Her first marriage ended in divorce. She and her second husband, Alan Campbell, worked together as screenwriters for MGM and Paramount. They were nominated for an Academy Award for A Star Is Born in 1937. They divorced in 1947, but remarried in 1950. He died of an overdose in 1963.

Razors pain you;
Rivers are damp;
Acids stain you;
And drugs cause cramp.
Guns aren’t lawful;
Nooses give;
Gas smells awful;
You might as well live

When she turned 70, she told an interviewer who asked what she was going to do next, “If I had any decency, I’d be dead. All my friends are.”

She was asked once to compose her epitaph. She wrote: “Excuse My Dust.”

On June 6, 1967, in New York City, Parker was found dead of a heart attack at age 73. She bequeathed her literary estate to Dr. Martin Luther King, Jr. She had never met him.

But that’s not the end of the story.

Parker named Lillian Hellman as executor of her will. Hellman made all the funeral arrangements, but never told the crematory what to do with the ashes. After six years,  they were mailed to the office of Parker’s attorney, Paul O’Dwyer. The little box of ashes moved around his office for 15 years, ending up in a filing cabinet.

The friends I made have slipped and strayed,
And who’s the one that cares?
A trifling lot and best forgot-
And that’s my tale, and theirs.

Then if my friendships break and bend,
There’s little need to cry
The while I know that every foe
Is faithful till I die.

When Dr. King was assassinated in 1968, the estate had passed to the NAACP. Lillian Hellman went to court to fight them over Parker’s literary estate. She was adamant that the will was supposed to give her a huge sum. Hellman claimed that Dorothy Parker “must have been drunk when she did it.” In 1972, she lost when a judge ruled that she should be removed from executorship.

In 1988, someone figured out that Dorothy Parker’s ashes were still unclaimed, 21 years after her death. New York tabloids ran headlines.

The NAACP claimed them, and built a memorial garden at their national headquarters in Baltimore. Dorothy Parker’s ashes were finally interred there on Oct. 20, 1988. The circular brick memorial is meant to recall the Round Table. On the top of her urn the inscription reads:

Here lie the ashes of Dorothy Parker (1893-1967) Humorist, writer, critic, defender of human and civil rights. For her epitaph she suggested “Excuse My Dust”. This memorial garden is dedicated to her noble spirit which celebrated the oneness of humankind, and to the bonds of everlasting friendship between black and Jewish people.

I think this would have been my choice: 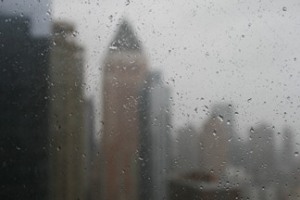 There are many who hide their pain behind humor, but she held hers up for all to see, then made us laugh with her.

However, Dorothy Parker should always have the last word: “There’s a hell of a distance between wise-cracking and wit. Wit has truth in it; wise-cracking is simply calisthenics with words.”

Nona Blyth Cloud has lived and worked in the Los Angeles area for the past 50 years, spending much of that time commuting on the 405 Freeway. After Hollywood failed to appreciate her genius for acting and directing, she began a second career managing non-profits, from which she has retired. Nona has now resumed writing whatever comes into her head, instead of reports and pleas for funding. She lives in a small house overrun by books with her wonderful husband.
View all posts by wordcloud9 →
This entry was posted in Estate Law, Humor, Literature, Movies, Poetry, Word Cloud and tagged Algonquin Round Table, Dorothy Parker, Lillian Hellman, Martin Luther King Jr, NAACP, Sardonic, The New Yorker. Bookmark the permalink.