Each poem comes in its own way. Finding the rhythm and shape of a poem can be as natural as breathing, or as difficult as giving birth.

Some poems emerge full-grown like Athena from the head of Zeus, while others take endless re-writing – snipping here, hacking there, until at last like a Bonsai master, you’ve eliminated everything that isn’t poem.

Poets are also relentless hunters, tracking the elusive word. Trying this word, then another, going ever deeper into the thicket, seeking the one word that will make the poem whole.

Kihachi Ozaki (1892 – 1974) knew these tests of a poet’s will and craft. Even with the difficulty of translation from Japanese into English, his thoughts come to us in sharp focus.

I have to select a word for material.
It should be talked about in the smallest possible amount and have a deep suggestiveness like nature,
bloom from inside its own self,
and at the edge of the fate encircling me
it will have to become darkly and sweetly ripened.

Of a hundred experiences it always
has to be the sum total of only one.
One drop of water dew
becomes the harvest of all dewdrops,
a dark evening’s one red point of light
is the night of the whole world.

And after that my poem
like a substance entirely fresh,
released far away from my memory,
the same as a scythe in a field in the morning,
the same as the ice on a lake in spring,
will suddenly begin to sing from its own recollection.

Kihachi Ozaki, standing next to chair,
at 10-yr anniversary of Shirakaba journal

In Japanese, Ozaki, the family name, would come first, so in some sources he is listed as Ozaki Kihachi.

Kihachi Ozaki attended the Keika Shogyo School, where he studied English, and began writing poetry. In 1911, he met poet and sculptor Takamura Kōtarō, who encouraged his fledgling literary efforts.

As a young writer, Ozaki joined the Shirakaba-ha (白樺派?, literally “White Birch Society”) which was an influential Japanese artistic coterie that published the literary magazine Shirakaba, from 1910 to 1923 (publication was discontinued after the 1923 Great Kanto Earthquake.)

Shirakaba-ha began as a literary society, but expanded to include artists from other disciplines. Members rejected Confucianism and the strictures of traditional Japanese literary and artistic styles, and brought more attention in Japan to Western literature and art. Shirakaba-ha had some parallels with the Arts and Crafts movements in Europe and America, including an interest in Japanese folk art, long disparaged by traditional art critics.

The “Shōwa literature” era in Japanese letters lasted from the 1920s until the outbreak of World War II in 1939. During this time of great interest in Western culture among the liberal literati and artists rebelling against Japanese tradition, the fast-rising ambitious and aggressive nationalism among military, political and industrial groups led to the invasion of China in 1937.

World War II changed everything. Even the most liberal writers in Japan were swept up in wartime propaganda, the “dark ravine.” Those who refused to participate were unable to get their work published. When the war ended, the situation reversed, and many writers scrambled to hide or revise their wartime work, as a postwar Japan under U.S.influence sought to forget the war that had cost so much.

Kihachi Ozaki’s name appeared on a list of “compromised” writers.

Without translations of his writings, his later years are speculation and missing pieces.

Ozaki was a long-time member of Kiri-no-tabi-kai, “the wanderers of the mist,” a hiking group. He often wrote praises of the beauty of nature and the joys of rural life. From 1946 to 1954, he lived quietly in a cottage in the mountains of Fujimi Kōgen (Fujimi means “immortality, invulnerable.” Kōgen means “upland.”) in Nagano Prefecture.

Frequently I am impelled to stand still,

as though to authenticate the distance to an object.

That distance is being replenished,

behold, by thick whirlwinds and billions of air particles.

Yesterday I watched smoke of field fires ascend from

several places of this plateau,

today listen to faint birds in a forest of fallen leaves.

For ten days I have not heard news of the city,

undulations of fields and mountains where clouds gather and

– from Kihachi Ozaki’s poem Being

Beginning in 1966, Ozaki lived in Kamakura in Kanagawa Prefecture. He died there in 1974. His grave is at Meigetsu-in, the Hydrangea Temple: 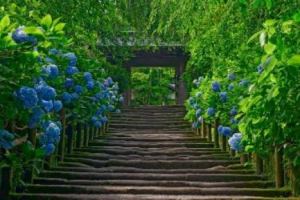 Thank you for reading this week’s Word Cloud.

Books by Kihachi Ozaki – out-of-print or not available in translation as far as I could discover:

Sora to Jumoku (“Sky and Trees”)

Tabi to taizai  (“Journeys and sojourns”)

Nona Blyth Cloud has lived and worked in the Los Angeles area for the past 50 years, spending much of that time commuting on the 405 Freeway. After Hollywood failed to appreciate her genius for acting and directing, she began a second career managing non-profits, from which she has retired. Nona has now resumed writing whatever comes into her head, instead of reports and pleas for funding. She lives in a small house overrun by books with her wonderful husband.
View all posts by wordcloud9 →
This entry was posted in Art, History, Japan, Poetry, Word Cloud, World War II and tagged Basho, Free Verse, Obscured, Ozaki Kihachi, Showa, Translations. Bookmark the permalink.
%d bloggers like this: