This month marks the 99th Anniversary of the end of the Somme Offensive, also known as the Battle of the Somme. The Somme was one of the longest, bloodiest battles in human history: between July 1, and November 18, 1916, over one million soldiers were wounded or killed.

The combined French and British forces gained a total of 6 miles in forward movement from this carnage.

Siegfried Sassoon was born into a well-to-do Anglo-Jewish family. Before the war, he spent much of his time fox hunting, playing cricket and writing imitative poetry.

He served in World War I with the Royal Welch Fusiliers. The death of his brother at Gallipoli in late 1915 pushed him to go on dangerous night reconnaissance in No Man’s Land. His men began calling him “Mad Jack.”

The day before the Somme Offensive began, Sassoon received a Military Cross for bringing back a wounded soldier during heavy fire. While his unit was waiting in reserve before moving to the front, Sassoon contracted Trench fever, an infectious disease transmitted by body lice.

A sympathetic doctor arranged for him to be sent home to recover, so he missed the Somme. When pronounced fit for duty, he returned to his unit.

The war dragged on, and the death toll continued to mount. While recovering from a sniper bullet wound, Sassoon wrote an open letter of protest to the war department, which was published in The Times newspaper, July 31, 1917:

“I am making this statement as an act of wilful defiance of military authority, because I believe the war is being deliberately prolonged by those who have the power to end it.

I am a soldier, convinced that I am acting on behalf of soldiers. I believe that this war, upon which I entered as a war of defence and liberation has now become a war of aggression and conquest. I believe that the purposes for which I and my fellow soldiers entered upon this war should have been so clearly stated as to have made it impossible to change them, and that, had this been done, the objects which actuated us would now be attainable by negotiation.

I have seen and endured the suffering of the troops, and I can no longer be a party to prolong these sufferings for ends which I believe to be evil and unjust. I am not protesting against the conduct of the war, but against the political errors and insincerity’s for which the fighting men are being sacrificed.

On behalf of those who are suffering now I make this protest against the deception which is being practised on them; also I believe that I may help to destroy the callous complacence with which the majority of those at home regard the continuance of agonies which they do not share, and which they have not sufficient imagination to realise.” 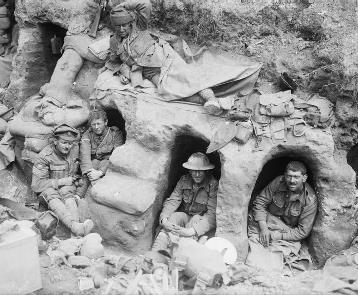 At the urging of Bertrand Russell, the letter was read in the House of Commons. Sassoon expected to be court-martialed for his protest, but author Robert Graves intervened on his behalf, arguing that Sassoon was suffering from shell-shock and needed medical treatment. Sassoon was hospitalized at Craiglockhart War Hospital in Scotland, where he met poet Wilfred Owen and encouraged him to continue writing.

Siegfried Sassoon is best remembered for some 100 poems written about the horrors of WWI, most composed during the times he was in hospital. Public reaction to Sassoon’s poetry was fierce. Some complained about his lack of patriotism, others that his all-too-realistic depiction of war was too “extreme.” But British readers bought his poetry because it captured the reality of trench warfare and the weariness of British soldiers in a never-ending war that ultimately settled very little.

He drowsed and was aware of silence heaped
Round him, unshaken as the steadfast walls;
Aqueous like floating rays of amber light,
Soaring and quivering in the wings of sleep.
Silence and safety; and his mortal shore
Lipped by the inward, moonless waves of death.

Someone was holding water to his mouth.
He swallowed, unresisting; moaned and dropped
Through crimson gloom to darkness; and forgot
The opiate throb and ache that was his wound.
Water—calm, sliding green above the weir;
Water—a sky-lit alley for his boat,
Bird-voiced, and bordered with reflected flowers
And shaken hues of summer: drifting down,
He dipped contented oars, and sighed, and slept.

Night, with a gust of wind, was in the ward,
Blowing the curtain to a gummering curve.
Night. He was blind; he could not see the stars
Glinting among the wraiths of wandering cloud;
Queer blots of colour, purple, scarlet, green,
Flickered and faded in his drowning eyes.

Rain—he could hear it rustling through the dark;
Fragrance and passionless music woven as one;
Warm rain on drooping roses; pattering showers
That soak the woods; not the harsh rain that sweeps
Behind the thunder, but a trickling peace,
Gently and slowly washing life away.

He stirred, shifting his body; then the pain
Leaped like a prowling beast, and gripped and tore
His groping dreams with grinding claws and fangs.
But someone was beside him; soon he lay
Shuddering because that evil thing had passed.
And death, who’d stepped toward him, paused and stared.

Light many lamps and gather round his bed.
Lend him your eyes, warm blood, and will to live.
Speak to him; rouse him; you may save him yet.
He’s young; he hated war; how should he die
When cruel old campaigners win safe through?

But death replied: “I choose him.” So he went,
And there was silence in the summer night;
Silence and safety; and the veils of sleep.
Then, far away, the thudding of the guns.

Have you forgotten yet?…
For the world’s events have rumbled on since those gagged days,
Like traffic checked while at the crossing of city-ways:
And the haunted gap in your mind has filled with thoughts that flow
Like clouds in the lit heaven of life; and you’re a man reprieved to go,
Taking your peaceful share of Time, with joy to spare.
But the past is just the same–and War’s a bloody game…
Have you forgotten yet?…
Look down, and swear by the slain of the War that you’ll never forget.

Do you remember the dark months you held the sector at Mametz–
The nights you watched and wired and dug and piled sandbags on parapets?
Do you remember the rats; and the stench
Of corpses rotting in front of the front-line trench–
And dawn coming, dirty-white, and chill with a hopeless rain?
Do you ever stop and ask, ‘Is it all going to happen again?’

Do you remember that hour of din before the attack–
And the anger, the blind compassion that seized and shook you then
As you peered at the doomed and haggard faces of your men?
Do you remember the stretcher-cases lurching back
With dying eyes and lolling heads–those ashen-grey
Masks of the lads who once were keen and kind and gay?

Have you forgotten yet?…
Look up, and swear by the green of the spring that you’ll never forget. 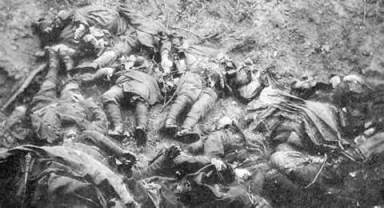 Sassoon’s demand still echoes as our 21st Century wars continue in far-off lands with no victories and no end in sight.

For the story of the first day of the Battle, please see the 2016 Joy of Fishes post:

The Death Bed from The Old Huntsman and Other Poems (1917)
http://www.poetryfoundation.org/poem/248212

The death of Wilfred Owen
http://www.history.com/this-day-in-history/poet-wilfred-owen-killed-in-action

Nona Blyth Cloud has lived and worked in the Los Angeles area for the past 50 years, spending much of that time commuting on the 405 Freeway. After Hollywood failed to appreciate her genius for acting and directing, she began a second career managing non-profits, from which she has retired. Nona has now resumed writing whatever comes into her head, instead of reports and pleas for funding. She lives in a small house overrun by books with her wonderful husband.
View all posts by wordcloud9 →
This entry was posted in Heroism, History, Poetry, Word Cloud, World War I and tagged Battle of the Somme, Bertrand Russell, Robert Graves, Siegfried Sassoon, Somme Offensive, Trench fever, Warcry, Wilfred Owen. Bookmark the permalink.