While Shakespeare (1564-1616) is best remembered  for his plays, his sonnets are what first brought him fame. There’s been much speculation about just who inspired them. Most are addressed to a fair young man, who was probably Henry Wriothesley, 3rd Earl of Southampton and Shakespeare’s patron, which has caused much speculation about Shakespeare’s sexual orientation, but the later sonnets feature a ‘dark lady’— there’s been a frenzy of guesswork about this lady, even contributing to the never-ending debate about Shakespeare’s ‘true’ identity. Unless a hitherto unknown diary or a cache of letters addressed by name to his beloved show up, we’ll never know.

But we can rejoice in these works by the greatest writer in the English language, and that is more than enough for me. Here are three of his springtime sonnets.

He’s lamenting a long separation from his beloved, and feels that the joys of spring and summer have passed him by, their flowers but pale imitations of his beloved, while he was feeling as if it were still winter:

From you have I been absent in the spring,
When proud pied April, dressed in all his trim,
Hath put a spirit of youth in every thing,
That heavy Saturn laughed and leapt with him.
Yet nor the lays of birds, nor the sweet smell
Of different flowers in odour and in hue,
Could make me any summer’s story tell,
Or from their proud lap pluck them where they grew:
Nor did I wonder at the lily’s white,
Nor praise the deep vermilion in the rose;
They were but sweet, but figures of delight,
Drawn after you, you pattern of all those.
Yet seemed it winter still, and you away,
As with your shadow I with these did play.

In this sonnet, he declares that he will not overpraise her outer beauty like other poets, but will speak truly about  his love for her, even if it shines less brightly than the stars, or the overblown phrases of others — he’s not trying to sell her anything, but just tell her how he really feels.

So is it not with me as with that Muse,
Stirred by a painted beauty to his verse,
Who heaven itself for ornament doth use
And every fair with his fair doth rehearse,
Making a couplement of proud compare
With sun and moon, with earth and sea’s rich gems,
With April’s first-born flowers, and all things rare,
That heaven’s air in this huge rondure hems.
O! let me, true in love, but truly write,
And then believe me, my love is as fair
As any mother’s child, though not so bright
As those gold candles fixed in heaven’s air:
Let them say more that like of hearsay well;
I will not praise that purpose not to sell.

By contrast, in this sonnet, one of his  loveliest, he finds his muse’s beauty the same as it was when they first met, three years before, but admits that time changes all of us, and his eyes may have missed the changes. Then he tells future generations that, ages before they were born, his beloved was long dead, and they have missed seeing such beauty at its height.

To me, fair friend, you never can be old,
For as you were when first your eye I ey’d,
Such seems your beauty still. Three winters cold,
Have from the forests shook three summers’ pride,
Three beauteous springs to yellow autumn turned,
In process of the seasons have I seen,
Three April perfumes in three hot Junes burned,
Since first I saw you fresh, which yet are green.
Ah! yet doth beauty like a dial-hand,
Steal from his figure, and no pace perceived;
So your sweet hue, which methinks still doth stand,
Hath motion, and mine eye may be deceived:
For fear of which, hear this thou age unbred:
Ere you were born was beauty’s summer dead.

I am a firm believer that William Shakespeare is truly the author of the plays and sonnets attributed to him. The other supposed authors haven’t shown in the writing which is known for certain to be theirs the genius which is so clear in Shakespeare’s work, and two of them* were dead years before several major Shakespeare plays appeared, so it seems particularly foolish to look for some other author just because they were born to a higher rank or had more formal education. It’s pure snobbery to think that a person from a family in modest circumstances couldn’t be the greatest master of the English tongue. Far better to enjoy the astounding treasures which he has left us. 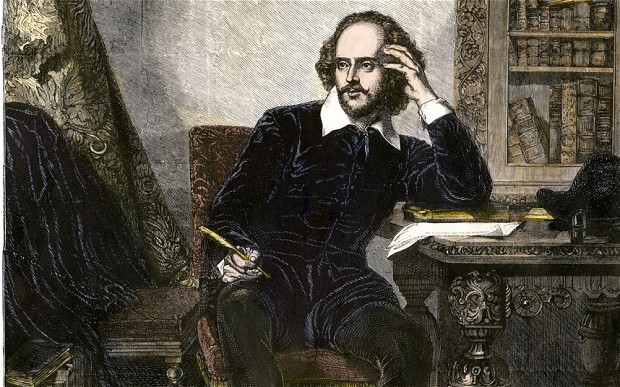 Even Shakespeare went through some hard times, and fell out of fashion, but was kept from despair by remembering that he was loved, and that love was such a treasure he wouldn’t have traded places, even with kings.

When in disgrace with fortune and men’s eyes
I all alone beweep my outcast state,
And trouble deaf heaven with my bootless cries, 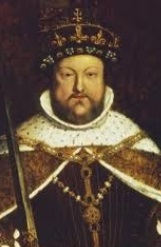 And look upon myself, and curse my fate,
Wishing me like to one more rich in hope,
Featured like him, like him with friends possessed,
Desiring this man’s art, and that man’s scope,
With what I most enjoy contented least;
Yet in these thoughts my self almost despising,
Haply I think on thee, and then my state,
Like to the lark at break of day arising
From sullen earth, sings hymns at heaven’s gate;
For thy sweet love remembered such wealth brings
That then I scorn to change my state with kings.

* Christopher Marlowe, whose style and talent was closest to Shakespeare’s, was killed in 1593, and Edward de Vere, 17th Earl of Oxford, died in 1604, but Shakespeare didn’t retire from the theatre until 1611. The first performances of King Lear, Macbeth, Anthony and Cleopatra, and The Tempest, among several other of his plays, were all after 1604.

Nona Blyth Cloud has lived and worked in the Los Angeles area for the past 50 years, spending much of that time commuting on the 405 Freeway. After Hollywood failed to appreciate her genius for acting and directing, she began a second career managing non-profits, from which she has retired. Nona has now resumed writing whatever comes into her head, instead of reports and pleas for funding. She lives in a small house overrun by books with her wonderful husband.
View all posts by wordcloud9 →
This entry was posted in Art, England, Poetry, Spring, Word Cloud and tagged Bard of Avon, Delight, Hans Holbein the younger, Love, National Poetry Month, Sonnets, William Shakespeare. Bookmark the permalink.
Loading Comments...
%d bloggers like this: