In 1985, the state of Maine recognized the obvious and outstanding choice for its Official State Cat: the Maine Coon Cat.

This state seems to love all kinds of cats: more than 46% of Maine households have cats.

Maine Coon Cats are the only breed developed in the United States, from a mixture of natural North American cats and long-haired foreign breeds. Their name probably comes from their big bushy tails, which are often ringed, and can be as long as 14 inches!

These cats are tall, muscular, and big-boned. Their long thick water-resistant triple coats, long bushy tails, heavily furred ears, and big round tufted feet are perfect for Maine’s harsh winters. They weigh between 10 and 25 pounds. It takes between 3 to 5 years for Maine Coons to reach their full size.

Maine Coon Cats have above average intelligence. They are affectionate with their families, but very independent, and cautious around strangers. They have large eyes and ears, which are often topped by black tufts, and they can be chatterboxes – they make a distinctive chirping trill, in addition to more typical cat noises, but they are much softer-voiced than that more famous feline talker, the Siamese. 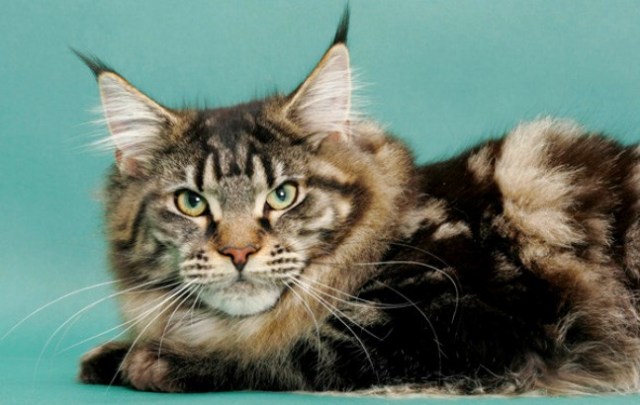 Most Maine Coon Cat breeders believe they are a mix of native domestic shorthairs and foreign longhairs – either Angora types introduced by New England seamen, or even longhairs brought  by Norsemen. But there’s a legend that the original Angoras belonged to Marie Antoinette – they supposedly made it aboard her escape ship and came to America, while she wound up going to the guillotine!

There are more U.S. states that have Official State Dogs, but now 4 states have State Cats, and in 1982 Florida named the Florida Panther as an Official State Mammal to help protect this endangered Big Cat.

Nona Blyth Cloud has lived and worked in the Los Angeles area for the past 50 years, spending much of that time commuting on the 405 Freeway. After Hollywood failed to appreciate her genius for acting and directing, she began a second career managing non-profits, from which she has retired. Nona has now resumed writing whatever comes into her head, instead of reports and pleas for funding. She lives in a small house overrun by books with her wonderful husband.
View all posts by wordcloud9 →
This entry was posted in Cats, Maine and tagged Maine Coon Cats, Official U.S. State Cats. Bookmark the permalink.