Man and Bird: A Sweet Relationship

Mutualism: two organisms of different species in a relationship where each individual benefits from the activity of the other. 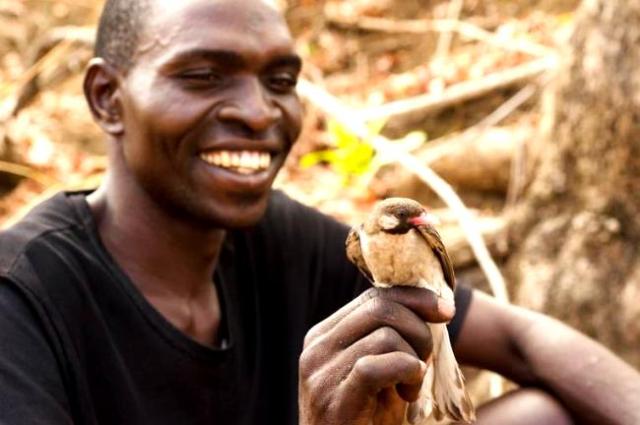 Honeyguides in northern Mozambique know when a Yao hunter makes a special trilling sound, he wants to find a bees’ nest — and its delectable honey. They will often lead humans to a nest in exchange for some honeycomb.

A honeyguide flies from tree to tree, calling and leading the person on, until the team reaches a bee nest. The person’s more risky job is to extract the honey from the nest.

The partnership comes from complementary skills and deficits. Honeyguides excel at locating bees’ nests, but a bird that tries to steal some of the tasty reward could easily be stung to death. Humans have the skills and tools to dismantle the nests, and are less vulnerable to the bees’ stings, but compared to the honeyguides aren’t very good at finding the nests.

Scientists are studying honeyguides to understand this communication between humans and an animal that is not domesticated. Communication between domesticated species and people is well known, but “the fascinating point in the case of the honeyguide is that it describes such a relationship between a wild animal and humans,” says behavioral biologist Claudia Wascherof Anglia Ruskin University in Great Britain, who was not involved with the new research, “This has not been described scientifically before.”

Though the science may be new, the relationship isn’t: Honeyguides and people have been cooperating in Africa for thousands of years.

Nona Blyth Cloud has lived and worked in the Los Angeles area for the past 50 years, spending much of that time commuting on the 405 Freeway. After Hollywood failed to appreciate her genius for acting and directing, she began a second career managing non-profits, from which she has retired. Nona has now resumed writing whatever comes into her head, instead of reports and pleas for funding. She lives in a small house overrun by books with her wonderful husband.
View all posts by wordcloud9 →
This entry was posted in Biology and tagged Africa, African Honeyguide, Bees, birds, Honey, Mozamboque, Mutualism, Yao Hunters. Bookmark the permalink.
Loading Comments...
Comment
×
%d bloggers like this: