Structural substitution and the logic of urban modernism

Here are some examples of cultural substitution in the built environment that articulate multiple meanings and identify an axis or axes of more than geodetic importance.

Every historical site is both monumental and documentary and connected by a visible, invisible and visual logic appropriate to the accumulated cultural production and reproduction in and on those sited places. Their axes are found in the historical logic of spaces as one interprets both a structural replacement/displacement and a substitution/transference of modern power.

Every place has not only its sense, but its agency and structure, constructed and deconstructed by its history. The urban history of the built environment, rather than valorizing and commodifying aesthetic attributes, might be better served by studying the transfers of development rights and the formation of historical space in the cycles of construction, demolition, and creation of open/closed spaces on the same geodetic sites.

“In social terms, a bourgeois space and cosmopolitan society has a new layer of urban order and meaning imposed – with a nationalist ideology and modern state-building – that is not only visual and symbolic, but also real and instrumental.”

Whether facadism or roof-ism,  it is what all occupation movements try to do, as the sublimated mode of production becomes historically sedimented and occasionally excavated. It is a data base with an information superstructure, layered onto the intertextual determinacies of urban plans. The first example buries the sign, the second projects the sign by projecting a plan, the third substitutes the sign because location, location, location(sic). Place remains yet disappears, only to reappear in new, more virtual forms.

There is always sedimented meaning in every urban site:  example one has cold war surveillance built on WWII rubble; example two has the logic of the modern capitalist state imposed on colonized histories; and example three replaces one stage of commercialized colonialism with the structures of modern governmentality.

The ruins of the NSA Cold War listening post set atop an artificial mountain built on the rubble of WW2 covered one of the Reich’s buildings, the Military-Technical university in Berlin.

Example Two: Shanghai and Nanjing, China – The unbuilt capitals of Modern (interwar) China one commercial and the other governmental, but both built using European modern plan-logic and yet kept the feng shui orientation to North and relocated themselves as planned, modern new capitals away from the historical old cities like Washington DC, Brasília , Chandigarh, Canberra, (soon Cairo — built by China) etc.

Example Three: Singapore — a modern city-state with minimal land area that carries a similar logic to the above examples by replacing the place of the commercial colonizer with the governmental seats of national and civic administrative power.

Ruin of rubble
The mound Teufelsberg is 120.1 meters high, the highest place in Berlin. Built on the remains of 2nd World War bombed-out Berlin. All the rubble that couldn’t be used for the city’s reconstruction were run out here in the suburbs, where they initially covered the remains of what should have been the University of the World Capital, Germania’s Department of War Technology.

The Nazis worked on their project in Grunewald from 1937 until 1942 but they never finished. And now, on the remains of Hitler’s and his architect Albert Speer’s megalomaniac visions, the abandoned towers of the Cold War’s victorious power – as a history’s ironic comment – resides.

JANUARY 24, 2013 From Nationalism to Nation-Building: A Comparative Perspective on the Modern Encounter in Beijing and Nanjing By Wonbin Sohn

Following the historic opening of China to the Western world, and the turn of the twentieth century, foreign architectural and planning influences started to appear in Chinese urban landscapes, mostly imported directly from the West.

As in Shanghai, a prototype of cosmopolitan modern cityscape in China, foreign architectural firms, such as Palmer and Turner, Spense Robinson and Partners, and Atkinson and Dallas, made an appearance. Since the signing of the Nanjing Treaty, Shanghai had been the most open and lucrative economic entity in China during the period, and the city has consistently encapsulated foreign influences and progressive modernism, as the formation of the politically autonomous areas (i.e. the international concession and the French concession) and the forest of Neo-Classicist and Art Deco architecture epitomizes.

Besides the direct foreign presence in architectural employments, by the early twentieth century, Western-educated Chinese architects had returned to the motherland, and joined the projects for modern institutions and new commercial enterprises…

Most of the  Corresponding to the return of Chinese architects (so-called China’s First Generation of modern architects, including Zhuang Jun, Liang Sicheng and Dong Dayou), foreign engineers in China had already experimented with incorporating Chinese architectural features into their designs… and during the 1920s, there arose the ‘Chinese Form’ movement (中國固有形式 zhōngguó gùyǒu xíngshì), which was characterized by the use of a Chinese roof on a steel and concrete structure, and the use of traditional decorative motifs and sometimes of traditional spatial organization.

According to Jianfei Zhu, this was an attempt to restore traditional cultural values and Confucian learning in modern Chinese architecture, and this practice was further promoted by the republican government in the Shanghai and Nanjing planning proposals in 1929. For instance, the Mayor’s Building in Greater Shanghai Civic Center, which was designed during the 1930s, had neoclassical proportions and adhered to the Western compositional principle, while employing decorative elements from the palace and temples of ancient China in its façade and interior spaces.
At the most superficial level, the primary issue, which confronted the nationalist officials was that of constructing a bound polity drawn together by a set of grand symbols, shared cultural legacies and moral consciousness of political unity. As a result, the architects of Nanjing attempted to promulgate a set of horizontally universal values via their building designs, which could effectively replace the hierarchically stratified values of a previous cultural order under the Qing Dynasty.

Republican China saw the popularization of the term “monumental”(紀念 jìniàn) within the public domain, including its use in such phrases as

and for example, when inviting public participation of architectural designs of the city, the government stipulated competition guidelines, such as a requirement to have “classical Chinese style with distinctive and monumental features (獨特而有具有紀念性意義的 中國古典形式).”

Thus, through emphasizing “monumental features” of its cityscape, the nationalist government promoted both visual monumentality and the profound psychological memories of Nanjing, associated with modern political sovereignty.  In addition, with the influence of the City Beautiful Movement that emphasized the creation of large-scale public spaces and elaborate public buildings along wide parkways, the architects of Nanjing attempted to benchmark the layouts of other capital cities in the world, mostly those of Washington D.C. and Paris. Therefore, the planners envisioned the new capital with wide boulevards, malls and parks, resembling the National Mall of Washington D.C. In short, Nanjing’s main streets and districts were an extravaganza of Chinese cultural consolidation and nationalist displays.

…the urban landscape of Nanjing was an amalgamation of Chinese-style architecture upon modern configuration. The capital plan of 1929 displays a civil construction of a modern city with a set of commercial buildings and private industries as well as the KMT’s government and municipal complexes. The forms of government offices and public buildings were required to adopt a Chinese architectural design, with the prolonged tradition of pre-modern imperial palaces included, while the city layout adopted a Beaux-Arts composition of diagonals in a grid of orthogonal lines. In addition, the distinctiveness of a large and open space, specifically aimed at holding a large-scale public gathering, should be noted.
The Capital Plan of 1929 advocated a combination of “principles of European-American science and technology” with the artistic tradition of China. Influenced by the early-generation of Chinese architects, who were trained either in Western Europe or in the United States, and with the presence of Western architects in China (i.e. Henry K. Murphy and Ernest Goodrich), Nanjing’s urban landscape was a hybrid of the imperial architectural tradition from pre-modern Chinese dynasties, with European Beaux-Arts and neo-classical compositions. Therefore, Nanjing’s architecture and urban planning were an active “reinterpretation” of Chinese culture in a modern, republican setting: diverse constructive elements were alloyed to promote a hybrid synthesis of Western science and technology with Chinese culture and values, thus demonstrating a progressive and modern ideological politics of the nationalist regime. 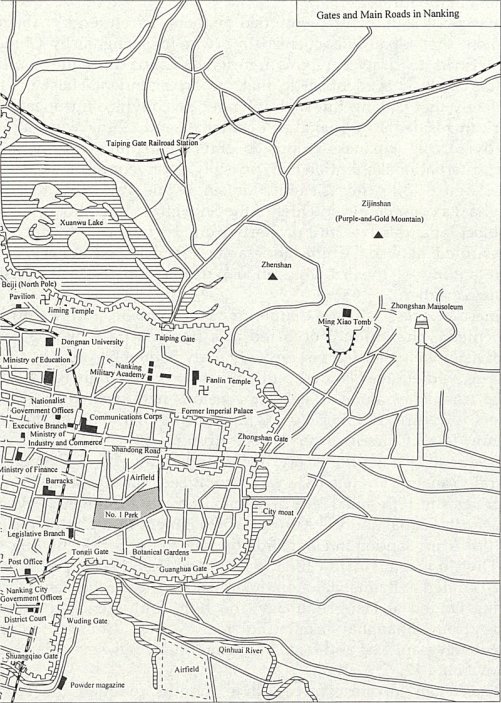 The story is not only about the plan, but the logic of colonialism and its governance.

Controlling axis from the Padang on HIgh Street to Hill Street, in front of the old jail, past that intersection up to the Fort Canning hill and its segregated cemetery. On this axis are the major institutions, the cricket club, the police station, and the supreme court building that replaces on the same site, the European Hotel where Joseph Conrad, Ernest Hemingway, and W. Somerset Maugham stayed and wrote. These are the loci of governmentality for colonial power over the colonial body.

The High Street to Hill Street

In November 1822, Sir Stamford Raffles wrote to the Town Committee, directing attention to the ‘proper allotment of the Native divisions of the town, and the first in importance of these is beyond doubt the Chinese’. ‘From the number of Chinese already settled, and the peculiar attractions of the place for that industrious race, it may be presumed that they will always form by far the largest portion of the community. The whole therefore of that part of the town to the south west of the Singapore River is intended to be appropriated for their accommodation’.

The arrow points to the general area discussed below, the Padang, from the foot of High street up to Fort Canning

The picture shows the Hotel de l’Europe on the left and the Singapore Cricket Club on the right, with the Padang sandwiched between the two buildings. Taken in the 1920s, the picture shows 4 horse-drawn carriages on the left, next to the hotel. Joshua Chia explained that “the hotel was a popular retreat for the rich and wealthy due its strategic location and fine cuisine.” (Chia, 2006)

Given the sophisticated clients the hotel was meant to cater to, the architecture of the building was carefully chosen. “Constructed in the Renaissance style, the hotel’s ground floor façade consisted of a series of segmental arches between massive rusticated piers, ” as explained by Joshua Chia, “Another distinctive feature of the hotel’s architecture was its Corinthian columns.”…

In addition, located at the junction of Hill Street and the Esplanade” (The Straits Times, 1904), “the hotel’s strategic location made it a popular place for the European community (Chia, 2006).”

Now monumentality and governmentality get contested in the context of mediated information that circulates nearly exclusively and is reproduced while detached from physical places.

On 4 June 2013, Sina Weibo, China’s most popular microblog, blocked terms whose English translations are “today”, “tonight”, “June 4“, and “big yellow duck”. If these were searched for, a message appeared stating that, in accordance with relevant laws, statutes and policies, the results of the search could not be shown.

The censorship occurred because a photoshopped version of Tank Man, in which rubber ducks replaced the tanks, had been circulating around Twitter[35] — a reference to Florentijn Hofman‘s Rubber Duck sculpture, which at that time was floating in Hong Kong’s Victoria Harbour.[36]

1 Response to Structural substitution and the logic of urban modernism