THC: Burning Down the Libraries

Memory — that elusive connection to the past that most animals have in their muscles, their senses, and their emotions, but not as a film stored in their head.

That film in our heads is the blessing and curse of humanity. Our peculiar connection to what we call ‘history’ has been a notable characteristic of our species, often not complete or exact, but in full color, stereophonic sound and smell-o-vision.

Yet it’s been going out of fashion in big ways and small, and that to me is cause for concern. The last few years, my husband was been required to attend ‘team building’ and ‘idea sharing’ workshops at the non-profit where he works. Team building and idea sharing are worthy goals, but the actual workshops use them as buzz words, while they pursue other agendas.

Most of the employees are under 40 something, and the concepts of “context” and “corporate memory” have no relevance to them — all employees over 50ish are regarded as out-of- touch, too old to have anything valuable to contribute.

The irony is that the “cutting edge” ideas the younger generation have are not new at all — they are spending a lot of time re-inventing wheels that have already been rolling, sometimes for more than a generation before their arrival.

This is not isolated — I went through it in my work before retirement, and we hear of it from friends across the country.

Too many people with years of experience, and their employer’s history of successes and failures stored in their memories, are laid off, or fired, with no transition. Suddenly after they’re gone, some staffer realizes that there’s nobody left who knows who to call about equipment repairs, or where items only used seasonally are stored, there’s no one who knows when, where, how or what legal documents must be filed, when the next required tests of safety equipment and elevators are due, or even that the last time the company invested in a mass mailing it was a dismal failure and why.

We are also losing the past as people are aging, victims of alzheimers and dementia, and dying. There are some isolated history projects — recording holocaust survivors, or the wartime experiences of service men and women in WWII, Korea and Vietnam. But is anyone talking to retired teachers or mechanics, to doctors or state- and local- level politicians? To union organizers or migrant workers, to veterans of the civil rights movement, garbage collectors, pioneering scientists or mathematicians? And who knows where interviews that have been collected are stored, or how to access them? 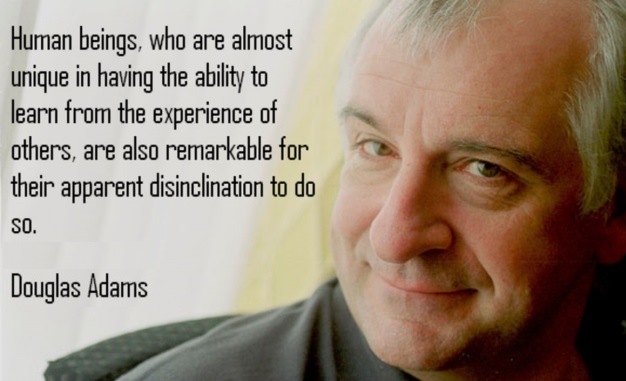 Not to mention that less and less actual history seems to be taught in our schools, and brick-and-mortar libraries and books stores are becoming rare. The Internet is approached with caution by most of my contemporaries — we know how easily inaccuracies can slip in, or things left out, because we’ve witnessed it before. I find it terrifying to talk to people who have blind faith in the accuracy of the Internet and television.

It is doubly dangerous in these perilous times, when lies are called ‘alternate facts’ and billionaire barbarians have taken over the White House and Congress.

When the ancient Library at Alexandria burned, the most concerted effort to gather all of human knowledge to that date turned to ashes. Great works of literature and drama which we know only from tantalizing fragments; medicines and cures that may or may not have worked, but might have opened new avenues of research in the present day, if only we still had them; drawings, maps, eye witness accounts, records of now-extinct languages, all gone up in smoke.

It’s far too late to save any of those, but how many modern Alexandrias are burning down now?

I realize this is an intense starter for the Monday morning after the time change, but the other topic on my mind is the Kitty Genovese murder, so it could have been worse.

Nona Blyth Cloud has lived and worked in the Los Angeles area for over 50 years, spending much of that time commuting on the 405 Freeway. After Hollywood failed to appreciate her genius for acting and directing, she began a second career managing non-profits, from which she has retired. Nona has now resumed writing whatever comes into her head, instead of reports and pleas for funding. She lives in a small house overrun by books with her wonderful husband.
View all posts by wordcloud9 →
This entry was posted in History, The Coffee Shop and tagged Burning Down the Libraries, Douglas Adams, Library at Alexandria, Lincoln Assassination, Lindy Boggs, Memory, TCS, The Way We Were. Bookmark the permalink.

13 Responses to THC: Burning Down the Libraries