Crowd hisses at Ivanka Trump in Berlin after suggesting her father is Ã¢ÂÂa tremendous champion of supporting familiesÃ¢ÂÂ https://t.co/S5zZYiS48epic.twitter.com/OzmQiuMk75

Fascinating fascism in the society of the spectacle … Much like Ivanka Trump defends her daddy as supportive of affluenza and telegenic women, Ann Coulter defends free speech because she should have her say and get paid. Ever the attention-seeker, Ann even bluffs an appearance in an historic public space after her Koch/DeVos speaker’s fee disappears.

While the left concerns itself primarily with potential street violence, the student group promoters of an Ann Coulter campus speech at UC Berkeley were trying to score obtuse RWNJ points while violence-prone groups looked for a place to  clash,

Apparently, the $20,000 speaking fees, among other funds, were coming from YAF and organized by Berkeley College Republicans, with ultimate bankrolling from the now usual suspects, the Koch Bros and the DeVos Family.

The two student groups have filed a lawsuit that would exhaust funds much like those bulk orders of books designed to improve the ratings, because that’s the Trumpian PR metric. The free speech market is also under Citizens United, an auction, but not for pro bono ideas.

The reality seems to feature incompetent negotiating with the university by the student group(s) in terms of scheduling confirmation plus some reasonable and unreasonable demands and counter-demands, including a demand that students who engage in violence be automatically expelled.

Aside from the historical absurdities comparing free speech rights from earlier eras and the inability to appreciate the desire to maintain order, Coulter and the students seem more interested in the potential confrontation and its PR flack than in any accommodation offered in terms of rescheduling.

Her antics helped forward the current state of manufactured tension that includes racial division including white nationalism and anti-immigrant xenophobia.

The speech rescheduling offer to either May 2 or some day in September were still on the table. There are also reasonable arguments that there would be for scheduling the speech on a Reading Day as an opportunity for even more students to attend, and that whether day or evening, public events are just that.

Coultergeist claimed she would go to Berkeley on Thursday 27 April and attempt to speak on Sproul Plaza, time to be determined. From Twitter, it seems that she could have had in attendance some of the same RWNJ thugs from the recent confrontations in Berkeley.

Her absence is not because of the university police’s concern about a repeat of the Milo Yiannopolos incident. She wanted to appear because it manipulates the image of “Free Speech” and reinforces stereotypes about colleges with the possibility of confrontations and violence. She won’t appear because she won’t get paid to speak about “immigration”, although she gets “press”, regardless.

She wasn’t being paid $20,000 to speak in the public space of Sproul Plaza, but rather for the offer of a rescheduled speaking engagement in a “safe” UC Berkeley venue.

Once the YAF pulled its sponsorship, presumably it pulled its money as well. Darn those speech rights funded by the Koch Brothers and the DeVos family.

The whole affair seems less about Coulter speaking on immigration than helping local agents provocateurs looking to rumble. And then there would be MSM coverage if stuff gets trashed and folks get injured. Grifters gotta grift.

Pseudo-events and alternative facts will continue as she plans to appear on Hannity’s program to claim “censorship” by UC Berkeley and also perhaps offset the continuing saga of sexual misconduct at Fox News.

Another conservative nonprofit, Young America’s Foundation, also establishes student chapters at numerous universities and sends bigoted scholars and lecturers including Ann Coulter, David Horowitz and Ted Nugent to speak at their campus events free of charge. Bankrolling these nonprofits are conservative mega-donors including Charles and David Koch and the DeVos family, who by funding the organizations enable hate speech at institutions of higher education.

The University of California, Berkeley was just slapped with a lawsuit over its mishandling of Ann Coulter’s scheduled lecture on campus.

Young America’s Foundation (YAF) and the Berkeley College Republicans (BCR) filed a suit in federal court suing the school for violating their rights to free speech, due process, and equal protection on Monday. The suit, which is available on YAF’s website, names several Berkeley administrators along with University of California President Janet Napolitano as defendants. www.washingtonexaminer.com/…

The extreme right is raising money to bus people to Berkeley this Thursday to fight. https://t.co/zlxbc5SG9H 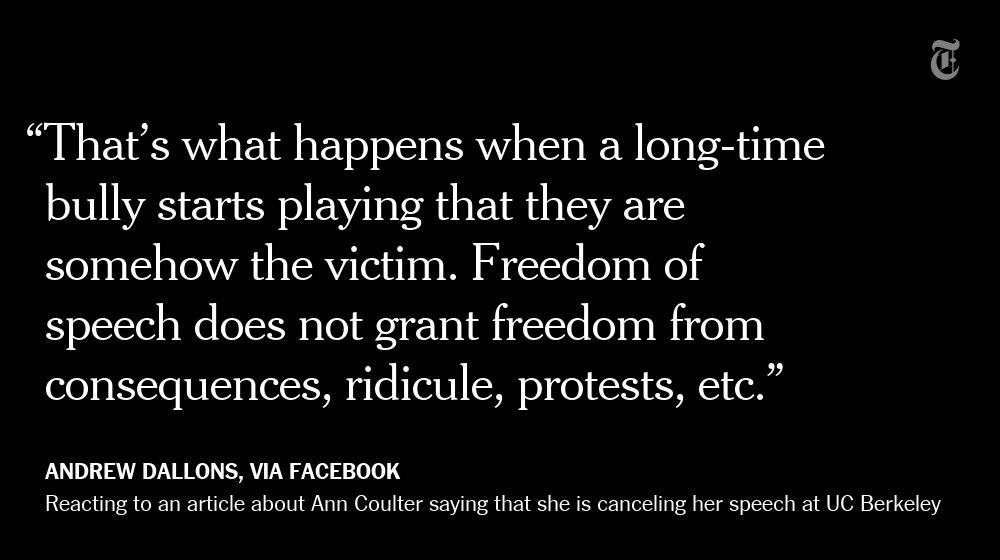 “UC Berkeley has been working to accommodate a mutually agreeable time for Ms. Coulter’s visit — which has not yet been scheduled — and remains committed to doing so. The campus seeks to ensure that all members of the Berkeley and larger community — including Ms. Coulter herself — remain safe during such an event.”

Ann Coulter: It’s “up to police to keep me safe” at UC Berkeley on Thursday https://t.co/DOEJhvNDltpic.twitter.com/wU9jYodCzp

Our letter: “how disappointed I am that counsel for UC Berkeley would misgender me” as ‘Mr.’ Dhillon…” https://t.co/zuWDDFLu2v

U of Chicago: Please “reschedule” Obama for May 2. https://t.co/bZwwNi5ctq