They shall grow not old, as we that are left grow old:
Age shall not weary them, nor the years contemn.
At the going down of the sun and in the morning
We will remember them.

– The Fallen, by Laurence Binyon 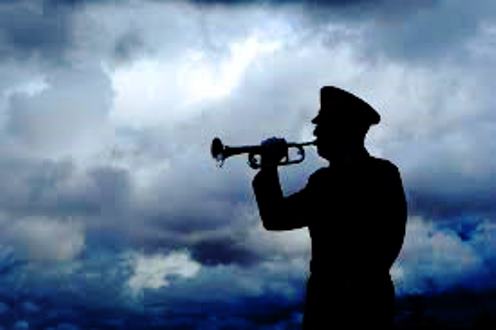 The call of the horn is an ancient tradition, especially for honoring the dead.

The Shofar, made from the horn of a ritually killed sheep or goat, dates back to the earliest days of Judaism, and is still sounded in the same way as it was in King David’s time during the High Holy Days that mark the beginning of the Jewish Year. Long wooden trumpets are blown at Rumanian funerals. Trumpets hand-carved in phallic shapes are used in funerals in the Congo. In Great Britain during the sixteenth and seventeenth centuries, black-clad musicians played trumpets and drums muffled by black cloth for funerals of those holding high rank.

And in many Western nations, at military funerals, a bugle sounds the last call.

In America, it is Taps.

In England and throughout the Commonwealth, it is the Last Post.

In France, they sound Aux Morts.

In Italy, the call for lights out is Silenzio d’Ordinanza (The Silence of the Ordinance), which is also used at military funeral services.

In Germany, it it not a trumpet call, but the song einen Kameraden (The Good Comrade) which is played.

On this Memorial Day, it is good to remember all those who died serving their countries. It is also good to turn our thoughts toward a day when such sacrifices will no longer be asked of our sons and daughters.

Nona Blyth Cloud has lived and worked in the Los Angeles area for the past 50 years, spending much of that time commuting on the 405 Freeway. After Hollywood failed to appreciate her genius for acting and directing, she began a second career managing non-profits, from which she has retired. Nona has now resumed writing whatever comes into her head, instead of reports and pleas for funding. She lives in a small house overrun by books with her wonderful husband.
View all posts by wordcloud9 →
This entry was posted in France, Germany, Italy, The Coffee Shop, United Kingdom, United States, War and tagged LAST NOTES - Bugles for the Fallen, Laurence Binyon, Memorial Day. Bookmark the permalink.

6 Responses to TCS: LAST NOTES – Bugles for the Fallen