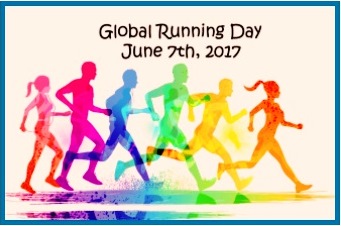 1099 – Knights and infantry of the First Crusade, led by Raymond of Toulouse, begin the Siege of Jerusalem, held by the Fatimid Caliphate

1494 – The Treaty of Tordesillas, signed by Ferdinand II and Isabella I, Prince John of Asturias, and John II of Portugal, divides the newly discovered lands outside Europe between Portugal and the Crown of Castile, along a meridian 370 leagues west of the Cape Verde Islands, ignoring the rights of the existing inhabitants

1628 – The Petition of Right, a major English constitutional document, is granted the Royal Assent by Charles I, prohibiting the monarch from non-Parliamentary taxation, forced billeting of soldiers, imprisonment without cause, and limiting use of martial law 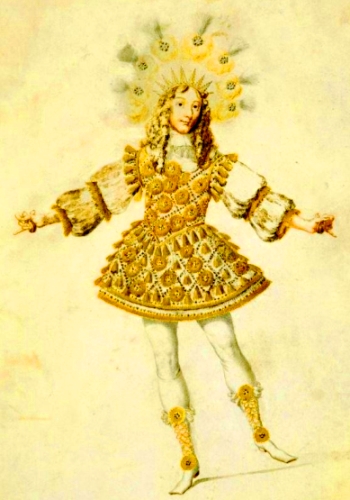 1769 – Daniel Boone begins exploring Kentucky; will found Boonesborough, one of the first Colonial settlements west of the Appalachians – the Kentucky Historical Society honors his contributions by sponsoring Boone Day *

1776 –  Richard Henry Lee presents the “Lee Resolution” to the Continental Congress. The motion is seconded by John Adams and leads to the Declaration of Independence

Beau Brummell, on the left wearing black, at Almack’s, a subscription-by-invitation-only
social club nicknamed “the Marriage Mart,” circa 1815

1788 – Day of the Tiles: Civilians in Grenoble toss roof tiles and various objects down upon royal troops, one of the earliest disturbances leading to the French Revolution

Paul Gauguin: Self-Portrait, left, and Nafea Faa Ipoipo (When Will You Marry?) – 1892

1899 – Carrie Nation, believing God called her, destroys Dobson’s Saloon in Kiowa, Kansas with “smashers,” rocks wrapped in paper. A leader in the prohibition movement, she and other women smash saloons with hatchets, in many  “hatchetations”

1909 – Virginia Apgar born, anesthesiologist, developed the Apgar score to assess the health of newborns, increasing infant survival rates. Pioneer in anesthesiology, raised  respect for the discipline; she warned use of some anesthetics during childbirth negatively affected infants; helped refocus March of Dimes from polio to birth defects

Taken during the Memphis Cotton Festival, by Marion Wolcott, circa 1939

1917 – Gwendolyn Brooks born, poet, first African American to win the Pulitzer Prize for Poetry (1950), and the first black woman to be named a Library of Congress Consultant in Poetry (1985—86)

1930 – NY Times editorial: “In our Style Book ‘Negro’ is now added to the list of words to be capitalized. It is not merely a typographical change; it is an act of recognition of racial self-respect for those who have been for generations in ‘the lower case.”

1933 – Otto Dix, notable artist of the Neue Sachlichkeit (New Objectivity) Movement, paints on this day The Seven Deadly Sins, an allegorical work representing the political situation in Germany, after he had been removed from his teaching position at the Dresden Art Academy by the Nazi regime, labeling him a degenerate. His WWI paintings The Trench and War cripples are burned, and Dix is forced to join the Nazi’s Reich chamber of Fine Arts and to promise he would paint only inoffensive landscapes, but he still worked on anti-Nazi paintings in secret, which will be discovered in 2012 among a large cache of paintings hidden away by an art dealer 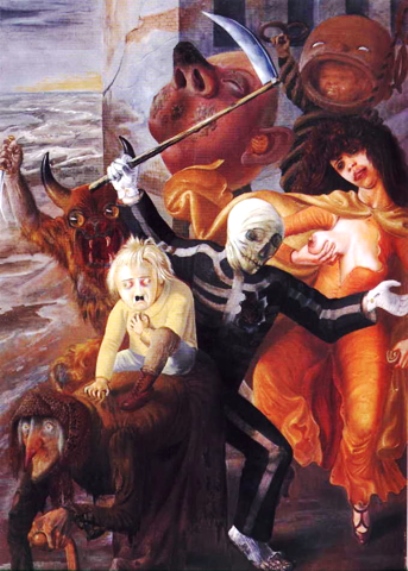 The Seven Deadly Sins: The hag is Avarice, ridden by Envy(with a Hitler mustache, added by Dix after the painting is exhibited); death is Sloth, representing the German people dragging their feet in acknowledging the Nazi danger; Anger is the red demon; Pride is the giant head with plugged ears, and whose mouth is an asshole; Lust is the bare-breasted woman; and Gluttony is the pig-like child at the back, head encased in a cookpot

1933 – The last collaboration between Kurt Weill and Bertolt Brecht is for the music and libretto of a ballet chanté (sung ballet) called The Seven Deadly Sins, after both of them had left Germany because of the rising power of the Nazis. It is produced, directed and choreographed by George Balanchine, premiering on this day in Paris. The French audience found it bewildering, especially since it was sung entirely in German, but German émigrés at the performance were enthusiastic 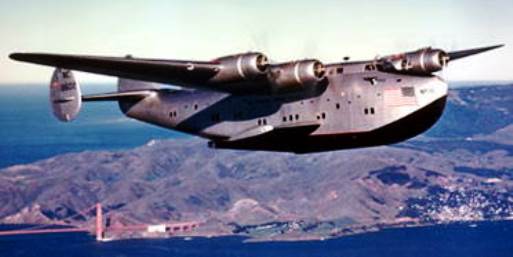 1946 – U.S. Supreme Court rules in Morgan v. Commonwealth of Virginia that racial segregation requirements on buses are unconstitutional, interfering with  interstate
commerce, and violate the 14th Amendment due process and equal protection clauses

1965 – The U.S. Supreme Court’s landmark 7-2 decision in Griswold v. Connecticut, cutting down state laws that made use of birth control by anyone, including married couples illegal, citing the “right to marital privacy” in deciding whether or when to have a child, which becomes the basis for extending right to privacy in later reproductive rights decisions, including Roe v. Wade

1968 – Women sewing machinists at Ford Motor Company Limited’s Dagenham plant in London go out on strike; Barbara Castle, the Secretary of State for Employment and Productivity in Harold Wilson’s government, intervenes and the strike ends three weeks later, after a deal that immediately increases their rate of pay to 8% below that of men, to rise to the same category B rate as the men the following year. This had repercussions in the U.S. as well: international media attention to the Dagenham strike contributed to the passage of the U.S. Equal Pay Act of 1970

1972 – The musical Grease opens on Broadway

1977 – Anita Bryant leads a successful, well-funded crusade by the right-wing Christian group “Save Our Children” to overturn a Dade County FL ordinance that bans sexual orientation discrimination in housing, employment, or public accommodation

1998 – James Byrd Jr. is murdered in Jasper TX by three white supremacists who drag him behind their pick-up truck until his unconscious body hits a culvert, decapitating him. The killers dump his torso in front of an African-American cemetery; the state of Texas passes a hate crime law, and the federal Matthew Shepard and James Byrd Jr. Hate Crimes Prevention Act is signed into law by President Obama on October 28, 2009

2012 – The remains of the Curtain Theatre, where some of Shakespeare’s plays were first performed, are found under a London pub 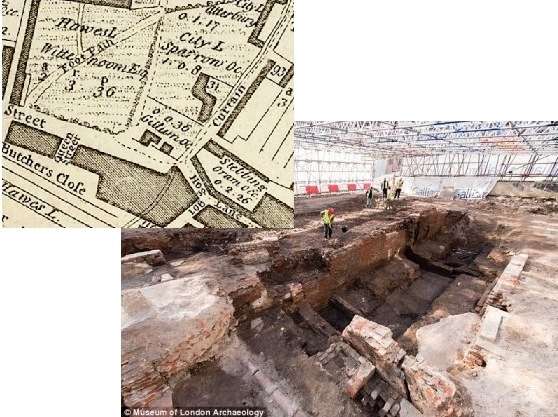 2016 – The first Global Running Day * is held, expanded from a National Running Day started in 2009 – tens of thousands of runners now participate, from 170 countries

Nona Blyth Cloud has lived and worked in the Los Angeles area for the past 50 years, spending much of that time commuting on the 405 Freeway. After Hollywood failed to appreciate her genius for acting and directing, she began a second career managing non-profits, from which she has retired. Nona has now resumed writing whatever comes into her head, instead of reports and pleas for funding. She lives in a small house overrun by books with her wonderful husband.
View all posts by wordcloud9 →
This entry was posted in History, Holidays, On This Day and tagged Amelia B. Edwards, Beau Brummell, Charles Rennie Mackintosh, Daniel Boone, Gwendolyn Brooks, Paul Gauguin, Virginia Apgar. Bookmark the permalink.
%d bloggers like this: