Fascinating profile of the delusional, batshit LtGen Michael Flynn. He thinks what he did was “capitalism.” https://t.co/If7vIPWXj8

Capitalism with a crony’s face … layered onto a number of intersecting social, financial, and data networks.

This vile paper-money and funding system; this system of Dutch descent, begotten by Bishop Burnet and born in hell; this system has turned everything into a gamble. There are hundreds of men who live by being the agents to carry on gambling… many of the gamblers live in the country; they write up to their gambling agent, whom they call their stockbroker; he gambles according to their order; and they receive the profit or stand to the loss. Is it possible to conceive a viler calling than that of an agent for the carrying on of gambling! And yet the vagabonds call themselves gentlemen.

How often can one think that money laundering has no labor effects because it is the accumulated finance capital surplus being transformed and exploited.

Similarly the machinations of finance capitalism manifest themselves in indulgences like yacht racing, where there is no real relation to the sponsors from vast global neocapitalism selling fossil fuel, upscale automobiles, and computer software.

And yet there are major national elements at work representing North/South and the 1% / 99%. Now one can see how they affect significant geopolitical and demographic change as state capitalism in the post-soviet period has evolved into kleptocratic crony capitalism.

What’s more galling is how US ruling class clowns have paraded exploitation as a mass spectacle complete with security theater, demonizing immigration, the arts, and race/class/gender differences.

Debt peonage arising from the dislocating taxes from land rent and monopoly rents is a key to the current crises of social division.

In keeping with his materialist view of history, Marx expected banking to be subordinated to the needs of industrial capitalism. Equity investment – followed by public ownership of the means of production under socialism – seemed likely to replace the interest-extracting “usury capital” inherited from antiquity and feudal times: debts mounting up at compound interest in excess of the means to pay, culminating in crises marked by bank runs and property foreclosures.

But as matters have turned out, the rentier interests mounted a Counter-Enlightenment to undermine the reforms that promised to liberate society from special privilege.

Instead of promoting capital investment in an alliance with industry and government, financial planners have sponsored a travesty of free markets.

Realizing that income not taxed is free to be capitalized, bought and sold on credit, and paid out as interest, bankers have formed an alliance between finance, insurance and real estate (FIRE) to free land rent and monopoly rent (as well as debt-leveraged “capital” gains) from taxation.

The result is that today’s economy is burdened with property and financial claims that Marx and other critics deemed “fictitious” – a proliferation of financial overhead in the form of interest and dividends, fees and commissions, exorbitant management salaries, bonuses and stock options, and “capital” gains (mainly debt-leveraged land-price gains). And to cap matters, new financial modes of exploiting labor have been innovated, headed by pension-fund capitalism and privatization of Social Security. As economic planning has passed from government to the financial sector, the alternative to public price regulation and progressive taxation is debt peonage.

The US ambassador to Qatar has stepped down after posting critical tweets about Donald Trump‘s administration after he fired FBI Director Comey.

The President claimed foreign leaders had singled the country out for funding “radical ideology”, prompting criticism over his failure to address similar allegations leveled at his Saudi allies.

Increasingly difficult to wake up overseas to news from home, knowing I will spend today explaining our democracy and institutions.

Diplomats explain & defend our political system.Can be tough when partisan acrimony so high, but there is still no greater country. #USA Ã°ÂÂÂºÃ°ÂÂÂ¸

#Qatar is a strong partner in combating terrorist financing and we will continue our work together. https://t.co/kddFQSD7TC

Ms Smith – who was appointed as the head diplomat in Doha by former President Barack Obama three years ago – has since tweeted that “Qatar is a strong partner in combating terrorist financing”, contradicting the US President’s public claims that the country is “a funder of terrorism at a very high level”…

Egypt has long thought Qatar’s support of Islamist groups Muslim Brotherhood was dangerous for their country.

Saudi Arabia also re-ignited tensions over Doha’s alleged support for Iran, which they claim could act to destabilise the region.

Trump has stakes in four companies that appear to be tied in business in the desert nation. The country’s state-owned carrier, Qatar Airways, has leased an office in Manhattan’s Trump Tower since 2008. Ivanka Trump told Hotelier Middle East in 2015 that the Trump Hotel Collection was eyeing opportunities in Qatar. Back to map.

Shortly after his presidential campaign got underway, according to his financial disclosures, Trump registered eight companies that could be related to a development project in Jeddah, Saudi Arabia’s second-biggest city. “Saudi Arabia, I get along great with all of them. They buy apartments from me,” Trump said at a campaign rally. Four of the eight companies have since dissolved. In February 2016, Trump said Saudi Arabia “blew up the World Trade Center.” (Fifteen of the Sept. 11 hijackers were Saudi citizens.) Saudi Prince Alwaleed bin Talal Alsaud reminded Trump on Twitter that he had helped “bail” him out in the past; according to the New York Times, the prince agreed to take majority control of New York’s Plaza Hotel when Trump faced financial upheaval in the 1990s and also bought a Trump yacht when the President-elect’s Atlantic City casinos were struggling. Back to map.

Money has no hygienic meaning even though there is dirty/clean money. Money laundering regulation involves banks in competitive cost-benefit strategies

There are regulatory mechanisms that in their political economy distinguish between criminal organizations, terrorist entities, and “normal” finance with a variety of agencies signaling violations.

More interesting in the case of the Gulf states are claims of terrorism and non-terrorism. The Trump Qatar accusations are actually a diversion from examining money laundering for things other than terrorism and other capital gains.

In the #TrumpRussia context, the intersection of financial laundering and demographic data laundering came together in a variety of media applications including the targeting of audiences as well as critical voting districts.

The prosecution of individuals leveraging influence in the #TrumpRussia can be layered over the overt/covert active measures, and layered over the capitalist social networks that laundered data. 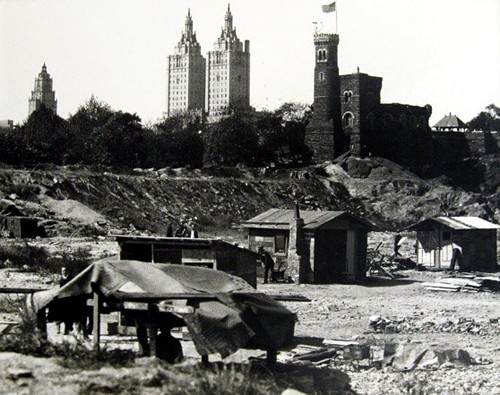 In Trump’s case he had a preexisting relationship with Russians who only coincidentally in the 2007 prosecution of Bayrock, revealed the money laundering that is ubiquitous — in such financial capital transactions.

Finally, the role of legal/illegal banking operations especially in tax havens can be layered onto the 2016 election just as one observes the relation between individuals bridging the GOP and Russian actors.

The strangeness of fictitious capital as fiction have come in its most epiphenomenal realms, like the withdrawal of corporate sponsorship of NYC’s Public Theater because of the purported costume blasphemy of god-emperor Trump in Shakespeare’s Julius Caesar.

Such spectacular noise near the original historical sites of Hoovervilles … the ultimate problem of rentier economies.

In financial regulation, “politically exposed person” (PEP) is a term describing someone who has been entrusted with a prominent public function.

A PEP generally presents a higher risk for potential involvement in bribery and corruption by virtue of their position and the influence that they may hold.

Recent weeks have seen revelations over vast money laundering schemes operating through Russian banks. Given President Trump’s alleged links to Russia, these reports have become even more important. Cerelia Athanassiou writes that these potential connections, in combination with Trump’s often murky real estate dealings, show just how vigilant regulators and financial institutions should be when it comes to looking out for and investigating money laundering.

‘Bank that lent $300m to Trump linked to Russian money laundering scam’, reads an ominous headline. The bank in question, Deutsche Bank – themselves implicated in recent and serious scandals involving failure to prevent Russian money laundering going through their organization – is investigating Trump’s accounts for any Russia links. This investigation does have an air of intrigue and scandal to it, but it is also important to keep in mind that it is simply a logical consequence of the due diligence that should be conducted on a so-called Politically Exposed Person (PEP, as they are referred to in Anti-Money Laundering parlance) by a financial institution eager to keep its compliance checks running smoothly.

The concern is that a president who is known for a particularly warm yet murky relationship with a country that has repeatedly been on sanctions lists might bring further trouble the Bank’s way. At the very least, PEPs undergo Enhanced Due Diligence to minimise the risk that any transactions they undertake through the relevant institution are a result of abuse of power…

This does not mean that dealing with PEPs is somehow prohibited, but FATF’s approach does set out enhanced regulations that recognise and account for PEPs’ power. The reputational risks to financial institutions of being linked to cases of abuse of power are significant – as might be borne out by the Deutsche-Trump relationship. Considering the financial system’s current infrastructure and the various links between the Trump administration and the Russian government, Deutsche Bank’s behaviour seems entirely proportional and reasonable…

A good primer on this is a case brought to public attention by Rachel Maddow, of the Russian billionaire, Dimitry Rybolovlev, buying a luxury estate from Trump at a significant profit to the latter.Although there is little evidence of Trump’s direct involvement in money laundering, the trail does suggest, at best, complete disregard for knowing the origins and legal status of any funds raised.

There are two interesting points in this case.

The purchase of the luxury estate of the Maison de l’Amitie took place at a time when Rybolovlev was going through divorce proceedings with his wife, reportedly trying to hide as much of his fortune from her as possible. This does not look like a case of money laundering, despite Maddow’s implications on this, but it does demonstrate quite neatly how real estate could be used to hide gains (including ill-gotten ones!)…

With Trump, where there is no pattern showing direct involvement in money laundering, there is at the same time a pattern suggesting carelessness about engaging with business partners of questionable repute. At worst, evidence might surface to suggest this is collusion in fraudulent activity; this is the suspicion at this stage.

The enthusiasm with which journalists like Maddow are pursuing the trail of Trump’s past financial dealings is to be welcomed, but it is also important that this goes hand in hand with explaining the full dynamics of money laundering and making sure to pursue the right leads. Combating money laundering is a constant process of linking the routine and the mundane to the bigger picture. 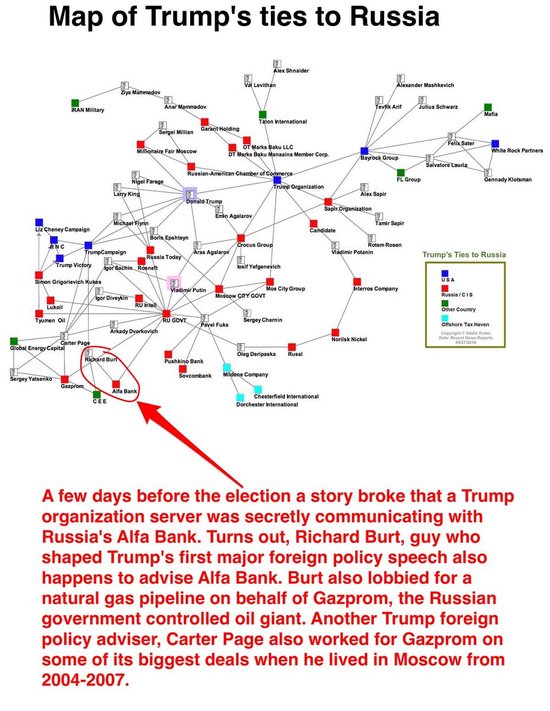 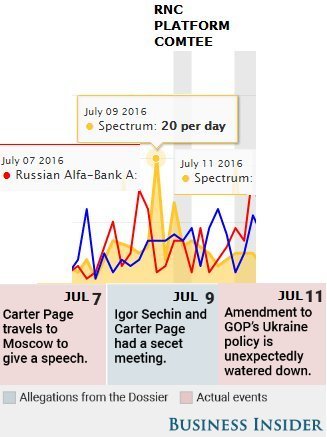