#TrumpRussia … Ron Wyden drops a hold, Treasury gives up documents, and Why was money connected to Putin pouring into Trump projects? 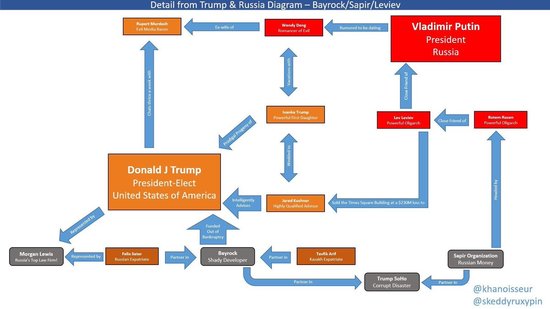 Trump-Soho financial documents will now become available to the Senate Intelligence committee, as a Tim O’Brien article in Bloomberg News describes the increased attention of the Special Counsel…following the money.

Robert Mueller is examining whether President Donald Trump obstructed justice when he fired James Comey as director of the Federal Bureau of Investigation, the Washington Post recently reported. As we’ve heard for months now, there is also a probe of possible collusion between Trump’s campaign team and the Kremlin to tilt the 2016 election in the president’s favor.

But the Justice Department inquiry led by Mueller now has added flavors. The Post noted that the investigation also includes “suspicious financial activity” involving “Russian operatives.” The New York Times was more specific in its account, saying that Mueller is looking at whether Trump associates laundered financial payoffs from Russian officials by channeling them through offshore accounts.

The release of a Ron Wyden Senate hold on nominee Sigal Mandelker, compelled Treasury to give up financial documents related to Russian involvement by Trump via NYC investments.

In other news from MSNBC and Bloomberg News, the RICO case related to Trump Soho and Felix ‘Pump and Dump’ Sater also moves forward.

In both cases a more direct line between Trump and Putin can be drawn via following the money.

Donald Trump Settled a Real Estate Lawsuit, and a Criminal Case Was Closed

In 2011, Mr. Trump and his co-defendants settled a suit involving one of his buildings amid a storm that threatened to cast a harsh light on how he did business.

Apparently, this all is related to a former business associate of Trump’s, Felix Sater, and Sater’s role in a Mafia-linked scheme. Lawyers are looking to unseal documents from a federal case involving Sater as they feel it will show the president committed fraud at the time.

Pointing to the combination of Sen. Ron Wyden (D-OR) taking a hold off of one of Trump’s Treasury Department nominees and a RICO lawsuit proceeding against one of Sater’s companies, Maddow said that O’Brien has now been told that this could show a connection between Trump and Russia. (Wyden said he would only drop the hold if Trump-Russia docs were released.)

Reading from O’Brien’s report that will be out Wednesday morning, Maddow noted that the financing that Sater put together for Trump real estate projects were done in a certain way because “the investment firm was closer to Putin.”

“If Tim O’Brien’s reporting proves out,” Maddow said. “We’re left with the question — Why’d that happen? Why was money connected to Putin pouring into Trump projects? Why did they do that?”

Remember the President is heading into this storm defended by the lawyer who handled his divorces and his bankruptcies.

My Lawyers Got Trump to Admit 30 Lies Under Oath

Trump sued me, then had to acknowledge 30 times during a deposition that he had lied over the years about a wide range of issues.

POTUS told me he was tape-recording our conversations, too. Under oath, he had to admit that wasn’t true: https://www.bloomberg.com/view/articles/2017-06-12/trump-s-history-of-lies-according-to-biographer-timothy-o-brien …

Meanwhile, Trump is mired in a probe that now pivots off sensitive topics for him and his family: their money, their deals and Russia – all of which will test his promise to testify under oath to Mueller and his investigators.

10 Responses to #TrumpRussia … Ron Wyden drops a hold, Treasury gives up documents, and Why was money connected to Putin pouring into Trump projects?