#TrumpRussia gets even more tangled with dark web, deep state, and dim-orange-wit

Apparently there was an actual corporation (LLC) for a possible conspiracy- what HRC called a “factory for conspiracy-theory machines”.

The Mercer set (Conway/Bannon) and now the Kochs’ ALEC(Nelson), perhaps Biglygate will bring the entire GOP (Clovis brought Carter Page to the RNC) down.

More likely it’s protracted lawfare that will see many cutting their losses, perhaps to the squared Oval office. Trump will never admit he’s a dupe/dope. Or maybe he was just an ignorant front, except we cannot expect that he’ll admit that he was just a tool and cut Kushner loose.

The Executive Twig is an awesome prize and apparently those with money sought to get the White House by any means, far beyond ethics, and even farther beyond patriotism with #TrumpRussia. We’ll soon see the differences between a “factory for conspiracy-theory machines” and actual conspiracies.

Peter W. Smith tried to hire Matt Tait for his project, and showed him a document creating an independent-looking organization to try to acquire the stolen emails. The document, Tait reports, “detailed a company Smith and his colleagues had set up as a vehicle to conduct the research: ‘KLS Research’, set up as a Delaware LLC ‘to avoid campaign reporting,’ and listing four groups who were involved in one way or another.” This certainly appears like an attempt to mask the Trump campaign’s involvement in the plot.

The document listed a series of high-level Trump campaign officials: Steve Bannon, Kellyanne Conway, Sam Clovis, Lt. Gen. Flynn, and Lisa Nelson. Bannon and Conway, contacted by the Journal, deny any involvement with Smith. But Smith’s comments to Tait indicate a fairly close understanding of Trump campaign internal dynamics. It is possible he was bluffing, but he seemed to be displaying authentic insider credentials.

The late Peter W. Smith, perhaps much more unwitting or at least, more diffident than Trump, colluded with Russians in the quest for HRC emails. His zeal in contacting hackers as his last posts indicate, was less concerned about the legality of means or national origin than the end goal of defeating Hillary.

So he’s now more than a minor example of the bridges between the GOP and Russians that confirm collusion.

Matt Tait, a UK IT analyst, had contact with some of the principals, but more importantly connects in a lawfareblog article, some of the Russian hackers with Mike Flynn and some specific members of the Trump campaign, particularly those overlapping with Mercer and Cambridge Analytica.

Let’s hope he’s cooperative when the investigators talk to him. Let’s also hope he comes to no harm, considering the health of some subjects in #TrumpRussia.

The practices rather than the speculative theories of conspiracy are at work since it continues to be about following the money which could be a problem because of bit-coins. That form of less traceable payments could be problematic, but remember that #TrumpRussia is about the overlays of multiple social networks. There may be degrees of separation and circumstantial coordination that show a kind of agency which makes the recent suggestion of Trumpian racketeering relevant. It’s up to the investigators and the prosecutors to get to the bottom, however dark and tangled.

In this case the hackers’ connections to the Trumpists could be obscured in a “dark web”, except that the light is getting stronger at the periphery so that even the “holes” in the social network can be now filled in. Jon Iadonisi, as an associate of many of the principals could be one key to the connections. There’s a ring of keys in #TrumpRussia.

Where these disparate elements become the subject of the Mueller investigation among others, they will not only firm up the Russian connection, but also the connection to Trump himself. His willingness to make numerous public statements about the Russians and the DNC/HRC information is not unlike his foolishness in giving up code-word classified materials to the Russians in casual conversation.

Colt Ventures, VisSense and the connections to Darren Blanton, a Trump campaign funder connected to Steve Bannon are probably already on the Mueller investigation radar.

Trumpists are now trying to shift the story to some disinformation about this being some “deep state” C-T plot, which as I have indicated elsewhere is a canard of the tinfoil decoy variety.

Tait, however, helps to fill another hole in the puzzle, that GOP hacktivism had many potentially interrelated parties, included but not limited to senior Trump campaign officials.

I read the Wall Street Journal’s article yesterday on attempts by a GOP operative to recover missing Hillary Clinton emails with more than usual interest. I was involved in the events that reporter Shane Harris described, and I was an unnamed source for the initial story. What’s more, I was named in, and provided the documents to Harris that formed the basis of, this evening’s follow-up story, which reported that “A longtime Republican activist who led an operation hoping to obtain Hillary Clinton emails from hackers listed senior members of the Trump campaign, including some who now serve as top aides in the White House, in a recruitment document for his effort”…

The largest group named a number of “independent groups / organizations / individuals / resources to be deployed.” My name appears on this list. At the time, I didn’t recognize most of the others; however, several made headlines in the weeks immediately prior to the election.

My perception then was that the inclusion of Trump campaign officials on this document was not merely a name-dropping exercise. This document was about establishing a company to conduct opposition research on behalf of the campaign, but operating at a distance so as to avoid campaign reporting. Indeed, the document says as much in black and white.

The combination of Smith’s deep knowledge of the inner workings of the campaign, this document naming him in the “Trump campaign” group, and the multiple references to needing to avoid campaign reporting suggested to me that the group was formed with the blessing of the Trump campaign.

In the Journal’s story this evening, several of the individuals named in the document denied any connection to Smith, and it’s certainly possible that he was a big name-dropper and never really represented anyone other than himself. If that’s the case, Smith talked a very good game.

I’m sure readers are wondering: why did I keep quiet at the time? Actually, I didn’t. In the fall, prior to the election, I discussed the events of the story first with a friend, and secondly with a journalist. The trouble was that neither I nor the reporter in question knew what to make of the whole operation. It was certainly clear that the events were bizarre, and deeply unsettling. But it wasn’t reportable.

After all, Clinton’s private emails never materialized. We couldn’t show that Smith had been in contact with actual Russians. And while I believed—as I still do—that he was operating with some degree of coordination with the campaign, that was at least a little murky too.

The story just didn’t make much sense—that is, until the Journal yesterday published the critical fact that U.S. intelligence has reported that Russian hackers were looking to get emails to Flynn through a cut-out during the Summer of 2016, and this was no idle speculation on my part.

Note that Clovis recruited Carter Page for the RNC and Trump’s campaign. Conway comes from the Mercer set, as does Steve Bannon. 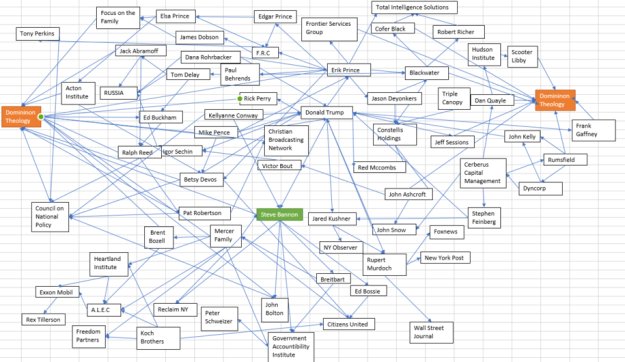 3 Responses to #TrumpRussia gets even more tangled with dark web, deep state, and dim-orange-wit