Veer (to the center again), but Trust no Fly … Why a Democrat neo-conservative alliance is an old, bad idea 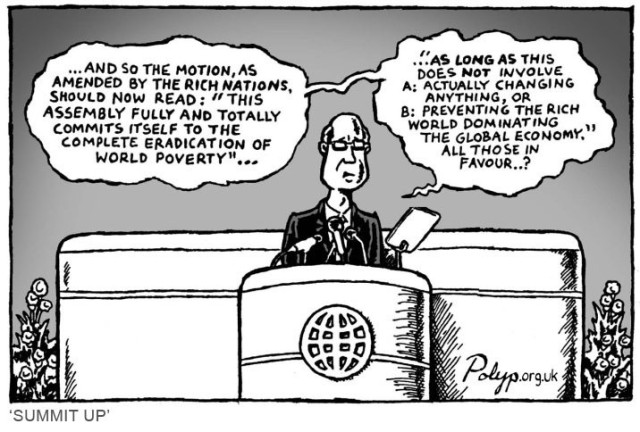 Glenn Greenwald writes another warning of the fundamental problems of the Democratic party and its foreign policy history as rooted in neoconservative ideologies, or at least a susceptibility to them. It may seem oxymoronic to consider that there are neoconservative Democrats, but that is a line of thought that goes back through the Cold War where Democrats could endorse and implement hawkish policies in the name of some rationalized technocracy.

While Greenwald identifies the policy contours, he fails to consider how it is a political economy problem that must delimit the fundamental failure of any neoconservative/Democratic party alliance. Centrist policy lacks any critique that delegitimizes neoliberalism and inequality manifested by corporatism and kleptocracy. Changing MIC foreign sales policy alone could make the difference in selected regions and sectors.

Trump’s feckless version of capitalist creative destruction is symptomatic of a political economy of anti-democratic chaos which must end. The perfect storm of 2016 demonstrated how disastrous US politics can become, and Democrats cannot ally themselves with otherwise RW groups. Democrats cannot blind themselves to their inherent contradictions and absurdities like Bill Kristol’s one-time support of Sarah Palin.

Where the problems occur for Democrats are the maintenance of class/social division rather than seeing possibilities that do not return the world to marginalist attempts at monetizing all of its crises and maintaining an unequal and inhumane status quo.

Greenwald’s warning is timely but whether it makes a difference is best left for more direct and decisive action beyond accommodating neoconservatives and veering towards a center all too willing to submit to compromise in the name of a deluded bipartisanship. Policy that favors the center in “center-left” will inevitably submit to initiatives that run counter to progressive solutions in areas like economic growth, education reform, and regulatory reform.

Democrats’ time is better spent negotiating progressive policy solutions that have structural implications even if the interim is fraught with the realistic challenges of GOP malevolence.

One of the most under-discussed yet consequential changes in the American political landscape is the reunion between the Democratic Party and the country’s most extreme and discredited neocons.

While the rise of Donald Trump, whom neocons loathe, has accelerated this realignment, it began long before the ascension of Trump and is driven by far more common beliefs than contempt for the current president.

A newly formed and, by all appearances, well-funded national security advocacy group, devoted to more hawkish U.S. policies toward Russia and other adversaries, provides the most vivid evidence yet of this alliance.

Calling itself the Alliance for Securing Democracy, the group describes itself as “a bipartisan, transatlantic initiative” that “will develop comprehensive strategies to defend against, deter, and raise the costs on Russian and other state actors’ efforts to undermine democracy and democratic institutions,” and also “will work to publicly document and expose Vladimir Putin’s ongoing efforts to subvert democracy in the United States and Europe.”

This Democrat/neocon reunion has been developing long before anyone believed Donald Trump could ascend to power. https://t.co/exL11fn2ui

It is, in fact, the ultimate union of mainstream Democratic foreign policy officials and the world’s most militant, and militaristic, neocons. The group is led by two longtime Washington foreign policy hands, one from the establishment Democratic wing and the other a key figure among leading GOP neocons.

The Democrat, Laura Rosenberger, served as a foreign policy adviser for Hillary Clinton’s 2016 presidential campaign and chief of staff to two Obama national security officials. The Republican is Jamie Fly, who spent the last four years as counselor for foreign and national security affairs to one of the Senate’s most hawkish members, Marco Rubio; prior to that, he served in various capacities in the Bush Pentagon and National Security Council…

In sum — just as was true of the first Cold War, when neocons made their home among the Cold Warriors of the Democratic Party — on the key foreign policy controversies, there is now little to no daylight between leading Democratic Party foreign policy gurus and the Bush-era neocons who had wallowed in disgrace following the debacle of Iraq and the broader abuses of the war on terror. That’s why they are able so comfortably to unify this way in support of common foreign policy objectives and beliefs…

What we see instead are leading Democratic foreign policy experts joining hands with the world’s worst neocons to form new, broad-based policy advocacy groups to re-shape U.S. foreign policy toward a more hostile, belligerent and hawkish posture. We see not isolated agreement with neocons in opposition to Trump or on single-issue debates, but a full-scale embrace of them that is rehabilitating their standing, empowering their worst elements, and reintegrating them back into the Democratic Party power structure…

All of that has changed, thanks to the eagerness of Democrats to embrace them, form alliances with them, and thus rehabilitate their reputations and resurrect their power and influence. That leading Democratic Party foreign policy officials are willing to form new Beltway advocacy groups in collaboration with Bill Kristol, Mike Rogers, and Mike Chertoff, join arms with those who caused the invasion of Iraq and tried to launch a bombing campaign against Tehran, has repercussions that will easily survive the Trump presidency.

2 Responses to Veer (to the center again), but Trust no Fly … Why a Democrat neo-conservative alliance is an old, bad idea