Trump could salvage what has been a mediocre trip to Asia by a small political act, even if it might give him the same Executive Order troubles he’s experienced with Congress.

There have been several decades of constant interest in returning Philippine war trophies from the 1901 Balangiga Massacre and its aftermath, much like Poland wants more WWII reparations from Germany.

Will Lord Dampnut seize on this request while wanting a branding win for Trump Tower in the Philippines, as well as currying favor with other groups receptive to Trumpism … because heritage. Trump could even appear to be diplomatic if a compromise was negotiated with one of the three bells returned.

More distractions are needed as #TrumpRussia marches on, and Agent Orange is running out of options, and his off-the-cuff tweetery is not helping. This is the kind of low-risk deal with minimal military effect that is more optimal for Mr. Bone Spur.

There are even Clinton and Rohrabacher angles for Trump to play in this event. But will Duterte be smart enough to play Trump with enough adoration to consolidate his own authoritarian rule.

Philippine President Rodrigo Duterte is expected to ask President Trump to return three war trophies that U.S. troops took from a village more than 100 years ago during the Philippine-American War, according to CBS News.

“We are aware that the Bells of Balangiga have deep significance for a number of people, both in the United States and in the Philippines,” a U.S. national security spokesman told CBS News.

“We will continue to work with our Filipino partners to find a resolution,” the spokesman added.

The Philippines has repeatedly called for the Bells of Balangiga, which were taken by U.S. troops in retaliation for the “Balangiga massacre” in 1901, to be returned, calling them a part of the country’s national heritage.

Despite Philippine independence in 1946, the U.S. has yet to return the bells. One of them is located on a military base in South Korea, and the other two reside on an Air Force base in Wyoming.

The Balangiga bells are three church bells taken by the United States Army from the town church of Balangiga, Eastern Samarin the Philippines as war trophies after reprisals following the Balangiga massacre in 1901 during the Philippine-American War. One church bell is in the possession of the 9th Infantry Regiment at Camp Red Cloud, their base in South Korea,[1][2] while two others are on a former base of the 11th Infantry Regiment at F. E. Warren Air Force Base in Cheyenne, Wyoming.[3] At least one of the bells had tolled to signal the surprise attack by the Filipinos while the American troops were eating breakfast…

On September 28, 1901, Filipino militants from the village of Balangiga ambushed Company C of the 9th U.S. Infantry Regiment, while they were at breakfast, killing an estimated 48 and wounding 22 of the 78 men of the unit, with only four escaping unhurt. The villagers captured about 100 rifles and 25,000 rounds of ammunition. An estimated 20 to 25 of the villagers had died in the fighting, with a similar number of wounded.[4]

In reprisal, General Jacob H. Smith ordered that Samar be turned into a “howling wilderness” and that any Filipino male above ten years of age capable of bearing arms be shot. From the burned-out Catholic town church, the Americans looted three bells which they took back to the United States as war booty.

The 9th U.S. Infantry Regiment, however, maintains that the single bell in their possession was presented to the regiment by villagers when the unit left Balangiga on April 9, 1902.[5] Smith and his primary subordinate, Major Littleton Waller of the United States Marine Corps were both court-martialled for illegal vengeance against the civilian population of Samar. Waller was acquitted of the charges. Smith was found guilty, admonished and retired from service, but charges were dropped shortly after. He was later hailed as a war hero.[6]

American military historians’ opinions on the Samar campaign are echoed in the February 2011 edition of the US Army’s official historical magazine, Army History Bulletin: “…the indiscriminate violence and punishment that U.S. Army and Marine forces under Brig. Gen. Jacob Smith are alleged to have unleashed on Samar have long stained the memory of the United States’ pacification of the Philippine Islands”.[29] 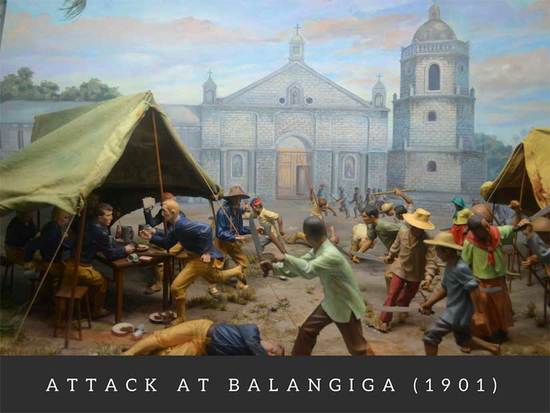 With Trump in the Philippines today, here is my article on the controversial Bells of Balangiga for @nybooks. https://t.co/RDvzO1PmR6