In many northern places, winter has already arrived: the summer birds left some time ago for the warmth of southern climes, the trees are bare, and the first snow has fallen. But whether the view from your window is icicles or kids on bicycles, we have all left spring or autumn behind, and the natural rhythm of Life slows down – it’s only humans who keep on racing, trying to catch the Future. The planet’s other land and sky dwellers are settling down for a winter’s nap, or a long, lazy day in the sun.

This week’s poets each have something particular to say about this time of year. First up is William Carlos Williams (1883-1963), an American physician, novelist and poet, who managed to combine life as a small town doctor with being part of the modern imagist revolution in American prose and poetry. Though born in the U.S., his father was English and his mother was Puerto Rican, giving him a rich and diverse cultural heritage to draw upon. Many of his contemporaries became expatriates in Europe, developing new ways of writing out of their disaffection with America, yet still being out-of-place abroad. The work of William Carlos Williams fits with the expats, but also stands apart.

All the complicated details

of the attiring and
the disattiring are completed!
A liquid moon
moves gently among
the long branches.
Thus having prepared their buds
against a sure winter
the wise trees
stand sleeping in the cold.

hours that float idly down —
the blizzard
drifts its weight
deeper and deeper for three days
or sixty years, eh? Then
the sun! a clutter of
yellow and blue flakes —
Hairy looking trees stand out
in long alleys
over a wild solitude.
The man turns and there —
his solitary track stretched out
upon the world.

“Winter Trees” and “Blizzard” from Sour Grapes: A Book of Poems (1921) by William Carlos Williams, reprinted in 2017

Gail Mazur (1937 – ) is from Massachusetts, and graduated from Smith College. She has published several collections of poetry, including  They Can’t Take That Away from Me (2001), a finalist for the National Book Award. She and her husband, artist Michael Mazur, founded Artists Against Racism and the War in 1968. In 1973, she founded the Blacksmith House Poetry Series in Harvard Square, which became a meeting place for poets, with weekly readings by both locals and internationally known poets. She is Distinguished Senior Writer in Residence in Emerson College’s graduate program and has served for many years on the Writing Committee of the Fine Arts Work Center in Provincetown.

In the warming house, children lace their skates,
bending, choked, over their thick jackets.

A Franklin stove keeps the place so cozy
it’s hard to imagine why anyone would leave,

clumping across the frozen beach to the river.
December’s always the same at Ware’s Cove,

the first sheer ice, black, then white
and deep until the city sends trucks of men

with wooden barriers to put up the boys’
hockey rink. An hour of skating after school,

of trying wobbly figure-8’s, an hour
of distances moved backwards without falling,

then—twilight, the warming house steamy
with girls pulling on boots, their chafed legs

aching. Outside, the hockey players keep
playing, slamming the round black puck

until it’s dark, until supper. At night,
a shy girl comes to the cove with her father.

Although there isn’t music, they glide
arm in arm onto the blurred surface together,

braced like dancers. She thinks she’ll never
be so happy, for who else will find her graceful,

find her perfect, skate with her
in circles outside the emptied rink forever?

“Ice” from Zeppo’s First Wife: New and Selected Poems by Gail Mazur – © 2005 by The University of Chicago

Grace Schulman (1935 – ) was born in New York City, the only child of a Polish Jewish immigrant father and an American mother.  She was married to scientist Jerome L. Schulman until his death in 2016.  Schulman is distinguished professor of English at Baruch College, CUNY, served as the poetry editor of the Nation (1972-2006), and has published six collections of poetry.

Squinting through eye-slits in our balaclavas,
we lurch across Washington Square Park
hunched against the wind, two hooded figures
caught in the monochrome, carrying sacks 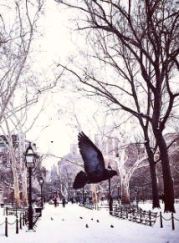 seem to bulk larger, tilted under the arch
and still lit in three colors. Once in January,

we found a feather here and stuffed the quill
in twigs to recall that jay. The musical fountain
is here, its water gone, a limestone circle
now. Though rap succeeds the bluegrass strains

we’ve played in it, new praise evokes old sounds.
White branches mimic visions of past storms;
some say they’ve heard ghosts moan above this ground,
once a potter’s field. No two stones are the same,

of course: the drums, the tawny pears we hold,
are old masks for new things. Still, in a world
where fretted houses with façades are leveled
for condominiums, not much has altered

here. At least it’s faithful to imagined
views. And, after all, we know the sycamore
will screen the sky in a receding wind.
Now, trekking home through grit that’s mounting higher,

faces upturned to test the whirling snow,
in new masks, we whistle to make breath-clouds form
and disappear, and form again, and O,
my love, there’s sun in the crook of your arm.

They are a gift I have wanted again.

Wanted: One moment in mountains
when winter got so cold
the oil froze before it could burn.
I chopped ferns of hoarfrost from all the windows
and peered up at pines, a wedding cake
by a baker gone mad. Swirls by the thousand
shimmered above me until a cloud
lumbered over a ridge,
bringing the heavier white of more flurries.

I believed, I believed, I believed
it would last, that when you went out
to test the black ice or to dig out a Volkswagon
filled with rich women, you’d return
and we’d sputter like oil,
match after match, warm in the making.
Wisconsin’s flat farmland never approved:
I hid in cornfields far into October,
listening to music that whirled from my thumbprint.
When sunset played havoc with bright leaves of alders,

I never mentioned longing or fear.
I crouched like a good refugee in brown creeks
and forgot why Autumn is harder than Spring.
But snug on the western slope of that mountain
I’d accept every terror, break open seals
to release love’s headwaters to unhurried sunlight.
Weren’t we Big Hearts? Through some trick of silver
we held one another, believing each motion the real one,
ah, lover, why were dark sources bundled up
in our eyes? Each owned an agate,

marbled with anguish, a heart or its echo,
we hardly knew. Lips touching lips,
did that break my horizon
as much as those horses broke my belief?
You drove off and I walked the old road,
scolding the doubles that wanted so much.
The chestnut mare whinnied a cloud into scrub pine.
In a windless corner of a corral,
four horses fit like puzzle pieces.
Their dark eyes and lashes defined by the white.

The colt kicked his hind, loped from the fence.
The mares and a stallion galloped behind,
lifting and leaping, finding each other
in full accord with the earth and their bodies.
No harm ever touched them once they cut loose,
snorting at flurries falling again.
How little our chances for feeling ourselves.
They vanished so quickly—one flick of a tail.
Where do their mountains and moments begin?
I stood a long time in sharpening wind.

Since it is not winter in the Southern Hemisphere, and winter where I live is not at all like the winter represented in these other poems, I am including two more poems, which show what December is like when there is no snow in the forecast.

David Malouf (1934 – ) was born in Queensland, Australia, to a Lebanese-Christian father and English-Jewish mother. He is both a fiction and non-fiction writer, as well as a poet. Malouf has published ten novels and six collections of poetry. Among his awards are the 2000 Neustadt International Prize for Literature, a 2000 Lannan Literary Award, and the 1993 Los Angeles Times Fiction prize.

Here all things responsive:
flesh to the steady warmth
of flesh, that all day soaks up sunlight, giving
it back now, like the rocks,
your body giving of its warm sea-salt.

Now smooth house-timbers shed
their gold – to the cool touch of the evening air
responding, nail and rafter;
this house has a single room, the door to your room
opens, and I’m there.

No walls: air moving free in the open windows,
swirling of light in ears
and hands, cups on shelves, and washing over
our salty nakedness; a dawn a net
of sea-light on the floor.

Sandgrains, the insect simmer
of grass; heat-ripples float the house away,
and we’re more than one step now
above the earth; clouds move in mirrors, the limitless Pacific
rocks in their frames.

Happy: the foam and glitter
of leaves, and smooth waves combing
white over green, whitewater over seal-rocks’ grey and black.
Our bodies hoard their summer –
at night, in each other’s arms, we touch the sun . . .

And finally, one of my poems, because both my hometown of Phoenix and my adopted city of Los Angeles have Southwestern desert winters, more akin to the Middle East than the Midwest. (Nona Blyth Cloud – December 2015)

Another Kind of Christmas

Whatever the weather is like where you live, I hope you will take a little time to stop and catch your breath, and appreciate the scenery of your season.

Nona Blyth Cloud has lived and worked in the Los Angeles area for the past 50 years, spending much of that time commuting on the 405 Freeway. After Hollywood failed to appreciate her genius for acting and directing, she began a second career managing non-profits, from which she has retired. Nona has now resumed writing whatever comes into her head, instead of reports and pleas for funding. She lives in a small house overrun by books with her wonderful husband.
View all posts by wordcloud9 →
This entry was posted in Poetry, Word Cloud and tagged David Malouf, Gail Mazur, Grace Schulman, Roberta Hill Whiteman, William Carlos Williams, Winter, Winter Solstice, Wintertide. Bookmark the permalink.
Loading Comments...
%d bloggers like this: