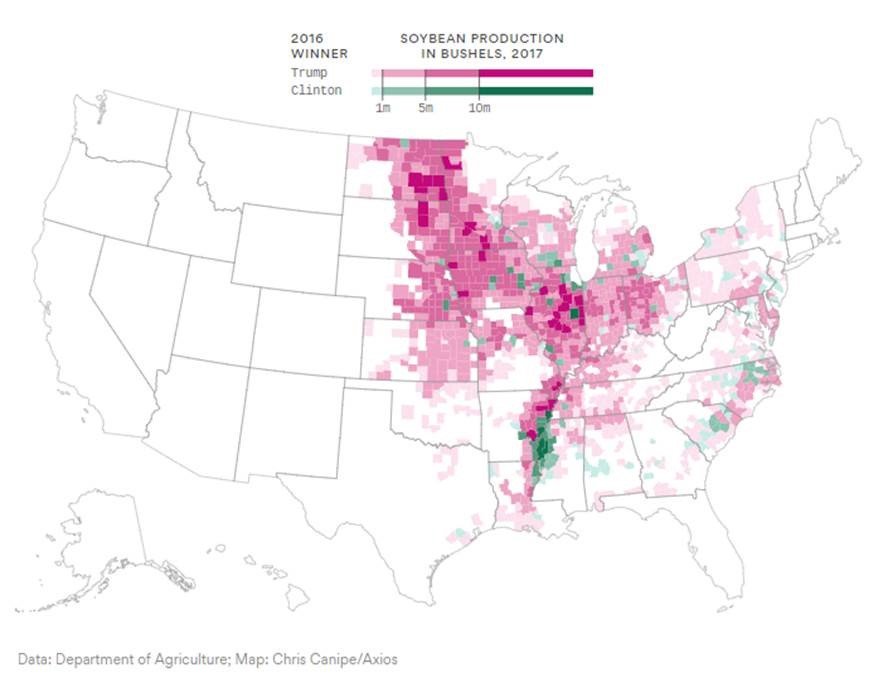 US President Donald Trump’s recently announced import tariffs on steel, aluminum, and $60 billion in other goods that the US imports from China each year are in keeping with his record of responding to nonexistent problems. Unfortunately, while Trump captures the world’s attention, serious real problems go unaddressed. www.project-syndicate.org/…

Grand Kleptocrat Trump will crater the US economy because he thinks trade wars are simply about firms, industries, and markets, rather than people working and living in regions. It’s not as simple as the revanchist profit touted by Agent Orange.

A stinging editorial in the Quad City Times in Iowa declared that voters had been “conned” by Trump on trade. “Eight of the country’s top 10 soybean producers voted for Trump in 2016.”

In just one week, Trump has already flip-flopped from his irrational claim that “trade wars are good, and easy to win.”

What’s obvious is that Trump’s base is going to pay the biggest price for his reckless tariff rhetoric.

“Many of the farmers who helped propel Donald Trump to the presidency fear becoming pawns in his escalating trade war with China, which threatens markets for soybeans, corn and other lifeblood crops in the Upper Midwest,” the Washington Post reported on Monday.

Trump to farmers: My trade war has to hurt you ‘for the country’

“These are great patriots. They understand that they’re doing this for the country.”

Many farmers have expressed fear that their livelihoods could be impacted in the escalating trade war, given that China is a major market for agricultural exports, particularly soybean and sorghum.

Trump considers Depression-era program to bail out farmers caught in his trade war with China https://t.co/bQJVaZSao4

Trump’s aides are looking at ways to use the Commodity Credit Corporation, a division of the Agriculture Department that was created in 1933 to offer a financial backstop for farmers.

But while the White House is considering the idea as a way to protect farmers if China slaps tariffs on U.S. agricultural products, some GOP lawmakers have told the administration that the approach will not work. The program, the lawmakers say, will not be able to provide the needed relief to farmers, and using it will further inflame trade tensions with China.

Economic warfare, while more profitable for the most avaricious capitalist, will also ratchet up conflicts in non-economic areas and ultimately create greater social division and  inequality.

There will be significant repercussions for the rest of the world if America moves to unravel today’s system of open, rules-based global trade – a system of which the US has been the chief architect. Only if other countries absorb the lessons of previous periods when revanchist trade techniques were used can they preemptively mitigate the effects of Trump’s measures.

Key point: When the U.S. counters in a trade war, it’s hurting *Americans*.

The question is, which superpower can continue punching its own people in the face for the longest?

This article at 538.com is worth your time.

Over the course of a few games, players tended to become less cooperative (imposing more tariffs overall) and more retaliatory (introducing tariffs of their own in response their opponent’s tariffs). And they became slightly less likely to mimic the behavior of their trading partner. All of this was a recipe for trade wars.

The CBO will release its economic and budget outlook report this week showing that the federal budget deficit will be at least $1,000,000,000,000 every year Trump is president. https://t.co/cp6BZ52whQ

4 Responses to Depression-era policy to return for farmers screwed by Trump trade war.