1477 – The Pazzi family of Florence, wealthy bankers, plot with Francesco Salvati and Girolamo Riario to murder Lorenzo de’ Medici and his brother Giuliano to oust the Medici family as rulers of Florence; Giuliano is killed during mass in the Duomo of Florence, but the wounded Lorenzo escapes, and most of the conspirators are quickly rounded up and summarily executed

1564 – William Shakespeare is baptized in Stratford-upon-Avon in England

1785 – John James Audubon born, American ornithologist, naturalist, and painter noted for his extensive studies of American birds and his detailed illustrations of the birds in their natural habitats; The Birds of America

Shore Lark from The Birds of America

1802 – Napoleon Bonaparte signs a general amnesty to allow all but about one thousand of the most notorious émigrés of the French Revolution to return to France, as part of a reconciliary gesture with the factions of the Ancien Régime and to eventually consolidate his own rule

1803 – European scientists become convinced that meteors exist when thousands of meteor fragments fall from the skies of L’Aigle, France

1882 – Jessie Redmon Fauset born, author, poet and editor for the NAACP magazine The Crisis, part of the Harlem Renaissance

1900 – Eva Aschoff born, German visual artist, bookbinder and calligrapher; noted for her decorated papers, she had her own bookbinding shop in Freiberg (1928-1964)

1907 – Julia Godman Ruuttila born, union recruiter, activist and journalist, worked for the CIO’s International Woodworkers of America during the eight-and-a-half-month lock-out in 1937, and raised community support; protested the Vietnam War; still walked in picket lines at 80 despite asthma, ulcers, arthritis and angina

1916 – Morris West born, Australian author and playwright; The Shoes of the Fisherman

I. M. Pei in front of his glass pyramid at the Louvre, Paris

1933 – The Gestapo, the official secret police force of Nazi Germany, is established 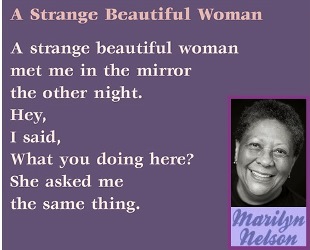 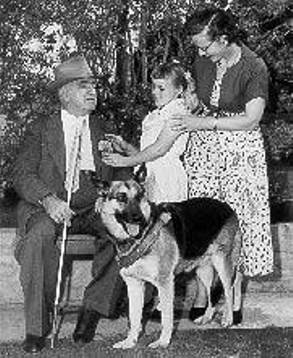 Joseph Jones, Sr. with guide dog Lucy, 1957 –
one of the earliest successes

1989 – The ‘April 26 Editorial’ is published on the front page of the People’s Daily during the Tiananmen Square protests in Beijing, calling the student movement as a destabilizing anti-party revolt that should be resolutely opposed at all levels of society. As the first authoritative document from the top leadership on the growing movement, it is interpreted as a ‘no-tolerance’ party policy toward student protesters and their sympathizers. Students are enraged, and even larger numbers come to Tiananmen Square the following day 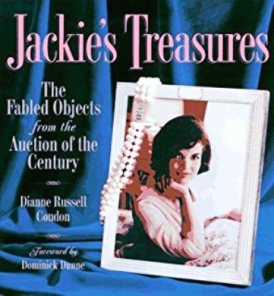 2005 – Under international pressure, Syria withdraws the last of its 14,000 troop military garrison in Lebanon, ending its 29-year military domination

Nona Blyth Cloud has lived and worked in the Los Angeles area for over 50 years, spending much of that time commuting on the 405 Freeway. After Hollywood failed to appreciate her genius for acting and directing, she began a second career managing non-profits, from which she has retired. Nona has now resumed writing whatever comes into her head, instead of reports and pleas for funding. She lives in a small house overrun by books with her wonderful husband.
View all posts by wordcloud9 →
This entry was posted in History, Holidays, On This Day and tagged 'Ma' Rainey, Charles F. Richter, I.M. Pei, Julia Godman Ruuttila, Ludwig Wittgenstein, Marcus Aurelius, Marilyn Nelson. Bookmark the permalink.
Loading Comments...
%d bloggers like this: