585 BC – According to Herodotus, a solar eclipse occurs, as predicted by the Greek philosopher and scientist Thales of Miletus. The eclipse is interpreted as an omen, which stops a battle between the Medes and the Lydians, who agree to a truce. This is one of the cardinal dates from which other dates can be calculated

1533 – Thomas Cranmer, Archbishop of Canterbury, declares the marriage of Henry VII of England and Anne Boleyn to be valid 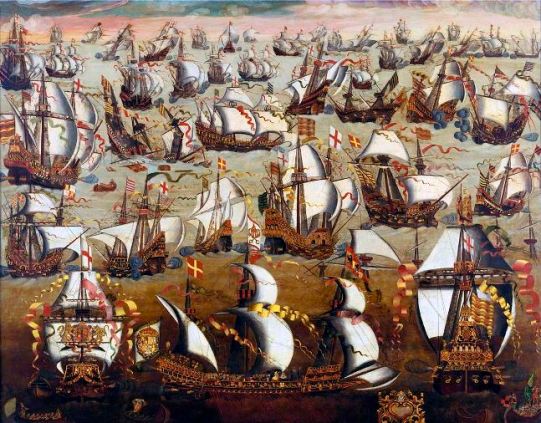 The Spanish Armada and English ships in August 1588, artist unknown

1830 – U.S. Congress passes, and President Andrew Jackson signs into law two days later, the Indian Removal Act; the act authorizes the President to negotiate with southern Native tribes for their removal to territory west of the Mississippi River in exchange for their ancestral lands, but Jackson uses the act to exceed the authority it grants him. He forces the relocation of 46,000 native peoples from their tribal homelands, known as the “Trail of Tears” because so many die from exposure, disease and starvation during forced marches under military compulsion

1858 – Lizzie Black Kander born, American social reformer; working as a truant officer, she is appalled at the living conditions of immigrants, and joins the Milwaukee chapter of the National Council of Jewish Women, which provides classes in sewing, cooking and English to Russian immigrants; Kander founds the Milwaukee Jewish Settlement House, and teaches cooking and nutrition classes there; she compiles The Settlement Cookbook, the sale of which funds the settlement and allows it to move into larger facilities as it grows

1892 – Sierra Club Day * – The Sierra Club is incorporated in San Francisco “to explore, enjoy, and render accessible the mountain regions of the Pacific Coast; to publish authentic information concerning them,” and “to enlist the support and cooperation of the people and government in preserving the forests and other natural features of the Sierra Nevada”

1912 – Ruby Payne-Scott born, Australian physicist and astronomer, the first woman radio astronomer; noted for her work at Australia’s Commonwealth Scientific and Industrial Research Organisation solar bursts; she discovered Type I and Type III bursts, and contributed to work on Type II and IV bursts, and the development of the first radio astronomical interferometer observation 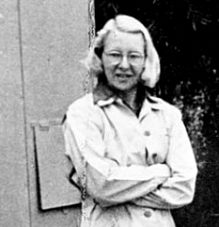 1913 – May Swenson born, American poet, translator and playwright, poet-in-residence for several universities, Chancellor of the Academy of American Poets, recipient of numerous awards and honors

1934 – The Glyndebourne festival in Sussex, England, is inaugurated

1936 – Alan Turing submits “On Computable Numbers” for publication, in which he sets out the theoretical basis for modern computers

1946 – Dame Janet Paraskeva born, British government official; chair of the Child Maintenance and Enforcement Commission (2007-2012); Civil Service commissioner (2006-2007); previously served as a magistrate and member of the Youth Justice Board

1947 – Lynn Johnston born, Canadian cartoonist, known for her comic strip For Better or For Worse; first woman and first Canadian to win the National Cartoonist’s Society’s 1985 Reuben Award for Outstanding Cartoonist of the Year

1961 – Amnesty International Day * – The Observer, a British newspaper, publishes an article called “The Forgotten Prisoners” by the lawyer Peter Benenson; citing the Universal Declaration of Human Rights articles 18 and 19, Benenson announces an “Appeal for Amnesty, 1961” campaign and calls for “common action” – which inspires the founding of Amnesty International, one of the best-known and most-effective human rights organizations in the world

1965 – Mary Coughlan born, Irish politician; served as Teachta Dála (1987-2011), which is a member of Dáil Éireann, the lower house of the Oireachtas (Irish Parliament); where she served on a number of committees, and was appointed several different cabinet positions; she served as Tánaiste (second most-senior officer in the Irish government, from 2009 to 2010)

1991 – Dergue Downfall Day * – In Ethiopia, the Dergue regime falls, after years of disastrous policies, including the ‘Red Terror’ brutal crackdown on opposition groups, holding up international aid during the worst famine in a century, and forced resettlement of opponents in the worst famine areas, resulting in 400,000 starvation deaths. The regime’s leader, Mengistu Haile Mariam, had fled to asylum in Zimbabwe just days before

2008 – The first meeting of the Constituent Assembly of Nepal formally declares Nepal a republic, ending the 240-year reign of the Shah dynasty

2014 – Menstrual Hygiene Day is created by NGO WASH United, a German-based group, with support from over 270 global partners, to end the isolation and shaming of women and girls as “unclean” during their monthly menses

Nona Blyth Cloud has lived and worked in the Los Angeles area for over 50 years, spending much of that time commuting on the 405 Freeway. After Hollywood failed to appreciate her genius for acting and directing, she began a second career managing non-profits, from which she has retired. Nona has now resumed writing whatever comes into her head, instead of reports and pleas for funding. She lives in a small house overrun by books with her wonderful husband.
View all posts by wordcloud9 →
This entry was posted in History, Holidays, On This Day and tagged Alan Turing, Betty Shabazz, Ian Fleming, Jim Thorpe, Lizzie Black Kander, May Swenson, Ruby Payne-Scott. Bookmark the permalink.
Loading Comments...
%d bloggers like this: