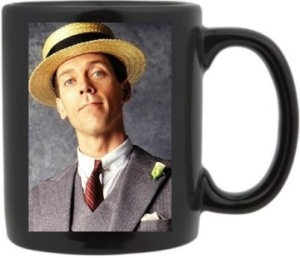 Every man’s work, whether it be literature, or music or pictures or
architecture or anything else, is always a portrait of himself.

I’ve been a big fan of Hugh Laurie ever since Jeeves and Wooster first showed up on Public Television. His transformation from P.G. Wodehouse’s very British Bertie to the irascible American Dr. House showed his chameleon brilliance. But while he played the piano and sang hilariously in Jeeves and Wooster, I had no idea of the depth and breadth of his musical talent.

Nona Blyth Cloud has lived and worked in the Los Angeles area for the past 50 years, spending much of that time commuting on the 405 Freeway. After Hollywood failed to appreciate her genius for acting and directing, she began a second career managing non-profits, from which she has retired. Nona has now resumed writing whatever comes into her head, instead of reports and pleas for funding. She lives in a small house overrun by books with her wonderful husband.
View all posts by wordcloud9 →
This entry was posted in Music, The Coffee Shop and tagged House (TV series), Hugh Laurie, Jeeves and Wooster, Minnie the Moocher, P. G. Wodehouse, Saint James Infirmary, Stephen Fry, Unchain My Heart. Bookmark the permalink.
Loading Comments...
%d bloggers like this: