Switzerland –
Sursee: Cutting of the Goose *

397 –St. Martin, Bishop of Tours, dies on November 8. November 11 is his feast day* Many eat goose on this date, because a honking goose revealed where he was hiding from clergy who wanted to make him Bishop. Old folklore holds that one can stand in the back of a church on Martinmas and see auras around the heads of congregants who will not be living by the next Martinmas 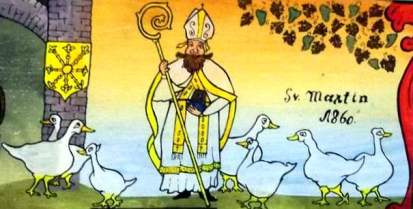 1215 – 4th Lateran Council defines the doctrine of transubstantiation, the belief that bread and wine used in Communion transforms into the body and blood of Christ

1620 – The Mayflower Compact is signed by the male passengers of the Mayflower in what is now Provincetown Harbor near Cape Cod, establishing government based on male majority vote and allegiance to the crown.

1634 – Pressured by Anglican Bishop John Atherton, the Irish House of Commons passes ‘An Act for the Punishment for the Vice of Buggery.’ In 1640, Bishop Atherton and his steward are tried and executed for buggery.

1675 – Gottfried Wilhelm Leibniz, German polymath, demonstrates integral calculus for the first time to find the area under the graph of y=f (x)

1750 – Qing dynasty Ambans, commissioners sent to govern Tibet, are killed in a riot, along with the majority of Han Chinese and Manchus living in Lhasa, after the Tibetan regent is murdered. Qing Troops are sent, and quickly quell the rebellion.

1831 – In Jerusalem, Virginia, Nat Turner is hanged for inciting a violent slave uprising

1839 – The Virginia Military Institute (VMI) is founded in Lexington, Virginia 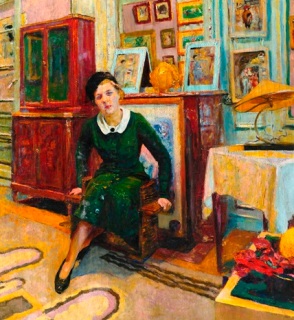 1869 – The colony of Victoria, Australia passes the ‘Aborginal Protection Act’ giving extensive powers to its Board of Protection of Aborigines, including regulation of where they could live and work, and who they could marry.  While the Board did provide institutional care for some children fathered by white men and abandoned by their mothers (often the victims of sexual trafficking or rape), they also removed “half-caste” children, especially girls, from their Aboriginal families, creating the ‘Stolen Generation’

1887 – Four anarchist labor activists are executed for conspiracy to commit murder, even though there was no evidence that any of them were involved in the bombing at Haymarket Square. The ‘Haymarket Riot’ in Chicago’s Haymarket Square began as a peaceful rally supporting workers striking for an 8-hour day and mourning the police killing of six strikers. An unknown person threw a bomb at the policemen trying to disperse the public meeting, and the blast, combined with gunfire, resulted in the death of 7 police officers and at least 4 civilians, while scores of others were wounded

1891 – Grunya Sukhareva born, Soviet child psychiatrist; noted for being the first to publish a detailed description of autistic symptoms in 1925. It was published in German in 1926, and Sula Wolff translated it into English in 1996; Sukhareva founded a Faculty of Pediatric Psychiatry in the Central Institute of Postgraduate Medical Education. In 1938, she led a clinic specializing in childhood psychosis under the Russian SFSR Ministry of Agriculture and Food 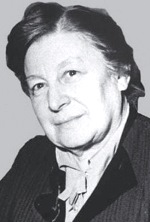 1895 – Wealthy Consuelo Babcock born (Wealthy is her first name, not an adjective), American mathematician; received a master’s in 1922 and a doctorate in 1926, both from the University of Kansas, where she taught for 30 years; the university’s Wealthy Babcock Mathematics Library was named in her honor

1896 – Shirley Graham Du Bois born, African-American author, playwright, composer, and civil and human rights activist; director of the Chicago Negro Unit of the Federal Theatre Project of the WPA; member of Sojourners for Truth and Justice, which worked for global women’s liberation, and the American Communist Party. She married her second husband, W.E.B. Dubois, in 1951, and they emigrated to Ghana, where he died in 1963. After a coup d’état in 1967, she left, and later became a citizen of Tanzania. Noted for There Was Once a Slave, about Frederick Douglass, and Zulu Heart

1914 – Daisy Gatson Bates born, American civil rights activist, publisher, and journalist. She and her husband founded the Arkansas State Press, a statewide weekly newspaper in 1941, which ran civil rights stories on its front page, highlighted achievements of black Arkansans, covered all the Black Arkansas social news, and reported on violations of the Supreme Court’s desegregation rulings. In 1952, Daisy was elected president of the Arkansas Conference of NAACP branches. Because of their newspaper, and because she was the spokesperson for the Arkansas NAACP, during the Little Rock Integration Crisis of 1957, white advertisers withdrew their ads from the paper, and the KKK twice burned large crosses on their front lawn. She was an adviser to the Little Rock Nine, who were harassed by mobs and kept out of Little Rock High School by the Arkansas National Guard, called out by Governor Orval Faubus. According to U.S. Attorney for the Eastern Arkansas District Orso Cobb, “Mrs. Daisy Bates and her charges arrived at the school. . . admitted through one of the less conspicuous entrances. Seconds later, a white female student climbed through a first-story window and yelled that she wasn’t going to school with ‘niggers’. . . television cameras showed a crowd that was calm.  None was visibly armed in any way. . . . some eight agitators known to the Federal Bureau of Investigation . . . were there for no good purpose but to create as much chaos as possible. They had no children in the school; they were provocateurs . . . “Let’s get those niggers out of there.”… The agitators first tried to bully the police into defecting. … Tempers began to rise … The leaders of each assault on the police lines were collared and put into police wagons and taken to jail. More than forty persons were taken into custody. No one in the crowd tried to intervene to prevent the arrests and removal of the troublemakers. No one in the crowd had clubs or weapons of any kind. These two points convinced me that 98 percent of the people there were not part of an organized mob.” “The perseverance of Mrs. Bates and the Little Rock Nine during these turbulent years sent a strong message throughout the South that desegregation worked and the tradition of racial segregation under “Jim Crow” would no longer be tolerated in the United States of America.”

1918 – Józef Piłsudski is appointed Commander in Chief of Polish forces by the Regency Council – he proclaims an independent Polish state, celebrated as Poland’s Independence Day,* and in Austria, Emperor Charles I relinquishes power over both  Austria and Hungary without abdicating, hoping the people would vote to recall him, but after the election, he and his wife eventually go into exile

1919 – Latvians defeat the Freikorps (mostly German mercenaries) at Riga in the Latvian War of Independence, celebrated as Lāčplēša Day *

1921 – U.S. President Harding dedicates the ‘Tomb of the Unknowns’ at Arlington National Cemetery

1926 – The United States Numbered Highway System * is established, coordinated by the American Association of State Highways and Transportation Officials

1926 – Maria Teresa de Filippis born, Italian woman pioneer in auto racing, the first woman to race in Formula One. She was active in 1958-1959, participating in five World Championship Grands Prix

1930 –  Mildred Dresselhaus born, American physicist and academic, known for work on graphite and carbon nanotubes; first woman Institute Professor and professor emerita of physics and electrical engineering at the Massachusetts Institute of Technology. She won numerous awards, including the Presidential Medal of Freedom, the National Medal of Science, the Enrico Fermi Award and the Vannevar Bush Award

1934 – The Shrine of Remembrance in Melbourne, Australia is opened 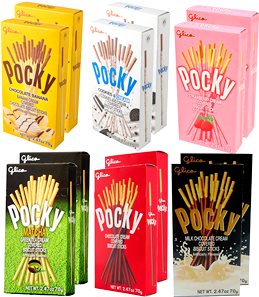 1967 – Vietnam War: In a propaganda ceremony in Phnom Penh, Cambodia, three American prisoners of war are released by the Viet Cong and turned over to “new left” antiwar activist Tom Hayden

1972 – The U.S. Army turns over its base at Long Binh to the South Vietnamese army, symbolizing the end of direct U.S. military involvement in the Vietnam War

1980 – The Friends of The Origami Center of America (now OrigamiUSA) is founded, sponsors of World Origami Day

1984 – The USS Ohio, the first Trident class submarine, is commissioned 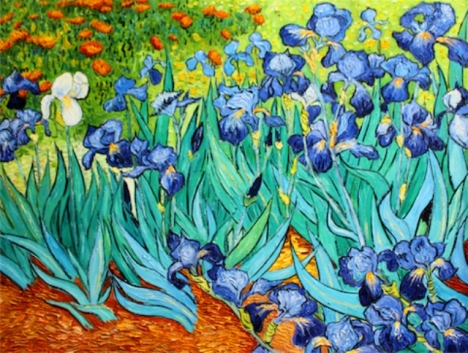 1993 – A sculpture honoring American women who served in the Vietnam War is dedicated at the Vietnam Veterans Memorial in Washington, D.C.

2004 – New Zealand Tomb of the Unknown Warrior is dedicated at the National War Memorial, Wellington

2013 – Malala Yousafzai’s memoir, I Am Malala, is an international best-seller, but it has been banned private schools in Pakistan, her home country. School administrators complain that the book degrades Islam and that its teenage author acted like a “propaganda tool of the West”

Nona Blyth Cloud has lived and worked in the Los Angeles area for the past 50 years, spending much of that time commuting on the 405 Freeway. After Hollywood failed to appreciate her genius for acting and directing, she began a second career managing non-profits, from which she has retired. Nona has now resumed writing whatever comes into her head, instead of reports and pleas for funding. She lives in a small house overrun by books with her wonderful husband.
View all posts by wordcloud9 →
This entry was posted in History, Holidays, On This Day and tagged Abigail Adams, Daisy Gatson Bates, Kurt Vonnegut, Leó Sziláed, Malala Yousafzai, Mildred Dresselhaus, Paracelsus. Bookmark the permalink.
%d bloggers like this: