International Day for the Elimination of Violence Against Women *

1075 – Emperor Taizong of Jin born, (Reign 1123-1135), second emperor of the Jin dynasty, who waged war against the Song dynasty, expanding his control to cover most of northern China 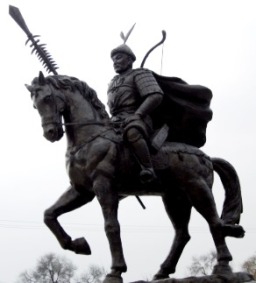 1120 – The White Ship sinks in the English Channel, drowning William Adelin, only legitimate son and heir of King Henry I of England, and his half-siblings Matilda and Richard. William Adelin’s death leads to a succession crisis and civil war in England known as ‘The Anarchy’ 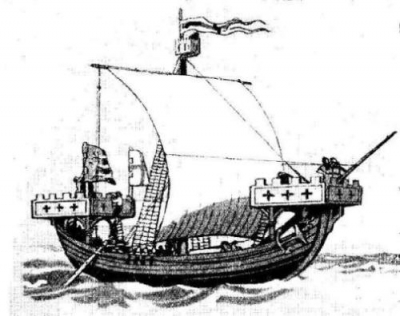 1454 – Queen Catherine Cornaro born, last monarch of the Kingdom of Cyprus (reign 1474-1489); she had no heir, so she was pressured into ceding her rights as ruler of Cyprus to the Doge of Venice

Portrait of Caterina Coronaro, by Titian

1491 – The siege of Granada, the last Moorish stronghold in Spain, ends with the Treaty of Granada, which provided a short truce, and guaranteed a set of rights to the Moors, including religious tolerance and fair treatment in return for their surrender and capitulation – but the subsequent Catholic policy inviting them to convert or be expelled triggered the Moorish uprising of 1500

1715 – Sybilla Thomas Masters, American inventor, becomes the first American colonist to be granted an English patent (under her husband’s name), for cleaning and curing maize (Indian corn): Letters patent to Thomas Masters, of Pennsylvania, Planter, his Execrs., Amrs. and Assignees, of the sole Vse and Benefit of ‘A new Invention found out by Sybilla, his wife, for cleaning and curing the Indian Corn, growing in the several Colonies of America, within England, Wales, and Town of Berwick upon Tweed, and the Colonies of America.’

1778 – Mary Anne Schimmelpennick born, British author and abolitionist; ‘Narrative of the Demolition of the Monastery of Port Royal des Champs’ and ‘Theory on the Classification of Beauty and Deformity’

1783 – The last British troops leave from New York, three months after the signing of the Treaty of Paris ends the American Revolutionary War 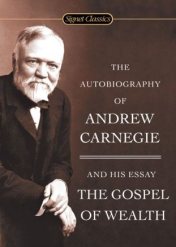 1865 – Kate Gleason born, first woman enrolled to study engineering at Cornell University, first woman elected to full membership in the American Society of Mechanical Engineers, philanthropist and suffragist, friend of Susan B. Anthony; left much of her estate for libraries and parks in her hometown of Rochester NY, and to the Rochester Institute of Technology, which named its college of engineering for her 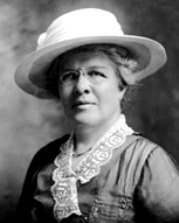 1867 – Talaat Harb born, leading Egyptian economist; founder of the Banque Misr (The Bank of Egypt), and its group of companies in 1920 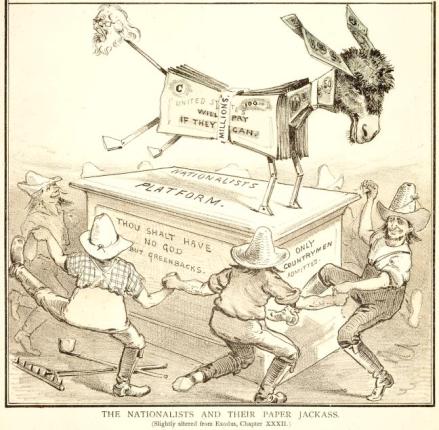 1876 – In retaliation for the U.S. Army defeat at the Battle of the Little Bighorn, troops sent by General George Crook sack the sleeping Cheyenne village of ‘Morning Star’ (Chief Dull Knife) at the headwaters of the Powder River, scattering their horses,  burning everything in the village, and killing 40 Cheyenne. That night, when the temperature plunges to 30 below zero, 11 babies freeze to death

1880 – Elsie Oxenham, born Elsie J. Dunkerly, author of books for girls and young women, who published 87 titles, 38 of them in her Abbey series

1895 – Helen Hooven Santmyer born, American novelist and librarian; active in the struggle for women’s rights as a Wellesley student; earned a B.Litt. degree from Oxford University for her thesis on 17th century women writers, and wrote poetry and two novels, but then focused on earning a living, in positions as an educator and librarian until her retirement in 1959; best known for “…And Ladies of the Club”  first published in 1982, when she was 86, then picked up and republished in 1984 by Putnam, when it became a best-seller; she died in 1986, at 90 years of age

1896 – Virgil Thomson born, one of the pioneers of the ‘American Sound’ in orchestral music, awarded a National Medal of Arts (1988)

1900 – Helen Gahagen Douglas born, actor, politician; first woman Democrat elected as a U.S. Congressional representative from California (1944-1950). She ran against Richard Nixon for Senate in 1950, who claimed she was “pink down to her underwear,” termed worst the “red-smear” campaign in American politics; Gahagan Douglas coined the nickname “Tricky Dick” for Nixon

1906 – Alice Ambrose born, American philosopher, logician and author; professor at Smith College (1937-1972 when she became Professor Emeritus); editor of the Journal of Symbolic Logic (1953-1968), and co-author with her husband, Morris Lazerowitz, of  Fundamentals of Symbolic Logic, and several other works

1916 – Peg Lynch born, American actress and producer-scriptwriter; the first woman to create, write, own and star in her own radio and television sitcoms, Ethel and Albert, The Couple Next Door and The Little Things in Life, retaining ownership throughout her life, and writing nearly 11,000 scripts

1924 – Sybil Bailey Stockdale born, became an activist when her husband, a U.S. Navy pilot, became a prisoner of war during Vietnam, and spent 7-1/2 years under torture as a POW in North Vietnam. She co-founded the National League of Families, a nonprofit organization working on behalf of the families of Missing in Action and POW members of the U.S. military; awarded the Navy Distinguished Public Service Award, the highest honor given by the U.S. Department of the Navy to a civilian who is not an employee of
the department

1929 – Judy Crichton born as Judith Feiner, American television news and documentary producer; the first woman producer for CBS Reports, where she produced “The Nuclear Battlefield,” which won three Emmy Awards; moving to ABC Close-Up, she produced the award-winning Oh, Tell the World What Happened, and a profile of Franklin Delano Roosevelt; executive producer of American Experience  (1987-1996), winning 6 Peabody Awards, and 7 Emmy Awards. President Clinton presented her with the National Humanities Medal in 2000

1936 – In Berlin, Germany and Japan sign the Anti-Comintern Pact, agreeing to consult on measures “to safeguard their common interests” in event of an unprovoked attack by the Soviet Union against either nation

1936 – Phoebe S. Leboy born, American biochemist and advocate for women in science; her work on nucleic acid modifications and bone-forming adult stem cells placed her at the forefront of epigenetics and regenerative medicine

1947 – Movie studio executives meeting in New York agree to blacklist the “Hollywood 10,” who were cited a day earlier and jailed for contempt of Congress when they failed to cooperate with the House Un-American Activities Committee

1950 – Alexis Wright born, Indigenous Australian author and land rights activist of the Waanyi people; noted for her novels, Plains of Promise, and Carpentaria, which won the Miles Franklin Award, and for Tracker, her “collective memoir” of Aboriginal activist Leigh Bruce “Tracker” Tilmouth, which won the 2018 Stella Prize

1952 – Agatha Christie’s murder-mystery play The Mousetrap opens at the Ambassadors Theatre in London, beginning the longest continuous run of a play in theatre history

1955 – Connie Palmen born, Dutch author; noted for her novels De wetten (The Laws), De vriendschap (The Friendship), and Jij zegt het (If You Say So), winner of 2016 Libris Prize

1958 – Naomi Oreskes born, American science historian; Professor of the History of Science at Harvard University since 2013

1960 – “Las Mariposas” (the butterflies) – three of the four Mirabal sisters, Patria, Minerva and Maria Teresa, leaders of the Movement of the 14th of June opposing Dominican dictator Rafael Trujillo’s regime are assassinated, making them martyrs to both the populist and feminist causes. (See 1999 entry below)

1973 – Greek President George Papadopoulos is ousted in a military coup

1975 – Republic of Suriname gains its independence from the Netherlands

1984 – Thirty-six top musicians gather in a Nottinghill studio and record Band Aid’s “Do They Know It’s Christmas?” in order to raise money for famine relief in Ethiopia

1998 – Britain’s highest court rules that former Chilean dictator Augusto Pinochet, whose extradition is being sought by Spain, cannot claim immunity from prosecution for the crimes he committed during his rule

1999 – The U.N. General Assembly recognizes and supports a campaign started in the Dominican Republic to honor the three Mirabal sisters, who were political activists  ordered killed by dictator Rafael Trujillo in 1960, which has grown into an international campaign to stop violence against women. The General Assembly designates November 25 as International Day for the Elimination of Violence Against Women, *  the first of the U.N. campaign “16 Days of Activism” leading up to Human Rights Day 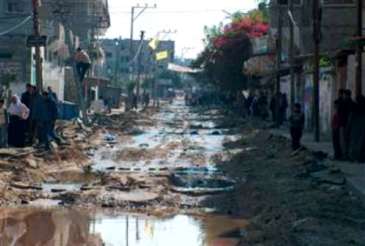 2010 – In Tonga, voters go to the polls in the first general election in the nation’s history in which the majority of parliament will be popularly elected

Nona Blyth Cloud has lived and worked in the Los Angeles area for the past 50 years, spending much of that time commuting on the 405 Freeway. After Hollywood failed to appreciate her genius for acting and directing, she began a second career managing non-profits, from which she has retired. Nona has now resumed writing whatever comes into her head, instead of reports and pleas for funding. She lives in a small house overrun by books with her wonderful husband.
View all posts by wordcloud9 →
This entry was posted in History, Holidays, On This Day and tagged Giuseppe Giovanni Battista Guarneri, Kate Gleason, Peg Lynch, Samiha Ayverdi, Servius Tullius, Talaat Harb, The Mirabal Sisters. Bookmark the permalink.