The son of a Presbyterian minister and biblical scholar who took the family on frequent research trips to Europe, young Jeffers attended boarding schools in Germany and Switzerland. His father made sure he got thorough training in classical languages and the Bible. He began his undergraduate studies at Western University of Pennsylvania and finished them at Occidental College in Southern California, where he graduated at the age of 18.

In the fall of 1905, he began graduate school at the University of Southern California with a somewhat vague focus on language study: Spanish, Old English, Oratory and Advanced German. It was in his German class that he met Una Call Kuster, the 21-year-old wife of an ambitious young attorney, who “indulged” her desire to complete her college degree, interrupted when she married him at age 18, as long as it didn’t interfere with the social engagements that helped advance his career.

As classmates, ‘Robin’ and Una began a friendship that ultimately turned into an on-again off-again love affair, while they both struggled to ‘do the decent thing’ – she, to save her marriage, and he, to let her go because he couldn’t support a wife. He restlessly pursued studies in Philosophy, Old English, Dante, and Spanish Romance Poetry at the University of Zurich, then returned to UCLA for Medical School, but switched again, this time to Forestry at the University of Washington.

In 1912, two things changed: Jeffers came into a family inheritance; and during a trial separation from Una, Ted Kuster met sixteen year old Edith Emmons, daughter of another attorney, and fell in love.

Jeffers self-published his first collection of poetry, Flagons and Apples, and sent a copy to Una with a love note. In spite of the scandal still attached to divorce in the pre-WWI years, the Kuster’s divorce became final on August 1, 1913 – both sets of lovers were married on the following day. 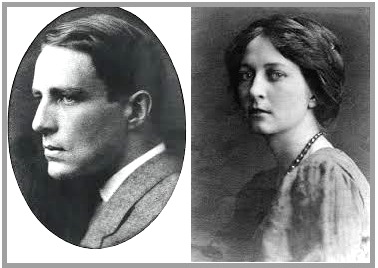 In 1914, the newly-married couple came to Carmel, California. Jeffers wrote of their first sight of a promontory overlooking the sea, “The breath of the morning hung in the pines, and this we felt was our home. . . .”

I am heaping the bones of the old mother
To build us a hold against the host of the air;
Granite the blood-heat of her youth
Held molten in hot darkness against the heart
Hardened to temper under the feet
Of the ocean cavalry that are maned with snow
And march from the remotest west.
This is the primitive rock, here in the wet
Quarry under the shadow of waves
Whose hollows mouthed the dawn; little house each stone
Baptized from that abysmal font
The sea and the secret earth gave bonds to affirm you. 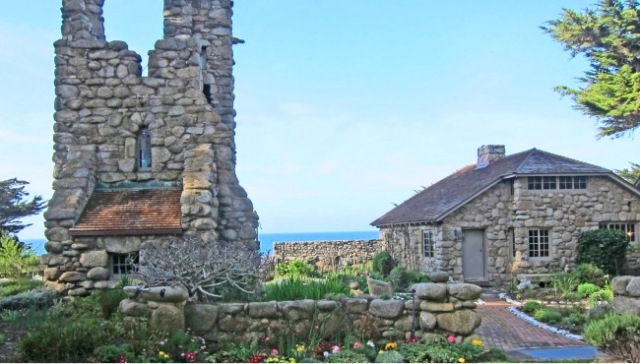 They contracted with a local builder for a one-bedroom stone cottage, and Jeffers became the stone mason’s informal apprentice. While the cottage, called Tor House, was completed in just a few months, he spent four years working alone on his next project – the four-story rough stone Hawk Tower. He usually wrote in the morning and built in the afternoons. By 1924, the tower was completed, and so was his book of poetry, Tamar and Other Poems. Tamar is a very long narrative poem, but the opening of the following poem shows he was still using more traditional formats, such as this A-B-A-B rhyme scheme, during this period than we saw in the previous poem, To the House, which was written later.

Peace now for every fury has had her day,
Their natural make is moribund, they cease,
They carry the inward seeds of quick decay,
Build breakwaters for storm but build on peace.
The mountains’ peace answers the peace of the stars,
Our petulances are cracked against their term.
God built our peace and plastered it with wars,
Those frescoes fade, flake off, peace remains firm.
In the beginning before light began
We lay or fluttered blind in burdened wombs,
And like that first so is the last of man,
When under death for husband the amorous tombs
Are covered and conceived; nine months go by
No midwife called, nine years no baby’s cry.

After getting little attention, a belated favorable review from an influential critic made the book his first success. By 1932, he was on the cover of Time, and in 1946, his modern version of the Greek tragedy Medea was being played on Broadway by Judith Anderson.

It was this play that was my introduction to Robinson Jeffers. Most translations of the ancient Greek plays are made by scholars more concerned over technicalities than theatricality, resulting in dull, unconvincing dialogue. Few theatre companies will attempt to perform such dry stuff. The Jeffers version is full of fire, stripped of any choral sections recounting myths only marginally connected to the story. Less accurate, but much more playable for actors, and exciting for modern audiences. To Jason’s anguished question, why did she murder the children, Medea’s chilling reply is, “Because I loathed you more than I loved them.”

But the 1940s were also when his popularity waned. He condemned America’s imperial ambitions, and was against WWII, almost as critical of the Allies as he was of the Axis powers. Not a popular stance during the ‘Good War.’ He also espoused a philosophy of inhumanity, suggesting that people were detrimental to the Earth, and spurned by an uncaring God, they would eventually become extinct, leaving the planet to heal in a return to Nature.
__________________________________

Consider greatness.
A great man must have a following, whether he gain it
Like Roosevelt by good intentions, cajolery and bribes, or Hitler
. . . . . . . . . . . . . . . . . . . . . . . . . . .by fanatic
Patriotism, frank lies, brutality and terror,
Without great following no greatness, it is ever the greedy
Flame on a wick dipped in the fat of millions;
No man standing alone has ever been great;
Except, most rarely, his will, passion or intellect
Have come to posthumous power and the naked spirit
Picked up a crown.
. . . . . . . . . . . . . . . . . . . . . . . .Yes.   Alas then, poor ghost,
Out of joint with time, hermit, martyr, starved prophet,
Were you honest while you lived?  You are not now.
You have found your following and it corrupts you; all greatness
Involves betrayal, of the people by a man
Or of a man by the people. Better to have stood
Forever alone.  Better been mute as a fish,
Or an old stone on the mountain, where no man comes,
But only the wilderness-eyeing hawk with her catch
And feeds in peace, delicately, with little beakfuls,
While far down the long slope gleams the pale sea. 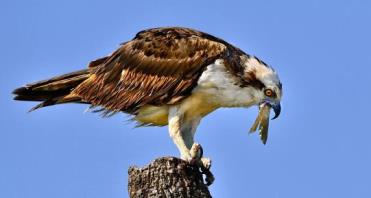 Five planets and a brilliant young moon
Reach like a golden ladder from the saffron-lined sea-rim
High up the dark blue dome of heaven.
Today we saw the first flush of wild-flowers, glad was our hillside
With yellow violets and blue-eyed grass.
This beautiful day dying in such splendor is the tenth of March,
Nineteen forty; Finland today
After all her winter valor and the great war in the snow
Is beaten down by machines and multitude.
It will be long before the moon and five planets meet again;
And bitter things will have happened; not worse things. 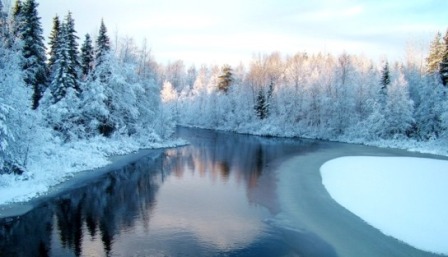 The mad girl with the staring eyes and long white fingers
Hooked in the stones of the wall,
The storm-wrack hair and screeching mouth: does it matter, Cassandra,
Whether the people believe
Your bitter fountain? Truly men hate the truth, they’d liefer
Meet a tiger on the road.
Therefore the poets honey their truth with lying; but religion—
Vendors and political men
Pour from the barrel, new lies on the old, and are praised for kindly
Wisdom. Poor bitch be wise.
No: you’ll still mumble in a corner a crust of truth, to men
And gods disgusting—you and I, Cassandra. 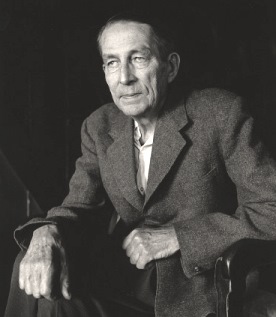 In the late 1960s, young people concerned about the environment and overpopulation discovered the poetry of Robinson Jeffers, and his work began to be re-published. The promontory with his house and the tower he built became a place of pilgrimage. When developers wanted to tear it down in the late 1970s, a non-profit foundation was formed to save the property, now affiliated with the National Trust for Historic Preservation.

The extraordinary patience of things!
This beautiful place defaced with a crop of surburban houses–
How beautiful when we first beheld it,
Unbroken field of poppy and lupin walled with clean cliffs;
No intrusion but two or three horses pasturing,
Or a few milch cows rubbing their flanks on the outcrop rockheads–
Now the spoiler has come: does it care?
Not faintly. It has all time. It knows the people are a tide
That swells and in time will ebb, and all
Their works dissolve. Meanwhile the image of the pristine beauty
Lives in the very grain of the granite,
Safe as the endless ocean that climbs our cliff.–As for us:
We must uncenter our minds from ourselves;
We must unhumanize our views a little, and become confident
As the rock and ocean that we were made from. 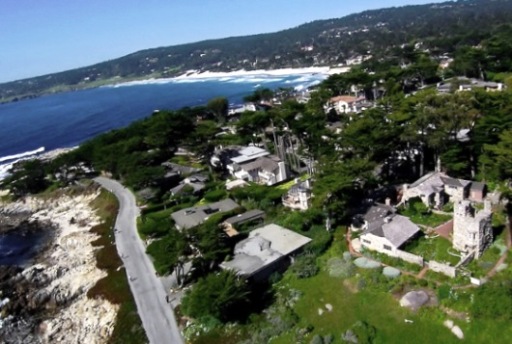 So the restless young man who became the admired poet courted by Fame, then was spurned for his prophetic vision, is back in favor in the literary world, and now with enthusiasts in the environmental movement. I hope that he escapes the fate of the Great Men of his poem, remaining instead the honored stone- and word- mason of his beautiful place in the world.

Nona Blyth Cloud has lived and worked in the Los Angeles area for the past 50 years, spending much of that time commuting on the 405 Freeway. After Hollywood failed to appreciate her genius for acting and directing, she began a second career managing non-profits, from which she has retired. Nona has now resumed writing whatever comes into her head, instead of reports and pleas for funding. She lives in a small house overrun by books with her wonderful husband.
View all posts by wordcloud9 →
This entry was posted in Poetry, Word Cloud and tagged Carmel California, Environmentalist, Medea, Monterrey Cypress, Robinson Jeffers, Stonecrafter, Tor House and Hawk Tower, Una Call Kuster. Bookmark the permalink.