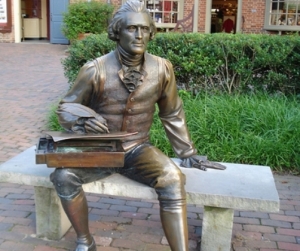 1786 – The Virginia Statute for Religious Freedom, written by Thomas Jefferson, was signed January 16, 1786, and is commemorated each year on National Religious Freedom Day. Thomas Jefferson’s landmark statute became the basis for Congressman Fisher Ames’ establishment clause of the First Amendment of the U.S. Constitution: “Congress shall make no law respecting an establishment of religion, or prohibiting the free exercise thereof…”

All of the world’s current major religions have been founded by men, and there has been a definite bias against women reaching positions of authority within their hierarchies. Since the United States of America from its founding has proclaimed religious freedom for all, it is not surprising that America has been home to a number of women who founded their own religious groups, with varying degrees of success:

Mother Ann Lee and the Shakers in America

One of the earliest and most notable of these women founders was Mother Ann Lee (1736-1784), an Englishwoman who started the United Society of Believers in Christ’s Second Appearing (more commonly known as the ‘Shakers’) while she was still in England. She went to America, attempting to escape religious persecution.

She was born in Manchester, England, into a poor family who were members of the Society of Friends, the second of eight children. She worked from a young age in a cotton factory, then as a cutter of hatter’s fur, and as a cook in an infirmary. At age 22, she joined the Wardley Society, an English Quaker offshoot founded by Jane and James Wardley, who taught that shaking and trembling were the result of sins being purged from the body by the Holy Spirit, purifying the worshiper.

Ann Lee was repulsed by sexual behavior, and wanted to remain single, but her father finally forced her to marry Abraham Stanley in 1761, when she was 25 years old. She suffered through four difficult pregnancies. The babies all died in infancy.

Lee developed radical religious beliefs in celibacy, abandonment of marriage, and the importance of pursuing perfection in every facet of life. She began to preach, speaking of visions and messages from God which showed her that the only true road to salvation was through celibacy, renunciation of all “lustful gratifications” and confession of sin. She declared this was the only way that the Kingdom of God could be established on Earth. Lee urged other believers to testify more publicly concerning the imminent second coming of Christ, and to boldly speak out against sin. Though the Quakers espoused gender equality, she went further, and denounced sexual relations even in marriage. Lee was frequently arrested for breaking the Sabbath by “dancing” and shouting, and charged with blasphemy. By 1770, the sect had accorded her the title “Mother in spiritual things,” and some witnesses claimed that Mother Ann performed miracles, including healing the sick.

After multiple arrests and stays in prison, in 1774 another revelation led her to take a select band of followers to America, including her husband, but he deserted her soon after their arrival. Among her loyal followers were her brother William, her niece Nancy, James Whittaker, James Shepherd, Mary Partington, and John Hocknell, who paid for the voyage, bringing his son Richard with him. They arrived in New York City on August 6, 1774, and stayed there, pooling their resources from whatever work they could find, for nearly five years.

During the American Revolution, Mother Ann and her followers declared themselves pacifists, and maintained their neutrality, not siding with the British or the colonists.

In 1779, John Hocknell leased land at Niskayuna, in the township of Watervliet, near Albany, New York, where this small group of Believers settled and built their unique community, too busy at first building shelter and growing food to get much notice from their neighbors.

Following an overnight thunderstorm, on the “Dark Day” of May 19, 1780, a combination of smoke from forest fires, thick cloud cover and heavy fog blackened the skies of New England. It was so dark, candles had to be lit at noon. Because the Book of Revelation prophesied darkness as a sign of the end of the world, churchgoers feared that God was angry with his sinful people, and the Day of Judgment was upon them. It was an auspicious day for Mother Ann Lee to begin her testimony to the people of the world.

A number of people who had come in 1779 to the Protestant ‘New Light’ revival meetings at New Lebanon, New York, led by four women having visions, were now inspired by her preaching to become followers of Mother Ann. Word of a powerful new preacher began to spread.

Between 1780 and 1783, in spite of some time spent in jail because she was accused of spying for England, Ann Lee and a few devoted followers traveled New England recruiting converts, and sending a number of them back to work the farm at Niskayuna. Her visions and revelations also led to accusations that she was a witch – Mother Ann began her recruitment tour less than 90 years after the infamous Salem Witch Trials in Massachusetts. Shakers, including Mother Ann, were stripped and beaten for heresy by mobs in one than one town, while in other places, they established new enclaves of Believers in Christ’s Second Appearing.

Many early Believers joined as family groups, some as large as 20 or 30 people. Living together as brothers and sisters, they worked hard, building communities with pooled land and labor. They also took in orphans. By the time of Ann Lee’s death in 1784, there were close to a 1,000 Shaker converts.

In 1787, the Shaker Ministry used donations of money and land to gather widely scattered Believers into new Shaker communities, where the first order of business was building the Meetinghouse. Each Meetinghouse had separate but identical entrances for women and men, and wide-open floors with no pews or posts to interfere with their ecstatic worship. The new housing they built for the brothers and sisters also had separate stairways and quarters to further segregate the sexes.

In 1788, Joseph Meacham, who became the new leader after Ann Lee’s death, had a revelation that they should practice “a Perfect Equality for both man & woman in Every Lot of Church Relation & in all Rights & Privileges in the Church.” He asked Lucy Wright to be his partner in leading the church, and together they institutionalized a gender-balanced administration, structuring church government to be led by two Eldresses and two Elders, with two teams of Eldresses and Elders running each Shaker ‘village’ – communities of up to 600 adults and children. Larger communities were subdivided into an upper ‘Church Family’ for members who had signed the covenant and turned over their property, and a lower ‘Gathering’ or ‘Novitiate’ order, for those who had not yet made a commitment, or were less advanced in the faith.

All property was held in common, and the communities had to be self-supporting, so everyone labored from dawn until 8 PM, six days a week. Then there were evening meetings for supervised socializing, singing or worship. Every waking moment was planned to keep them busy, preventing “idle hands,” known to make the devil’s work.  Anyone shirking their share of labor was reprimanded, and either worked harder or soon left. The hard work resulted in well-maintained communities. They prospered, and sometimes had surplus crops for selling or trading with their neighbors. 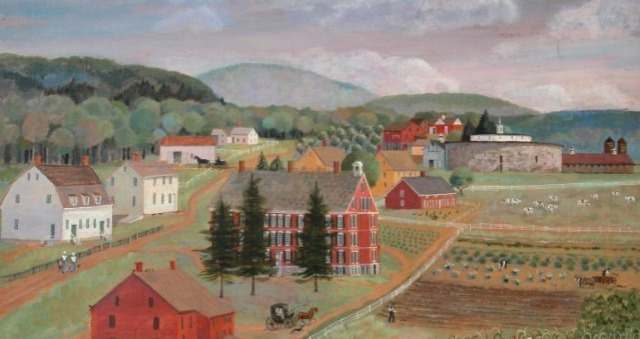 The Shakers were also innovators, credited with a long list of inventions, including the flat broom, the screw propeller, a pea sheller, a threshing machine, the metal pin, an apple parer and corer, a turbine water wheel, a revolving oven, the circular saw, the common clothespin, and an industrial washing machine. These inventions were rarely patented, so many people today are unaware that Shaker ingenuity is the source of so many useful tools and machinery in everyday use now.

Shaker tool for threading pegs, so they can be screwed into a backboard

But after John Meacham died in 1796, and Lucy Wright became the head of the Shaker Ministry, although she did have a new male counterpart, she was the senior leader, so about a quarter of the Society’s young men objected to “petticoat government” and left. Wright remained the primary Shaker leader until her death in 1821, proving herself an able administrator, but lacking Mother Lee’s charisma. Under her leadership, Shaker book and tract publications were standardized and more widely distributed, including Testimony of Christ’s Second Appearing (1810), and the Hymnal (1813).

The Shaker movement reached its height by the early 1840s, with over 5,000 members. But soon after that, membership began to decline, especially among young men.

However, Shaker-raised girls almost always remained Shakers. The Society not only offered them good food, lodging, lifetime support, medical care, and a path to salvation, they also had unique opportunities to become community leaders, as Eldresses and Deaconesses. Even if they had no ambition to be leaders, the work of Shaker women was overseen by women leaders, so Shaker sisters never worked for male bosses. This made Shakerism more attractive to women converts than to men. It was a real alternative to marriages in the outside world where a husband would have all the legal rights and the wife was legally regarded as if she were his appendage. But fewer new converts joined, and older Believers began to die off, so the Society’s numbers continued to shrink slowly.

The rest of American women began to see the fight for their rights become legislation, beginning with the Married Women’s Property Acts which were first enacted in individual states in the 1830s, then continued, albeit with much foot-dragging, to be passed and expanded from 1840s through 1890s. For women raised in the outer society, this made taking the drastic steps of foregoing having children of their own and giving up whatever property they might have in order to become Shaker converts seem less attractive than it had been when Mother Ann held audiences spellbound.

The Sabbathday Lake village in Maine is the last remaining Shaker Community, with only two elderly members remaining by 2017. The entire property has been a National Historic Landmark since 1974. Many of the other Shaker communities have become museums, showcasing the exceptional Shaker craftsmanship, and their “Hands to Work, Hearts to God” philosophy.

Section of the Shaker Village at Sabbathday Lake, Maine

Though the faith founded by Mother Ann Lee was doomed to die out, Shaker music, culture and high standards of workmanship have continued to influence artists, craftspersons, and students of religion and philosophy in the 20th and 21st centuries, and it remains an important chapter in the history of Religious Freedom in America.

Nona Blyth Cloud has lived and worked in the Los Angeles area for the past 50 years, spending much of that time commuting on the 405 Freeway. After Hollywood failed to appreciate her genius for acting and directing, she began a second career managing non-profits, from which she has retired. Nona has now resumed writing whatever comes into her head, instead of reports and pleas for funding. She lives in a small house overrun by books with her wonderful husband.
View all posts by wordcloud9 →
This entry was posted in American History, Religion and tagged Joseph Meacham, Lucy Wright, Mother Ann Lee, National Religious Freedom Day, The Shakers, Thomas Jefferson, United Society of Believers in Christ’s Second Appearing, Women Religious Leaders. Bookmark the permalink.