748 – Abbasid Revolution: Hashimi rebels under Abu Muslim Khorasani take Merv, capital of the Umayyad province Khorasan, and a major oasis-city on the historical Silk Road. Abu Muslim became the de facto governor of Khorasan, using it as a base to the consolidate the Abbasid revolt against the Umayyad Caliphate

842 – Charles the Bald and Louis the German swear the Oaths of Strasbourg, mutual pledges of allegiance, in French and German 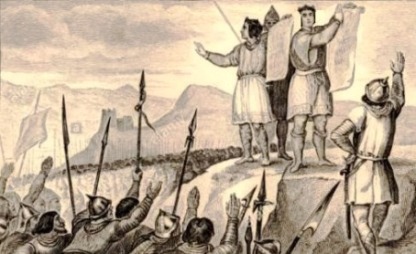 1400 – Richard II of England dies, most probably from starvation, in Pontefract Castle, on the orders of Henry Bolingbroke

1502 – The Catholic Monarchs, Queen Isabella I of Castile and King Ferdinand II of Aragon, issue a decree that Muslims in Granada refusing to convert to Catholicism must leave Spain 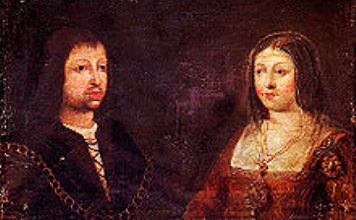 Wedding portrait of the Catholic Monarchs,  Ferdinand and Isabella 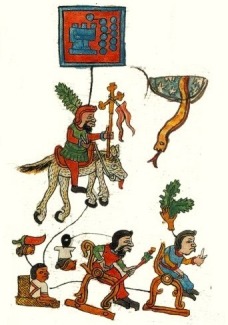 1556 – The Coronation of Jalal-ud-din Muhammad Akbar, also called Akbar the Great, as the third Badshah (Emperor) of the Mughal Empire. He reigned from 1556 to 1605, enlarging the empire to include nearly all of the Indian Subcontinent north of the Godavari River, using a policy of conciliating conquered rulers through marriage and diplomacy, while establishing a centralized administrative system

1556 – During the reign of Roman Catholic Queen Mary I of England, who succeeded her Protestant brother Edward VI, the Archbishop of Canterbury, Thomas Cranmer, is declared a heretic and degraded from holy orders; he is later burned at the stake

1655 – The Mapuche under Clentaru, their elected military leader, rise up in insurrection against the Spanish (in today’s central Chile)

1760 – Richard Allen born as a slave, teaches himself to read and write; allowed by his master, a Methodist, to work odd jobs for pay so he can buy his freedom in 1777; he becomes a Methodist preacher in 1784, but leaves the church over its segregationist policies; co-founder with Absalom Jones of the Free African Society, a non-denominational mutual aid society in 1787; operates an Underground Railroad station, helping escaped slaves (1797-1831); founder of the African Methodist Episcopal Church in 1816

1779 – After British Royal Navy Captain James Cook tries to deal with aggressive hostility from Hawaiian Islanders at Kealakekua Bay by taking Kalani’ōpu’u, the King of Hawai’i, the captain and 4 of his marines are killed by villagers to stop the kidnapping of their ruler

1803 – Moses Coates received a patent for the apple parer

1804 – Karađorđe leads the First Serbian Uprising against the Ottoman Empire

1818 – Frederick Douglass born as a slave (he chose this day as his birthday, the exact date was unrecorded), escapes in 1838, and becomes an abolitionist leader and outstanding orator; author (his autobiography went through nine reprints in the first three years after publication); editor of The North Star, a major anti-slavery newspaper; and supporter of women’s suffrage 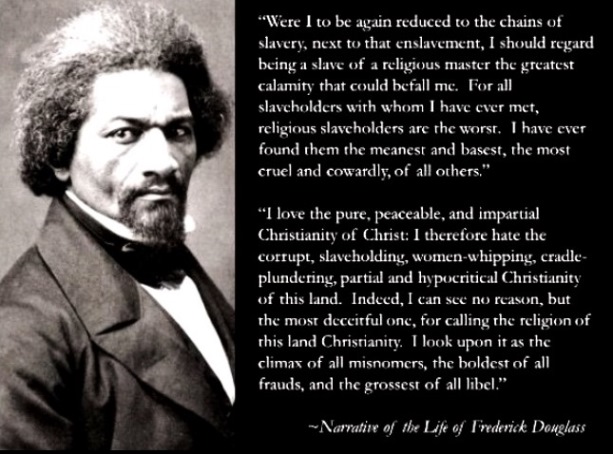 1819 – Christopher Sholes born, American newspaper publisher and inventor who developed the QWERTY keyboard for the typewriter

1829 – Solomon G. Brown born, works for Samuel Morse, helps to install the first Morse telegraph; becomes the first African American employee of the Smithsonian in 1852, and works his way up from laborer to a registrar in charge of transportation, receiving materials, and overseeing storage of animal specimens, for 54 years; Member of the House of Delegates for the District of Columbia (1871-1874)

1838 – Margaret E. Knight, American inventor; held 27 patents, including one for a machine to fold and glue paper bags with flat bottoms, a new valve sleeve for an automobile engine, and six patents for machines used in manufacturing shoes. She did not make much money from her inventions because, as an unmarried self-supporting working-class woman, she was not able to wait for royalties, but had to sell the rights to her inventions outright 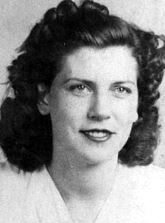 1847 – Anna Howard Shaw born, America minister and physician, one of the first U.S. women ordained as a Methodist minister, and one of the most influential leaders of the women’s suffrage movement and the temperance movement. She helped broker a reconciliation in 1890 between the National Woman Suffrage Association and the American Equal Rights Association, which had split in 1869 over whether or not to support the 15th Amendment to the U.S. Constitution.  Shaw became president of the National American Woman Suffrage Association (NAWSA) after the two groups merged, and focused on securing a national constitutional amendment granting women the right to vote. She resigned as NAWSA president in 1915 because she opposed the militant tactics being employed by younger NAWSA members Alice Paul and Lucy Burns, such as picketing the White House. Carrie Chapman Catt took over as NAWSA president. For Shaw’s service as head of the Women’s Committee of the U.S. Council of National Defense during WWI, she became the first woman awarded the Distinguished Service Medal, for exceptionally meritorious service to the government in a duty of great responsibility related to the U.S. military. In a speech shortly before her death in 1919 she said that “the only way to refute” the argument that America was a democracy and therefore American women were entitled to vote was “to prove that women are not people.”

1849 – The first photograph of a serving U.S. President is taken by Matthew Brady of President James Polk

1870 – Esther Hobart Morris begins her tenure as the first female U.S. Justice of the Peace – ironically, she’s appointed to replace a judge resigning in protest over Wyoming’s passage of the women’s suffrage amendment to its state constitution in December 1869 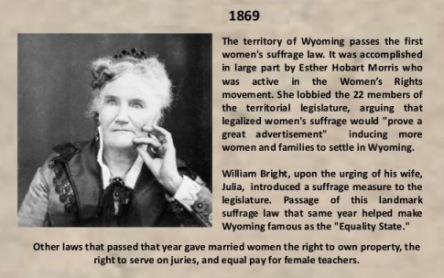 1874 – Charlotta A. Spears Bass born, newspaper publisher and civil rights activist, works for the California Eagle newspaper in Los Angeles (1904-1951), taking over after the owner/editor dies – by 1925 it is the West Coast’s largest Black newspaper, circulation 60,000; first African American woman U.S. Vice Presidential candidate when the Progressive Party chooses her as their nominee

1889 – California Oranges Day * – in Los Angeles, the first shipment of California oranges are put in special cooled railroad cars for transport to the Eastern U.S. 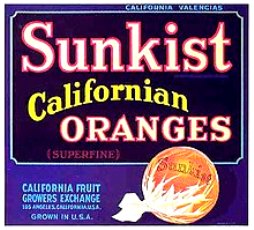 1890 – Nina Hamnett born, Welsh painter, writer and expert on sea chanteys, dubbed ‘Queen of Bohemia’ for her flamboyantly open bisexual life as part of London’s artistic and literary community, centered in an area near the West End called Fitzrovia, named for the Fitzroy Tavern which was a popular gathering place. Noted for her memoir, Laughing Torso, published in 1932

1895 – Oscar Wilde’s final play, The Importance of Being Earnest, opens in London at the St. James Theatre 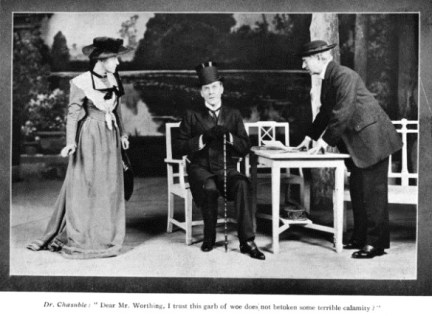 1903 – The U.S. Department of Commerce and Labor was established

1912 – The first diesel engine submarine was commissioned in Groton, CT

1920 – The League of Women Voters is founded in Chicago by Carrie Chapman Catt, and Maude Wood Park becomes its first president 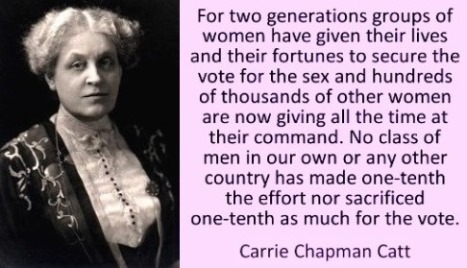 1921 – Hazel McCallion born, Canadian independent politician; she is the first Chancellor of Sheridan College, since 2016; longest-serving Mayor of Mississauga, Ontario (1978-2014), dubbed by her supporters as “Hurricane Hazel” for her outspoken style. In 2016, February 14 was declared Hazel McCallion Day * across the province of Ontario, in honor of her birthday

1926 – Monetta J Sleet Jr. born, first African American to the journalism Pulitzer Prize, for Feature Photography in 1969, for his photograph of Coretta Scott King at her husband’s funeral; worked for Ebony Magazine (1955-1996) as a photographer, capturing images of  Billie Holiday, Muhammad Ali, Stevie Wonder, and many others

1929 – Seven gangsters who were rivals of Al Capone are killed in the “St. Valentine’s Day Massacre” Chicago IL

1936 – The first meeting of the National Negro Congress is convened in Chicago, starting a campaign for labor and civil rights; over 800 people, representing 500 organizations came

1940 – First porpoise born in captivity arrives at Marineland in Florida

1946 – ENIAC (Electronic Numerical Integrator and Computer) is unveiled at the University of Pennsylvania, the world’s first general purpose electronic computer 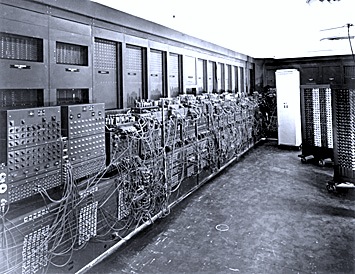 1952 – Sushma Swaraj born, Indian politician and lawyer, India’s second woman to be Minister of External Affairs (currently, since 2014); elected seven times as a Member of Parliament;  she has been called one of India’s “best loved” politicians by the Wall Street Journal

1952 – Dorothy V. Bishop born, British psychologist specializing in developmental disorders and language impairments; Professor of Developmental Neuropsychology and Wellcome Trust Principal Research Fellow in the Department of Experimental Psychology at the University of Oxford since 1998; Principal Investigator for the Oxford Study of Children’s Communication Impairments (OSCCI), and a supernumary fellow of St John’s College, Oxford

1955 – Carol Kalish born, American writer, editor, comic book retailer, wholesaler and sales manager; Direct Sales Manager and Vice President of New Product Development at Marvel Comics(1981-1991), where she was a pioneer in the comics direct market, starting a Marvel program which helped pay for the purchase of cash registers by comic book stores. Kalish won the 1991 Inkpot Award. She died suddenly at the age of 36 of a brain aneurysm

1956 – Katharina Fritsch born, German sculptor, noted for installations and sculptures which present familiar objects in jarring ways, including a true-to-scale sculpture of an elephant, and Rattenkonig, a circle of black polyester rats standing over 8 feet high

1959 – Renée Fleming born, American operatic soprano; made her debut at the Metropolitan Opera as Countess Almaviva in Le nozze di Figaro in 1991; recipient of the 2012 National Medal of Arts 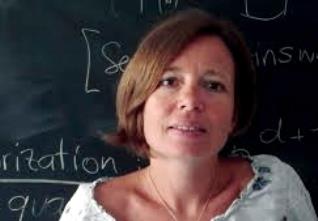 1974 – Valentina Vezzali born, Italian Olympic fencer and Scelta Civica Party (liberal-centrist) politician; member of the Italian Chamber of Deputies since 2013; she was the first fencer in Olympic history to win three individual Foil medals at three consecutive Olympics: Sydney 2000, Athens 2004, and Beijing 2008, as well as winning 14 gold medals at the World Fencing Championships

1977 – Anna G. Erschler born in Russia, mathematician working in France, specializing in geometric group theory, and probability theory, especially random walks on groups; awarded the 2001 Möbius Prize of the Independent University of Moscow, the 2002 Annual Prize of the Saint Petersburg Mathematical Society, and the 2015 Élie Cartan Prize of the French Academy of Sciences

1980 – Walter Cronkite announces his retirement from the CBS Evening News

1988 – Pet Theft Awareness Day *is launched by Last Chance for Animals; almost 2 million pets are stolen every year in the U.S. alone, so this program promotes  having pets micro-chipped or tattooed 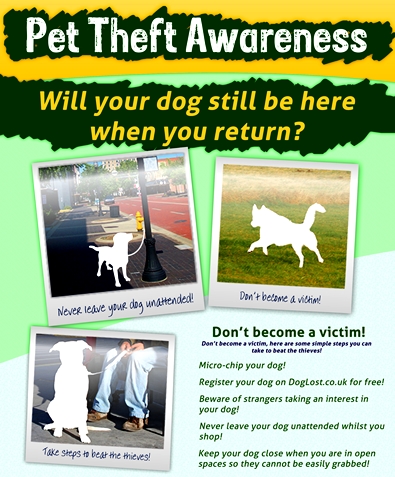 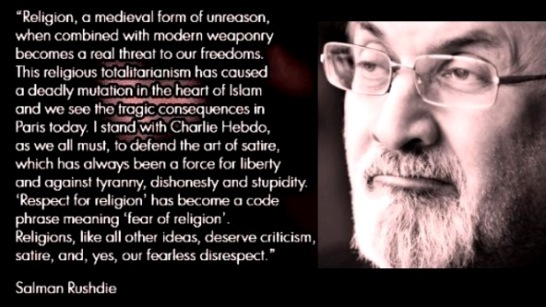 1990 – In South Africa, thousands of Black teachers march to the regional offices of the Department of Education and Training (DET) in Johannesburg to highlight the crisis in Black education. From disintegrating buildings, inadequate supplies of books and other basic equipment, to low morale among the teachers, and frequent student boycotts disrupting the classes, these problems are at their worst in urban areas, but rural areas are also suffering

1998 – U.S. authorities officially announce that Eric Rudolph is a suspect in an abortion clinic bombing in Alabama

2003 – National Donor Day * is an educational initiative of  the U.S. Health and Human Services Division of Transplantation to encourage blood donors and organ donation registration

2012 – International Book Giving Day * is conceived by Amy Broadmoore and her son, launched with help from Zoe Toft, to collect and distribute books to disadvantaged children worldwide

Nona Blyth Cloud has lived and worked in the Los Angeles area for the past 50 years, spending much of that time commuting on the 405 Freeway. After Hollywood failed to appreciate her genius for acting and directing, she began a second career managing non-profits, from which she has retired. Nona has now resumed writing whatever comes into her head, instead of reports and pleas for funding. She lives in a small house overrun by books with her wonderful husband.
View all posts by wordcloud9 →
This entry was posted in History, Holidays, On This Day and tagged Anna Howard Shaw, Aretha Franklin, Charlotta Spears Bass, Frederick Douglass, Monetta J Sleet Jr, Richard Allen, Solomon G. Brown. Bookmark the permalink.