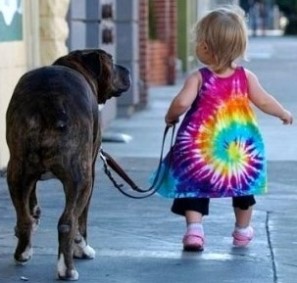 705 – Empress Wu Zetian, who became the de facto ruler of China after her husband Emperor Gaizong’s debilitating stroke and his later death, from 690 to 705, is forced to abdicate after a successful coup. Wu Zeitan is the only woman in Chinese history to wear the yellow robes as monarch which had been reserved for the sole use of emperors 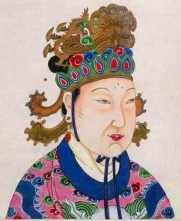 1040 – Shlomo Yiyzchaki, known as Rashi, born; influential medieval French rabbi, Talmudic scholar and author, noted for his comprehensive commentaries on the Torah and the Tanakh (the Hebrew Bible)

1371 – Robert Stewart, grandson of Robert the Bruce on his mother’s side, becomes Robert II, King of Scots, the founding monarch of the House of Stewart

1630 – Quadequine, brother of Massasoit, Wampanoag tribal leader, offers popcorn to English colonists as a token of goodwill during peace negotiations. While popcorn had long been well-known in North America – ears of popped corn about 4,000 years old have been found in caves in New Mexico – it was a new treat for the colonists

1778 – Rembrandt Peale born, American artist who painted portraits of George Washington and Thomas Jefferson; son of artist Charles Peale, who also painted George Washington; opened the Peale Museum in 1814 in Baltimore, the first building designed and built as a museum in the Western Hemisphere, and one of the first museums to use gas lighting

1784 – The U.S. sailing vessel, Empress of China, leaves New York harbor, in a voyage to become the first merchant ship of a newly independent America to enter Chinese waters; the Empress returned to New York May 11, 1785. Samuel Shaw was aboard, who would become America’s first consul in China, and the success of the voyage marked a major step in opening U.S trade with China

1805 – Sarah Fuller Flower Adams born, English poet and hymn lyricist, noted for writing the words for the hymn “Nearer, My God, To Thee” 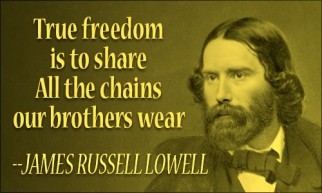 1819 – The Adams-Onís Treaty between the U.S. and Spain is signed: Spain cedes Florida to America because it had become more expensive than profitable, and its loss allows them to settle boundary disputes between the U.S. lands acquired in the Louisiana Purchase from France, and the New Spain territories, especially in Texas

1822 – Isabella Beecher Hooker, suffragist, lecturer, wrote and presented a bill to the Connecticut General Assembly that gave married women property rights; she presented it every year until it passed in 1877

1836 – Mahesh Chandra Nyayratna Bhattacharyya born, Indian Sanskrit scholar and notable figure in the Bengal Renaissance; principal of Sanskrit College (1876-1895) in Kolkata, West Bengal (since 2016, the Sanskrit College and University). He introduced the Sanskrit Title Examination, for conferment of titles on outstanding students

1855 – After donations raised by the Washington National Monument Society run out, the U.S. Congress votes to appropriate $200,000 for continuing work on the monument. But the American Party, dubbed the “Know Nothing Party,” a rabidly anti-immigrant, anti-Catholic political party, seizes control of the WNM Society, and the next morning Congress tables the resolution. The Know Nothings only add about four feet to the height of the structure, and they lose control of the WNM society in 1858

1857 – Robert Baden-Powell born, British founder and first Chief Scout of The Boy Scouts Association (1909), and co-founder with his sister Agnes of the Girl Guides (1910); author of Scouting for Boys (1908)

1859 – To prevent another takeover of the Washington National Monument Society, President Buchanan signs into law the Act of February 22, 1859, to incorporate the society “for the purpose of completing the erection now in progress of a great National Monument to the memory of Washington at the seat of the Federal Government.”

1876– Zitkala-Sha (Red Bird) born, also known as Getrude Bonnin, writer, editor, musician, teacher and Sioux Indian activist of the Yankton Dakota. In 1913, she wrote the libretto and lyrics for the first American Indian opera, The Sun Dance Opera. She was co-founder of the National Council of American Indians in 1926, a group which lobbied for U.S. citizenship and civil rights for Indians, and served as NCAM’s first President (1926-1938)

1871 – John Langalibalele Dube born, South African teacher, author, minister, newspaper editor and social justice activist; founder of the Zulu Christian Industrial School in 1900, renamed the Ohlange Institute. Dube was the founder-editor of Ilanga lase Natal, a Zulu-English newspaper. In 1912, Dube became a founding member and the first President (1912-1917) of the South African Native National Congress (SANNC), later renamed the African National Congress (ANC). In 1913, he led a deputation to Britain to protest the imposition of the Natives Land Act. In 1917, the Ohlange Institute accepted female students for the first time, in a training course for teachers. The Natal Education Department formally recognized the Ohlange Institute in 1924, offering financial assistance and subsidies for teacher salaries. In 1935, Dube founded the Natal Bantu Teachers’ Association, now called the Natal African Teachers’ Association (NATU)

1878 – Frank Woolworth opens his first store in Utica NY, “Woolworth’s Great Five Cent Store” which quickly failed because of a poor location. He took his sign, found a better location in Lancaster PA, and it grew into a chain of over 1,000 stores by 1919, when Frank Woolworth died

1892 – Oscar Wilde’s Lady Windermere’s Fan, debuts at London’s St. James Theatre; the character of Lord Darlington delivers the play’s famous line: “We are all in the gutter, but some of us are looking at the stars.” 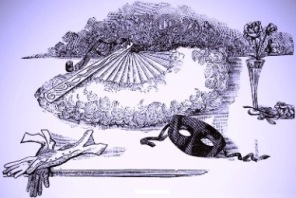 1892 – Edna St. Vincent Millay born, American poet and playwright; 1923, first woman to win Pulitzer Poetry Prize for The Ballad of the Harp-Weaver and Other Poems

1898 – Frazier Baker, the first African American appointed as postmaster of Lake City, South Carolina, is murdered. Whites in the city had carried out a hate and intimidation campaign since his appointment in 1897 to force him to leave his post. This time they set Baker’s home (which also served as the post office) on fire at 1 a.m. while he, his wife and six children are sleeping. When the family tries to escape, Baker is killed in a hail of bullets, and their two-year-old daughter is shot and killed in her mother’s arms; the same bullet broke the mother’s arm. His wife and remaining children, two of them also wounded, survive by running across the street to hide in the woods. They are all denied medical attention, but still survive 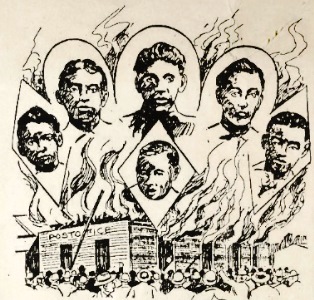 Baker family, and fire, drawing from the Boston Post

1906 – Constance Stokes, modernist Australian painter; one of only two women artists included in a major traveling exhibition of Australian artists in the 1950s which was shown in Canada, the UK and Italy

1923 – The first chinchilla farm in the U.S. opens in Los Angeles CA

1926 – World Thinking Day * is launched by the Girl Guides and Girl Scouts, now 10 million strong, as a day of international friendship, speaking out  on issues affecting girls and young women, and fundraising projects

1965 – Filming begins in the Bahamas for the Beatle’s second movie, Help!

1966 – Rachel Dratch born, American comedian and writer; part of the improvisational theatre group The Second City in Chicago, and a cast member on the TV show Saturday Night Live (1999-2006); author of Girl Walks Into a Bar: Comedy Calamities, Dating Disasters and a Midlife Miracle

1968 – In South Africa, the existing ban on marriages between White and Black people (Prohibition of Mixed Marriages Act/1949) is extended to White and Coloured people

1969 – Barbara Jo Rubin is the first woman jockey to win a U.S. thoroughbred horse race, riding Cohesian in the 9th race at the Charles Town Race Track in West Virginia

1973 – Communist China and the U.S. agree to establish liaison offices

1984 – U.S. Census Bureau statistics show that Alaska is the fastest growing state of the decade with an increase in population of 19.2 percent

1994 – U.S. Justice Department charges Aldrich Ames and his wife with selling national secrets to the Soviet Union; Ames is convicted and sentence to life in prison and his wife to a 5-year prison term

1997 – Scottish scientist Ian Wilmut and his colleagues announce the first successful cloning of an adult mammal, a sheep named Dolly, born in 1996

Dolly the sheep and Ian Wilmut

1997 – As violence increases, 30,000 Rwandan and Burundian refugees flee from the fighting, leaving their refugee camp in eastern Zaire (now the Democratic Republic of the Congo)

2006 – Insurgents destroy the golden dome of Iraq’s holy Shiite shrine, the Askariya mosque in Samarra, setting off a spasm of sectarian violence

2010 – A copy of Action Comics #1, which introduces Superman, auctions for $1 million 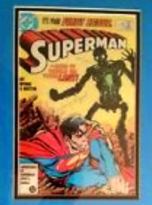 2011 – Bahraini Uprising: 100,000 anti-government protesters, demanding greater political freedom and equal treatment for the majority Shia population, take part in the “March of Loyalty to Martyrs” 5 days after the “Bloody Thursday” pre-dawn raid by Bahrain security forces to clear out protesters camping at the Pearl Roundabout in the capital city of Manama, killing four and injuring 300. Some journalists covering the protest, and medics trying to assist injured protesters, were also injured

2014 – Ukrainian President Viktor Yanukovych is ousted from office by parliament following the Euromaidan revolution (see 2014 entry for ON THIS DAY: February 20, 2019 for more)

Nona Blyth Cloud has lived and worked in the Los Angeles area for the past 50 years, spending much of that time commuting on the 405 Freeway. After Hollywood failed to appreciate her genius for acting and directing, she began a second career managing non-profits, from which she has retired. Nona has now resumed writing whatever comes into her head, instead of reports and pleas for funding. She lives in a small house overrun by books with her wonderful husband.
View all posts by wordcloud9 →
This entry was posted in History, Holidays, On This Day and tagged Arthur Schopenhauer, Frank Peterson Jr, Frazier Baker, Joanna Russ, Thillaiaadi Valliammai, Willa Brown Chapell, Zitkala-Sha. Bookmark the permalink.
%d bloggers like this: