March is National Women’s History Month in the U.S. *

Original date unknown – Baba Marta Day *(Granny March) is a Bulgarian mythical figure who brings the end of the cold winter. March 1 is celebrated as her holiday with the exchange and wearing of martenitsi, red-and-white interwoven strings for health and happiness, worn usually on the wrist, until the first stork is seen, a traditional symbol of the beginning of spring. The Bulgarian Society for Protection of Birds does an annual census of white storks in Bulgaria during the summer months

752 BC – Romulus, legendary King of Rome, is said to have celebrated the first Roman triumph after defeating neighboring Caenina. The legend says Romulus proclaimed a festival of Neptune Equester and invited all the neighboring states to attend, and then during the festival the Romans grabbed ‘the virgins’ (were they wearing ‘I’m a Virgin’ signs?) among the visitors, and drove the rest out of the city, know historically as The Rape of the Sabine Women. The Rape (used here in the sense of abduction, but probably the other meaning also applies) was staged because Rome was very short of women, and negotiations for brides with the Caeninenses, the Crustumini, and Antemnates, and the Sabines had failed. The historian Livy makes the unlikely claim that no direct sexual assault (what constitutes indirect sexual assault?) took place, but that Romulus offered the women free choice and promised them civic and property rights; if such promises were made, they don’t seem to have been kept. In the early days of Rome, a girl of 15-18 went directly from her father’s control to her husband’s, while the groom chosen for her was likely to be at least in his mid-to-late 20s. Even though technically she could not be forced to marry, the repercussions of not consenting were too daunting for most young women to resist. Legend says when the Sabines marched on Rome, the captured Sabine women, now Roman brides, threw themselves between the warring armies, begging their fathers, brothers and husbands to make peace, and so the Sabines merged with the Romans 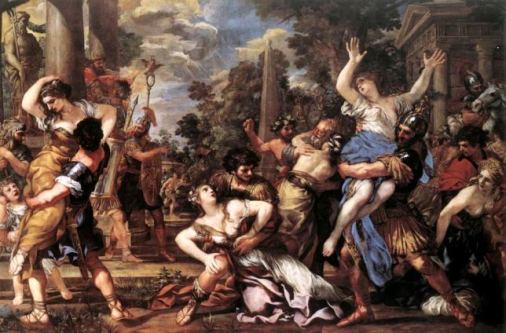 The Rape of the Sabine Women by Pietro da Cortona

589 – St. David’s Day * is the traditional date of his death; Welsh bishop of Mynyw (now St. Davids), renowned as a teacher and orator, who founded monastic settlements and churches in Wales; the Monastic Rule of David prescribed that monks had to pull the plough themselves without draught animals, must drink only water and eat only bread with salt and herbs, and spend the evenings in prayer, reading and writing. No personal possessions were allowed: even to say “my book” was considered an offence. He lived a simple life, and taught his followers to stop eating meat and drinking beer. His symbol, also the symbol of Wales, is the leek. Saint David is the patron saint of Wales, vegetarians and poets 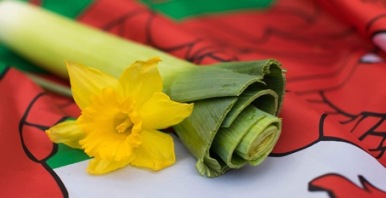 Symbols of Wales: the daffodil, the leek and the Welsh flag 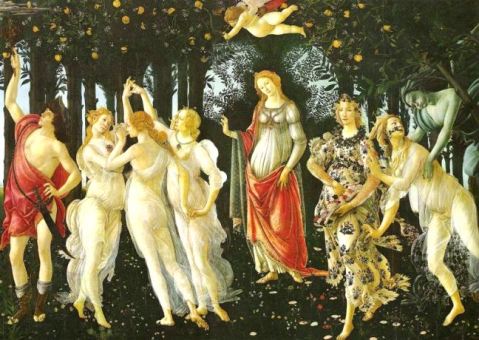 1457 – The Unitas Fratrum is established in the village of Kunvald, on the Bohemian-Moravian borderland, the second oldest Protestant denomination

1510 – Francisco de Almeida, after serving as viceroy of the Portuguese State of India (1505-1509) is returning home with three ships, the Garcia, Belém and Santa Cruz, when they drop anchor near South Africa’s Cape of Good Hope to replenish their water supply. They trade iron with the Khoikhoi people for some cattle, but the cordial relations come to an abrupt end when 12 Portuguese sailors go to the Khoikhoi village and try to steal more cattle. The enraged villagers chase the thieves back to their ships, where the sailors beg Almeida to take revenge on the Khoikhoi who defended their cattle. Although Almeida admitted that his men were to blame, he still leads a party of 150 men armed with swords, lances and crossbows on a raiding party. They attempt to seize a number of children and cattle, but about 170 Khoikhoi warriors fight back with stones and assegais (iron-tipped wooden spears), using their cattle as shields. The warriors rout the raiders, and kill 64 of them, including Almeida and 11 of his captains 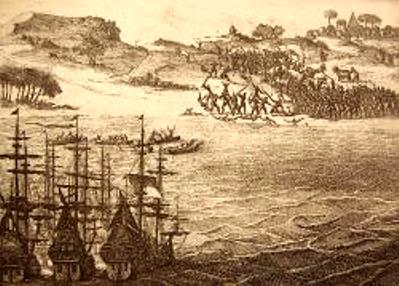 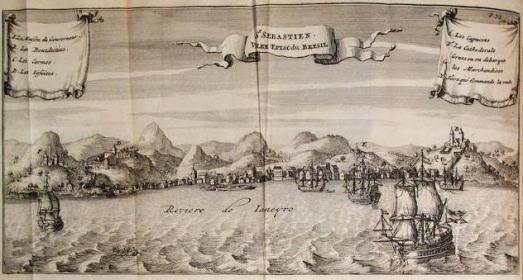 1683 – Caroline of Brandenburg-Ansbach born, Queen consort of Great Britain and Ireland, and Electress consort of Hanover, married to King George II, noted for her political alliance with leading British minister Robert Walpole, and her major influence over policy, including more freedom of the press and of speech in Parliament, and urging clemency for the Jacobites. She was made temporary regent for five months in 1729 while her husband was attending to duties in Hanover, during which she helped defuse a diplomatic crisis over the Portuguese seizure of a British ship, and pressed for reform of the penal system, after an investigation revealed widespread abuses, but was unable to gain any major changes to the outdated system. She was far more intellectual and more widely read than her husband, who often listened to her council, and was a notable patron of the arts and letters. She was widely mourned in the British Isles when she died, by Protestants for her moral example, and even by many Jacobites because of her intervention for mercy toward their compatriots. King George II refused to remarry 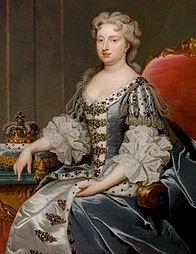 1781 – Javiera Carrera born, Chilean activist in the War of Independence, credited with sewing the first national flag, called the “Mother of Chile” 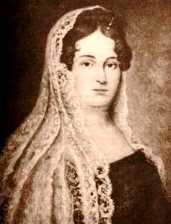 1816 – Missão Artística Francesa, the French Artistic Mission in Brazil (exact date of arrival not listed), a group of French artists and architects arrive in Rio de Janeiro, at the time capital of the United Kingdom of Portugal, Brazil and the Algarves, under the auspices of the royal court of Portugal, which had fled to Brazil in 1808 when Napoleon invaded Portugal. The purpose of the group was to found the Escola Real de Ciências, Artes e Ofícios (Royal School of Sciences, Arts and Crafts), which later became the Escola Nacional de Belas Artes (National School of Fine Arts). In 1936, a similar group, with the support of anthropologist Claude Lévi-Strauss, came to help with programs of the new Arts departments at Universidade de São Paulo (the University of São Paulo), the largest public university in Brazil, originally established in 1934

1869 – Postage stamps with scenes are issued for the first time

1879 – The library of Hawaii is established

The Art Party, by Theresa Bernstein-Meyerowitz

1893 – Mercedes de Acosta born, American author, poet, and playwright; she was more admired for her decorative taste and elegance than for her writing, and had several lesbian relationships with well-known performers from Broadway and Hollywood, including Alla Nazimova, Isadora Duncan, Eva Le Gallienne, Marlene Dietrich, and most famously with Greta Garbo. She was a tireless advocate for women’s rights, studied Hindu mysticism for several years, became a vegetarian, and refused to wear fur coats or any fur on her clothing 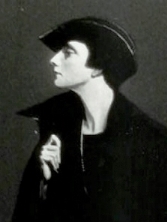 1907 – In New York, the Salvation Army opens an anti-suicide bureau

1919 – Samil Day* in South Korea, anniversary of the Samil Movement demonstrations across Korea rallying for independence from Japan, which had annexed on the country in 1910; a proclamation of Korea’s independence is read by movement leaders, who turn themselves into the Japanese police; days of continuing protests and marches follow, which are mostly non-violent by the Koreans, but met with deadly force and thousands of arrests by the Japanese; the opposition falters, but muted opposition continues under a new Japanese governor who rolls back some restrictions, and allows limited Korean representation; the Korean Communist Party is founded in 1920, and splits off  from the Samil movement, eventually leading to dividing the country into North and South Korea

1934 – Joan Hackett born, American stage, film and television actress; noted for her performances in The Group, Will Penny and The Last of Sheila; active supporter of the Equal Rights Amendment (ERA); died of ovarian cancer at age 49 – her epitaph reads: “Go Away – I’m Asleep” 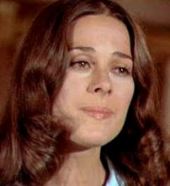 1940 – The novel Native Son by Richard Wright is published

1941 – FM Radio begins in Nashville TN, when station W47NV goes on the air

1950 – Klaus Fuchs is convicted of giving U.S. atomic secrets to the Soviet Union

1952 – Jerri Lin Nielson born, American physician, after discovering a breast tumor while working in Antarctica in 1998, she self-administered a biopsy, and later chemotherapy, using supplies that had to be parachuted to her. In spite of weather delays which caused her evacuation to be several weeks later than planned, she survived the ordeal, and co-wrote Ice Bound: A Doctor’s Incredible Story of Survival at the South Pole. But in 2005, the cancer recurred and metastasized, spreading to her brain. She died in 2009 at age 57

1954 – U.S. announces it set off a hydrogen bomb test on the Bikini Atoll

1956 – Dalia Grybauskaitė born, Lithuanian politician; first woman President of Lithuania, elected in 2009, and re-elected in 2014, the first Lithuanian President reelected for a consecutive second term; previously Minister of Finance and European Commissioner for Financial Programming and the Budget (2004 – 2009)

1966 – The Soviet probe, Venera 3, crashes on Venus, the first unmanned spacecraft to reach the surface of another planet

1968 – Elton John’s first single, “I’ve Been Loving You,” is released in England

1971 – A bomb explodes in a Senate restroom, but there were no injuries; a  U.S. group protesting the Vietnam War claims responsibility

1973 – The Robert Joffrey Dance Company debuts the Deuce Coupe Ballet, with music by The Beach Boys

Molly Murphy MacGregor, one of the founders of Women’s History Week,
with an Eleanor Roosevelt poster in the background

1983 – Lupita Nyong’o born in Mexico City, of Kenyan parents, Kenyan actress; noted for Twelve Years a Slave, for which she won 2014’s Best Supporting Actress Oscar, and Black Panther; activist for women’s rights, against sexual harassment, for diversity and for prevention of cruelty to animals

1989 – In Washington DC, Mayor Barry and the City council impose a curfew on minors

1990 – Civil Defense Day * is started by the International Civil Defense Organization, commemorating the ICDO Constitution coming into force as an intergovernmental organization in 1972

1992 – Bosnian Muslims and Croats vote to secede from Yugoslavia

1993 – The U.S. government announces the number of food stamp recipients reached a record number of 26.6 million 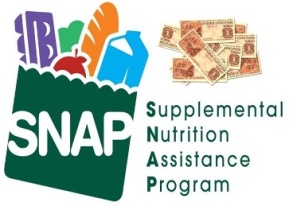 1999 – Rwandan Hutu rebels, angered by American and British support of the Tutsi government in Rwanda, kill four Bwindi National Park rangers, then abduct foreign tourists from an expedition to see rare mountain gorillas in the Ugandan rain forest, and hack to death eight of them: two Americans, four British nationals and two citizens of New Zealand

2003 – A $250,000 Salvador Dali sketch is stolen from a display case in the lobby at NY’s Rikers Island jail; later four corrections officers surrender, pleading innocent in connection to the theft

2003 – In the U.S., approximately 180,000 personnel from 22 different government entities become part of the Department of Homeland Security, completing the largest government reorganization since the beginning of the Cold War

2003 – Khalid Shaikh Mohammed, suspected mastermind behind the 9-11 terrorist attacks on the U.S., is captured by CIA and Pakistani agents near Islamabad

2014 – Zero Discrimination Day * is launched by UNAIDS to end all forms of discrimination in healthcare, education, employment and civil rights for all people

Nona Blyth Cloud has lived and worked in the Los Angeles area for the past 50 years, spending much of that time commuting on the 405 Freeway. After Hollywood failed to appreciate her genius for acting and directing, she began a second career managing non-profits, from which she has retired. Nona has now resumed writing whatever comes into her head, instead of reports and pleas for funding. She lives in a small house overrun by books with her wonderful husband.
View all posts by wordcloud9 →
This entry was posted in History, Holidays, On This Day and tagged Bessie Smith, Billie Holiday, Ella Fitzgerald, Javiera Carrera, Lupita Nyong'o, Merlie Evers-Williams, Sarah Vaughn. Bookmark the permalink.
Loading Comments...
Comment
×
<span>%d</span> bloggers like this: