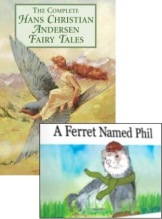 Belarus – Unity Day
(of the People of Russia and Belarus)

742 – Charlemagne born, King of the Franks and Lombards, Carolus Magnus, Karl Der Grosse, Emperor; it’s rumored that knives are first used to eat food, rather than just fingers, at his gatherings

1550 – Genoa Italy expels Jews for the second time, many of them families of refugees from the Spanish expulsion in 1492, including Joseph ha-Kohen, physician and historian; his success as a doctor arouses envy among his non- Jewish rivals

1647 – Maria Sibylla Merian born in Germany, naturalist and scientific illustrator who spent years in Amsterdam, and traveled to Surinam in South America to study its flora and fauna; she was one of the first naturalists to observe insects directly; her major work is Metamorphosis Insectorum Surinamensium (1705)

1731 – Catharine Macaulay born, English historian and radical political writer. She had regular correspondence with such figures involved in the American Revolution as Mercy Otis Warren, John Adams, Benjamin Franklin, Ezra Stiles, and George Washington. As an author, she is noted for The History of England from the Accession of James I to the Revolution;Treatise on the Immutability of Moral Truth; and Letters on Education

1739 – George Frideric Handel finishes “The Cuckoo and the Nightingale”

1792 – The Coinage Act establishes the U.S. Mint, and authorizes the $10 Eagle, $5 half-Eagle and $2.50 quarter-Eagle gold coins, plus silver coins of a dollar, ½ dollar, quarter, dime and half-dime

1845 – French physicists H.L.Fizeau and Leon Foucault take the first photo of the Sun

1863 – The Richmond Bread Riots: Civil War food shortages in Richmond VA cause hundreds of angry women to march to the governor’s office, and then on to the government commissary, where they break in, taking everything they can carry; shops and even a hospital are also looted; a few arrests are made, but authorities pressure newspapers to downplay the story; official records are destroyed in 1865 when the Confederate government flees, leaving much of Richmond burning in their wake

1865 – Evacuation Sunday: Confederate President Jefferson Davis, his cabinet and the Confederate army defenders abandon Richmond, fleeing south on the last open railroad line; the soldiers, under orders, set fires to bridges, the armory and supply warehouses as they leave, destroying much of the city as fires spread out of control 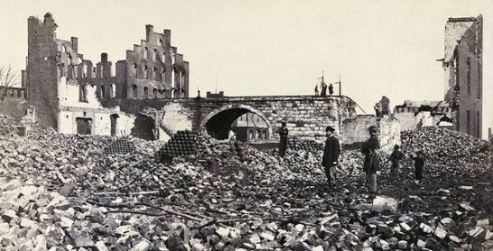 1879 – Anglo-Zulu War, Battle of Gingindlovu: King Cetshwayo’s army of 10,000 was defeated by two divisions of British troops supported by Zulu troops, and his military kraal is destroyed 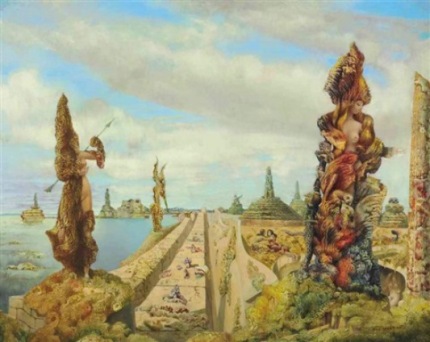 1905 – Cecil Rhodes’ ambitious Cape-to-Cairo railway opens the section from Cape Town to Victoria Falls, with the completion of the Victoria Falls Bridge; the full project is never finished, but local railways, roads and water transport eventually provide links for passengers

1912 – RMS Titanic undergoes sea trials to test handling characteristics in the Belfast Lough and the open waters of the Irish Sea, reaching speeds up to 21 knots

1912 – George Mnyaluza Pemba born, South African artist and playwright; in 1944, he was commissioned by the Bantu Welfare trust to paint scenes of Black tribal life; also noted for his play Nonqause 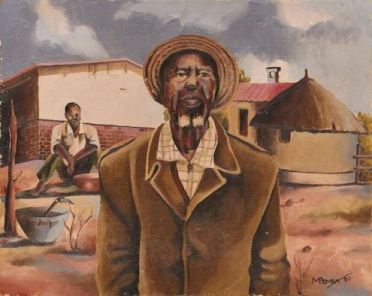 Bearded Man at the Kraal, by George Mnyaluza Pemba

1917 – Jeannette Rankin (R-Montana) begins the first day of her term as the first woman member of U.S. House of Representatives, on the same day that President Woodrow Wilson asks Congress to declare war on Germany: “The world must be made safe for democracy.” Rankin, an avowed pacifist, will be one of the few to vote against declaring war, which will cost her re-election; later, she is elected again, just in time to cast the only dissenting vote against WWII after Pearl Harbor

1921 – The Autonomous Government of Khorasan, a military government encompassing the modern state of Iran, is established, but collapses by October the same year

1939 – Marvin Gaye born, singer-songwriter; “I Heard It Through the Grapevine”

1945 – Linda Hunt born, American actress; won an Academy Award for Best Supporting Actress for her break-through role as Billy Kwan in The Year of Living Dangerously, the first person to win an Oscar for playing a character of the opposite sex

1946 – Sue Townsend born, English playwright, screenwriter, humorist and novelist; best known for creating the character Adrian Mole, first noted in the radio drama, The Diary of Nigel Mole, Aged 13¼, but he became the main character in her Adrian Mole series of novels, after the publisher insisted on changing his first name because of the character Nigel Molesworth created by Ronald Searle and Geoffrey Willans

1948 – Joan D. Vinge born, American Science Fiction author and poet; noted for her novel, The Snow Queen, won the 1981 Hugo Award for Best Novel, which was followed by sequels The Summer Queen, World’s End and Tangled Up in Blue

1953 – Rosemary Bryant Mariner born, American aviator; she joined the U.S. Navy in  1973, and was one of the first six women to earn their wings as U.S. Navy Aviators in 1974. She was the first woman military aviator to fly a tactical jet, the first woman aviator assigned to an aircraft carrier, and the first to command an operational aviation squadron, Tactical Electronic Warfare Squadron Thirty Four (VAQ-34) during Operation Desert Storm (1990-1991). Mariner was president of the Women Military Aviators (1991-1993). In 1993, when restrictions were removed on women pilots flying combat missions, she was one of four women aviators promoted to captain. She retired from the Navy in 1997, and was a resident scholar in the Center for the Study of War and Society and a lecturer in the Department of History from 2002 to 2016 at the University of Tennessee. She died of ovarian cancer in 2019. The Navy conducted the first all-woman pilot nine-aircraft ‘Missing Man Flyover’ for her funeral 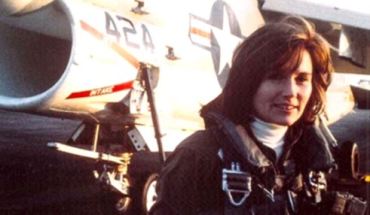 1953 – Malika Oufkir born, Moroccan Berber writer; when her father, General Mohamed Oufkir, was executed for his part in an attempted coup d’état in 1972, her family were first confined to house arrest in southern Morocco (1973-1977). Then they were sent to a secret prison in the Sahara desert for 15 years, then kept under house arrest. In 1991, they were among a small group of political prisoners to be released. Malika Oufkir moved to Paris with her brother Raouf and sister Soukaina in 1996. Her book, Stolen Lives: Twenty Years in a Desert Jail, the story of their ordeal, was written in French with Tunisian author Michèle Fitoussi 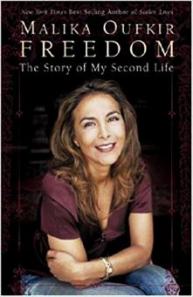 1957 – Caroline Dean born, British biologist and plant scientist; her work focuses on the molecular controls used by plants to seasonally determine when to flower, with a particular interest in vernalisation – the acceleration of flowering in plants by exposure to periods of prolonged cold. She has been honored with the 2007 Genetics Society Medal, the 2015 FEBS (Federation of European Biochemical Societies) EMBO Women in Science Award, and is a member of the European Molecular Biology Organization (EMBO)

1960 – Pascale Nadeau born, news presenter for Télévision de Radio-Canada from Quebec on the network’s flagship newscast Le Téléjournal since September 2008. She began her career in journalism at the news radio station CKAC in Montreal

Charlie Chaplin at the 1972 Oscars

1982 – Argentina, which calls the islands the Malvinas,* seizes the disputed Falkland Islands from Great Britain, setting off the Falklands War

1987 – Nnoseng Ellen Kuzwayo (1914-2006) becomes the first Black woman to receive an honorary degree from the University of the Witwatersrand, the third oldest university in South Africa. She was a teacher (1938-1952) until the Apartheid regime introduced Bantu education. She next became a social worker. After the 1976 Soweto uprising, she was the only woman on a committee of ten created to organize civic affairs in Soweto, and was detained for five months under the Prevention of Terrorism Act for her activism. Kuzwayo was elected as a Member of Parliament (1994-1999) in the nation’s first democratic election, and wrote several books, including her autobiography, Call Me Woman, which highlights her struggle with domestic violence during her first marriage, and won the South African Central News Agency Literary Award

1989 – National Reconciliation Day * is promoted by Ann Landers in response to a reader’s letter, and annually in her column each year after

1991 – Rita Johnson becomes the first woman Premier of a Canadian province, British Columbia, when she succeeds William Vander Zalm after his resignation

2002 – Israel seizes control of Bethlehem, after Palestinian gunmen force their way into the Church of the Nativity, traditional birthplace of Jesus, beginning a 39-day standoff

2014 – Iran and six world powers agree to a framework for a deal to curb the country’s nuclear program. The tentative accord came after eight days of marathon talks in Switzerland, and two extensions of the deadline. The deal includes concrete steps to ensure Iran won’t build a nuclear weapon, in exchange for the other nations lifting sanctions against Iran

Nona Blyth Cloud has lived and worked in the Los Angeles area for the past 50 years, spending much of that time commuting on the 405 Freeway. After Hollywood failed to appreciate her genius for acting and directing, she began a second career managing non-profits, from which she has retired. Nona has now resumed writing whatever comes into her head, instead of reports and pleas for funding. She lives in a small house overrun by books with her wonderful husband.
View all posts by wordcloud9 →
This entry was posted in History, Holidays, On This Day and tagged Anne Waldman, Émile Zola, Catharine Macaulay, Charlie Chaplin, Francisco Balagtas, Hans Christian Andersen, Sue Townsend. Bookmark the permalink.