April is a good month for poetry-lovers.

This week’s Word Cloud poet is Seamus Heaney (1939-2013), who was born on April 13, in Northern Ireland, but lived much of his life in Dublin. Heaney is as famous for his translations as he is for his own poems. As a guide to Ireland’s past and present, and to
the ancient world of Myth and Legend, he has few peers.

Between my finger and my thumb
The squat pen rests; snug as a gun.

Under my window, a clean rasping sound
When the spade sinks into gravelly ground:
My father, digging. I look down

Till his straining rump among the flowerbeds
Bends low, comes up twenty years away
Stooping in rhythm through potato drills
Where he was digging.

The coarse boot nestled on the lug, the shaft
Against the inside knee was levered firmly.
He rooted out tall tops, buried the bright edge deep
To scatter new potatoes that we picked,

Loving their cool hardness in our hands.

By God, the old man could handle a spade.
Just like his old man.

My grandfather cut more turf in a day
Than any other man on Toner’s bog.
Once I carried him milk in a bottle
Corked sloppily with paper. He straightened up
To drink it, then fell to right away
Nicking and slicing neatly, heaving sods
Over his shoulder, going down and down
For the good turf. Digging.

The cold smell of potato mould, the squelch and slap
Of soggy peat, the curt cuts of an edge
Through living roots awaken in my head.
But I’ve no spade to follow men like them.

Between my finger and my thumb
The squat pen rests.
I’ll dig with it.

For Heaney, the past seems closer than it is for most of us. His imagination carries us with him as he looks at an empty, icy Atlantic, hearing battle-clash, and long-dead voices.

I returned to a long strand,
the hammered curve of a bay,
and found only the secular
powers of the Atlantic thundering.

I faced the unmagical
invitations of Iceland,
the pathetic colonies
of Greenland, and suddenly

those fabulous raiders,
those lying in Orkney and Dublin
measured against
their long swords rusting,

those in the solid
belly of stone ships,
those hacked and glinting
in the gravel of thawed streams

were ocean-deafened voices
warning me, lifted again
in violence and epiphany.
The longship’s swimming tongue

was buoyant with hindsight—
it said Thor’s hammer swung
to geography and trade,
thick-witted couplings and revenges,

the hatreds and behind-backs
of the althing, lies and women,
exhaustions nominated peace,
memory incubating the spilled blood.

It said, ‘Lie down
in the word-hoard, burrow
the coil and gleam
of your furrowed brain.

Compose in darkness.
Expect aurora borealis
in the long foray
but no cascade of light.

Keep your eye clear
as the bleb of the icicle,
trust the feel of what nubbed treasure
your hands have known.’

There is a terrifying randomness to war, especially civil war, because you know people on both sides. Step to the left, instead of the right, and you live. Turn to the person standing next to you, and suddenly, his blood and bone explodes in your face. It changes who you are, and what’s important.

He would drink by himself
And raise a weathered thumb
Towards the high shelf,
Calling another rum
And blackcurrant, without
Having to raise his voice,
Or order a quick stout
By a lifting of the eyes
And a discreet dumb-show
Of pulling off the top;
At closing time would go
In waders and peaked cap
Into the showery dark,
A dole-kept breadwinner
But a natural for work.
I loved his whole manner,
Sure-footed but too sly,
His deadpan sidling tact,
His fisherman’s quick eye
And turned observant back.

Incomprehensible
To him, my other life.
Sometimes on the high stool,
Too busy with his knife
At a tobacco plug
And not meeting my eye,
In the pause after a slug
He mentioned poetry.
We would be on our own
And, always politic
And shy of condescension,
I would manage by some trick
To switch the talk to eels
Or lore of the horse and cart
Or the Provisionals.

But my tentative art
His turned back watches too:
He was blown to bits
Out drinking in a curfew
Others obeyed, three nights
After they shot dead
The thirteen men in Derry.
PARAS THIRTEEN, the walls said,
BOGSIDE NIL. That Wednesday
Everyone held
His breath and trembled.

It was a day of cold
Raw silence, wind-blown
Surplice and soutane:
Rained-on, flower-laden
Coffin after coffin
Seemed to float from the door
Of the packed cathedral
Like blossoms on slow water.
The common funeral
Unrolled its swaddling band,
Lapping, tightening
Till we were braced and bound
Like brothers in a ring.

But he would not be held
At home by his own crowd
Whatever threats were phoned,
Whatever black flags waved.
I see him as he turned
In that bombed offending place,
Remorse fused with terror
In his still knowable face,
His cornered outfaced stare
Blinding in the flash.

He had gone miles away
For he drank like a fish
Nightly, naturally
Swimming towards the lure
Of warm lit-up places,
The blurred mesh and murmur
Drifting among glasses
In the gregarious smoke.
How culpable was he
That last night when he broke
Our tribe’s complicity?
‘Now, you’re supposed to be
An educated man, ‘
I hear him say. ‘Puzzle me
The right answer to that one.’

I missed his funeral,
Those quiet walkers
And sideways talkers
Shoaling out of his lane
To the respectable
Purring of the hearse…
They move in equal pace
With the habitual
Slow consolation
Of a dawdling engine,
The line lifted, hand
Over fist, cold sunshine
On the water, the land
Banked under fog: that morning
I was taken in his boat,
The screw purling, turning
Indolent fathoms white,
I tasted freedom with him.
To get out early, haul
Steadily off the bottom,
Dispraise the catch, and smile
As you find a rhythm
Working you, slow mile by mile,
Into your proper haunt
Somewhere, well out, beyond… 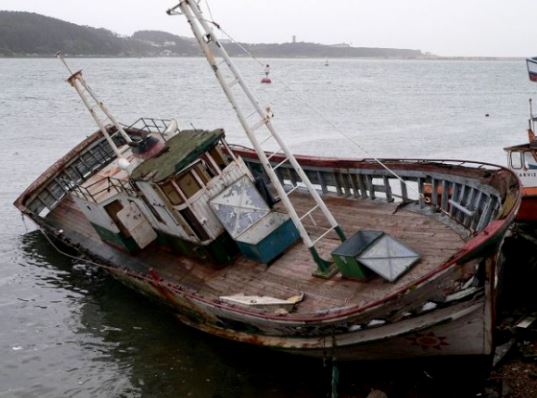 Heaney’s descriptions often blend past and present, as working the peat brings relics to the light after centuries smothered in the dark.

We have no prairies
To slice a big sun at evening–
Everywhere the eye concedes to
Encrouching horizon,

Is wooed into the cyclops’ eye
Of a tarn. Our unfenced country
Is bog that keeps crusting
Between the sights of the sun.

They’ve taken the skeleton
Of the Great Irish Elk
Out of the peat, set it up
An astounding crate full of air.

Butter sunk under
More than a hundred years
Was recovered salty and white.
The ground itself is kind, black butter

Only the waterlogged trunks
Of great firs, soft as pulp.
Our pioneers keep striking
Inwards and downwards,

Every layer they strip
Seems camped on before.
The bogholes might be Atlantic seepage.
The wet centre is bottomless. 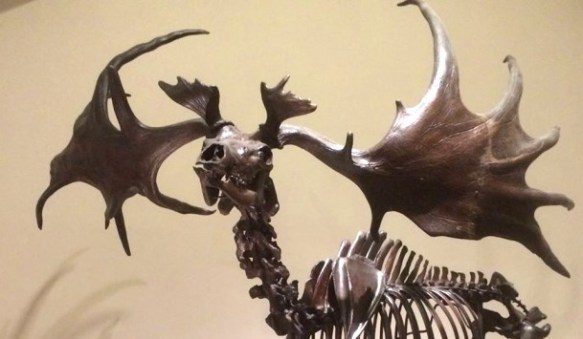 The best of poetry makes us see things anew which we take for granted. This poem is about more than blackberries, but it’s still about them, too. 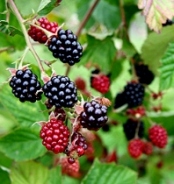 For a full week, the blackberries would ripen.
At first, just one, a glossy purple clot
Among others, red, green, hard as a knot.
You ate that first one and its flesh was sweet
Like thickened wine: summer’s blood was in it
Leaving stains upon the tongue and lust for
Picking. Then red ones inked up and that hunger
Sent us out with milk cans, pea tins, jam-pots
Where briars scratched and wet grass bleached our boots.
Round hayfields, cornfields and potato-drills
We trekked and picked until the cans were full,
Until the tinkling bottom had been covered
With green ones, and on top big dark blobs burned
Like a plate of eyes. Our hands were peppered
With thorn pricks, our palms sticky as Bluebeard’s.

We hoarded the fresh berries in the byre.
But when the bath was filled we found a fur,
A rat-grey fungus, glutting on our cache.
The juice was stinking too. Once off the bush
The fruit fermented, the sweet flesh would turn sour.
I always felt like crying. It wasn’t fair
That all the lovely canfuls smelt of rot.
Each year I hoped they’d keep, knew they would not.

For those of us who live in earthquake or volcanic country, this poem has added meaning.

Anything can happen. You know how Jupiter 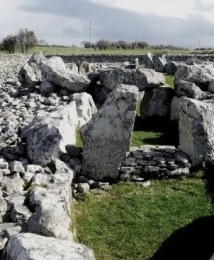 Will mostly wait for clouds to gather head
Before he hurls the lightning? Well, just now
He galloped his thunder cart and his horses

Across a clear blue sky. It shook the earth
And the clogged underearth, the River Styx,
The winding streams, the Atlantic shore itself.
Anything can happen, the tallest towers

Be overturned, those in high places daunted,
Those overlooked regarded. Stropped-beak Fortune
Swoops, making the air gasp, tearing the crest off one,
Setting it down bleeding on the next.

Ground gives. The heaven’s weight
Lifts up off Atlas like a kettle-lid.
Capstones shift, nothing resettles right.
Telluric ash and fire-spores boil away.

Heaney seemed more hopeful in his poems as he reached the half-century mark, an optimism which caught him off-guard.

At school I loved one picture’s heavy greenness –
Horizons rigged with windmills’ arms and sails.
The millhouses’ still outlines. Their in-placeness
Still more in place when mirrored in canals.
I can’t remember never having known
The immanent hydraulics of a land 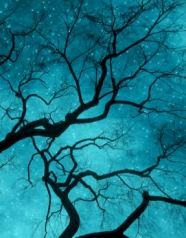 Of glar and glit and floods at dailigone.
My silting hope. My lowlands of the mind.

Heaviness of being. And poetry
Sluggish in the doldrums of what happens.
Me waiting until I was nearly fifty
To credit marvels. Like the tree-clock of tin cans
The tinkers made. So long for air to brighten,
Time to be dazzled and the heart to lighten.

Seamus Heaney was dubbed “Famous Seamus” in Ireland – he was that rare poet who pleased critics, academics and the public in equal measure. In 1995, when he won the Nobel Prize for Literature, he was a popular choice. In 2008, two-thirds of all poetry titles sold in the U.K. were his.

Heaney once said: “I can’t think of a case where poems changed the world, but what they do is they change people’s understanding of what’s going on in the world.”

It’s an apt description of his poems, so deeply Irish, but universally understandable. They appeal to the ear, and catch at the heart.  It’s no wonder that he’s considered one of the ‘Major Poets of the 20th Century,’ but also one of April’s great joys for lovers of words.

Nona Blyth Cloud has lived and worked in the Los Angeles area for the past 50 years, spending much of that time commuting on the 405 Freeway. After Hollywood failed to appreciate her genius for acting and directing, she began a second career managing non-profits, from which she has retired. Nona has now resumed writing whatever comes into her head, instead of reports and pleas for funding. She lives in a small house overrun by books with her wonderful husband.
View all posts by wordcloud9 →
This entry was posted in Ireland, Poetry, Word Cloud and tagged Bog, Irish Elk, Myths and Legends, Nobel Prize for Literature, Seamus Heaney, Thomas Frederick Mason Sheard. Bookmark the permalink.
Loading Comments...
Comment
×
<span>%d</span> bloggers like this: