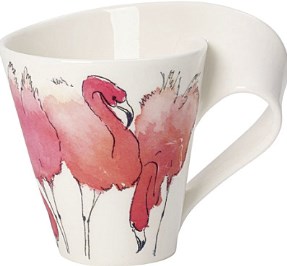 If bathroom genders are indicated by flamingos,
the boy flamingo is the one with a hat.
I learned this the hard way.

Wherever the flamingo goes,
she brings a city’s worth
of furbelows. She seems
unnatural by nature—
too vivid and peculiar
a structure to be pretty,
and flexible to the point
of oddity. Perched on
those legs, anything she does
seems like an act. Descending
on her egg or draping her head
along her back, she’s
too exact and sinuous
to convince an audience
she’s serious. The natural elect,
they think, would be less pink,
less able to relax their necks,
less flamboyant in general.
They privately expect that it’s some
poorly jointed bland grey animal
with mitts for hands
whom God protects.

Nona Blyth Cloud has lived and worked in the Los Angeles area for the past 50 years, spending much of that time commuting on the 405 Freeway. After Hollywood failed to appreciate her genius for acting and directing, she began a second career managing non-profits, from which she has retired. Nona has now resumed writing whatever comes into her head, instead of reports and pleas for funding. She lives in a small house overrun by books with her wonderful husband.
View all posts by wordcloud9 →
This entry was posted in The Coffee Shop and tagged Dance, Danza de Los Flamencos, Dave Barry, Flamingo Watching, Flamingos, In Honor of International Dance Day, Kay Ryan, TCS. Bookmark the permalink.
Loading Comments...
%d bloggers like this: