Malaysia – Perlis:
Birthday of the Raja

1155 – Jien of the Tendai born, a Japanese historian, poet and Buddhist monk; his masterwork, completed around 1220, is entitled Gukanshō (Jottings of a Fool) 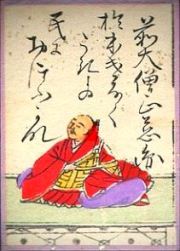 Jien in the Hyakunin Isshu

1521 – Edward Stafford, 3rd Duke of Buckingham, accused of listening to prophecies of of Henry VIII’s death and intending to kill the King, is executed for treason 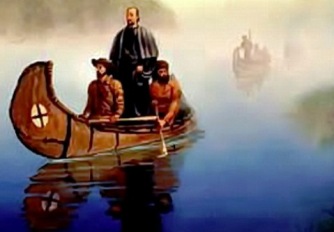 1749 – Edward Jenner born, English physician and scientist who was the pioneer of smallpox vaccine, the world’s first vaccine

1792 – The Buttonwood Agreement: The New York Stock Exchange is founded by brokers meeting under a tree on what is now Wall Street

1794 – Anna Brownell Jameson born in Dublin, British author, early feminist, and considered the first British art historian; The Diary of an Ennuyée, The Loves of the Poets, Characteristics of Women

1805 – Muhammad Ali Pasha, an Ottoman Albanian commander, becomes Wāli (administrative governor) of Egypt (1805-1848). Noted for instituting dramatic reforms to the military, nationalizing the fertile farmlands owned by the wealthy, requiring all goods producers to sell only to the state, creating a professional central bureaucracy and  professional police forces in Cairo and Alexandria, and the founding of a women’s school of medicine to train nurses and doctors to treat women and children. Under Egyptian law, women could not be seen by male doctors. Most of the women students were slaves or orphans, as education for women was frowned upon. The graduates greatly reduced the incidence of smallpox by vaccinating thousands of women and children, which furthered Muhammad Ali Pasha’s long-term goal of an expanded and more effective military 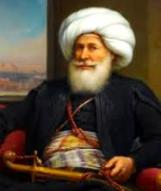 1836 – Virginie Loveling born in Belgium, Flemish poet, novelist, and children’s author; she was co-author with her sister Rosalie of poetry and two collections of essays, and also wrote solo under the pen name W. E. C. Walter; best known for her novels, Een Dure Eed (An Expensive Oath), De twistappel (The Twist Apple), and Een revolverschot (A Gunshot)

1845 – Jacint Verdaguer born in Spain, regarded as one of the greatest poets of Catalan literature, a Roman Catholic priest; noted for his epic poems L’Atlàntida and Canigó

1860 – Charlotte Barnum born, American mathematician and social activist; after being turned down for graduate studies at Johns Hopkins University because they did not accept women; she persisted, and became the first woman to receive a Ph.D. in mathematics from Yale University (1895); from 1901 to 1913, she worked in Washington DC, for U.S. Naval Observatory, U.S. Coast and Geodetic Survey, and U.S. Department of Agriculture; one of the first women members of the American Mathematical Society 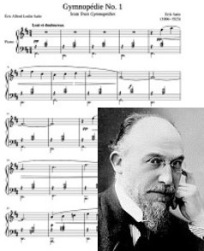 1873 – Dorothy Richardson born, British journalist, feminist and author of Pilgrimage, a sequence of 13 novels, beginning with Pointed Roofs. Richardson’s work fell out of favour in the 1930s, but was reprinted by Virago Press in the 1970s, and she is now considered a pioneer in ‘stream of consciousness’ narration

1875 – The first Kentucky Derby is run, won by Aristides 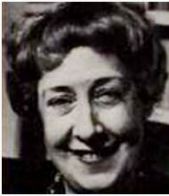 1912 – Mary Beatrice Davidson Kenner born, African American inventor most noted for developing the sanitary belt with a moisture-proof napkin pocket, but the company that first showed interest in her invention rejected it after discovering that she was a black woman, so it wasn’t used until 30 years after she invented it. She earned her living as a professional floral arranger, eventually owning her own business

1938 – Marcia Freedman born in the U.S., American-Israeli activist for peace, women’s and LGBT rights, and politician; she and her family moved to Israel in 1967, and she was one of the early leaders of the feminist movement in Israel. Freedman was founding president of Brit Tzedek v’Shalom (Jewish Alliance for Justice and Peace); served in the Knesset (1974-1977); was a co-founder of Israel’s first shelter for battered women in Haifa in 1977, and a founder of the Community of Learning Women in the 1990s, which provided education in women’s studies and computer literacy. Her memoir, Exile in the Promised Land, was published in 1990

1950 – Valeriya Novodvorskaya born, Soviet dissident, and writer; founder and chair of the Democratic Union party (1988-2014); member of the editorial board of The New Times. She became active in the Soviet dissident as a student, and arrested by Soviet authorities in 1969, for distributing leaflets criticizing the Soviet invasion of Czechoslovakia, and confined in a Soviet psychiatric hospital, where she was diagnosed, like many dissidents, with ‘sluggish schizophrenia.’ She underwent two years of ‘treatment,’ and described her experiences in Beyond Despair. In 1972, she helped to copy and distribute an underground publication. She continued her political activities while working. She was tried in 1978, 1985 and 1986 for her dissident activities, and spent more time in mental hospitals. Novodvorskaya continued to organize unauthorized meetings, helped found the Democratic Union Party, and wrote for the underground newspapers like Svobodnoye Slovo (Free Word).  In 2014, she died from   toxic shock syndrome, caused by an acute infection in her left foot

1954 – The United States Supreme Court hands down a unanimous landmark decision in Brown v. Board of Education of Topeka, Kansas, declaring that racially segregated public schools were inherently unequal 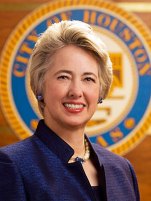 1961 – Enya born as Eithne Pádraigín Ní Bhraonáin, Irish singer-songwriter, former member of Clannad before pursuing her solo career; Ireland’s top selling solo artist; winner of 7 World Music Awards, 4 Grammy Awards for Best New Age Album, and an Ivor Novello Award; nominated for an Oscar and a Golden Globe for Best Song for “May It Be” which she wrote and performed for The Lord of the Rings: The Fellowship of the Ring (2001) 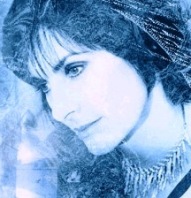 1962 – Jane Moore born, English journalist, author and presenter for Channel 4 online videos. Best known as a columnist for The Sun newspaper, and is also as a contributor to The Sunday Times. Noted for her novels Fourplay and The Second Wives Club

1962 – Rosalind Picard born, American computer scientist and engineer, pioneer of affective computing, which recognizes the importance of emotion in human communication; her work expanded into the fields of autism and developing devices to help humans recognize emotional nuances; Professor of Media Arts and Sciences at MIT; co-founded Affectiva; Fellow of the Institute of Electrical and Electronics Engineers since 2005

1969 – Soviet Venera 6 begins its descent into the atmosphere of Venus, sending back atmospheric data before being crushed by pressure

1973 –The Watergate Hearings begin in the U.S. Senate, televised nationally

1978 – The Children’s Tumor Foundation is formed, the first grassroots organization solely dedicated to finding treatments for Neurofibromatosis (NF), a multi-symptom disease which can be inherited from a parent, but half of those diagnosed with NF have no history of the disease in their family. NF can cause non-cancerous tumors to grow on nerves anywhere in the body, but may also affect cognitive skills, hearing and bone structure.  The CTF helps to coordinate and publicize World Neurofibromatosis Day * events and fundraising worldwide 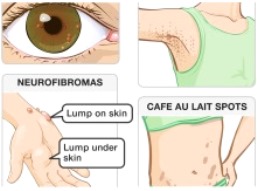 1997 – Zaire is officially renamed the Democratic Republic of the Congo

Flag of the Democratic Republic of the Congo

2004 – The first legal same-sex marriages in the U.S. are performed in the state of Massachusetts, now celebrated as Same Sex Marriage Day *

2004 – The first International Day Against Homophobia (Transphobia and Biphobia * are added later) is launched to coordinate international events which spotlight LGBT rights violations. On this day in 1990, the World Health Organization (WHO) removed homosexuality from its list of psychiatric diseases 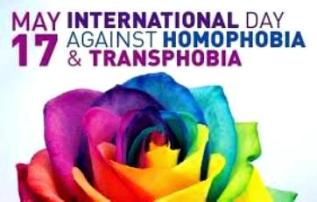 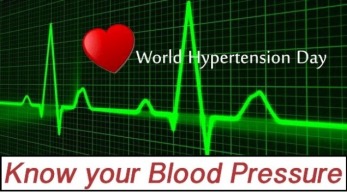 2007 – For the first time since 1953, trains from North and South Korea cross the 38th Parallel in a test-run agreed upon by both governments

2012 – A report on American Roman Catholic nuns from the Vatican’s orthodoxy watchdog, the Congress for the Doctrine of the Faith, which was publicly released by the United States Conference of Bishops, causes controversy. The Leadership Conference of Women Religious, made up of representatives from 80% of Roman Catholic orders in the U.S., who have been vocal about social justice issues, were praised for their work with the needy. But they were taken to task for being unacceptably silent on issues like opposition to same-sex marriage, contraceptives and abortion. The Vatican ordered the nuns to focus more on promoting church orthodoxy 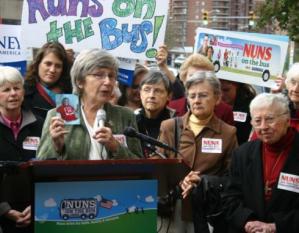 Nuns on the Bus, an advocacy group for the poor, announcing
their tour to protest proposed federal budget cuts

2015 – Iraqi Civil War, Fall of Ramadi: after days of fighting, the Iraqi Army and Special Forces fled the city of Ramadi, provincial capital of Al Anbar Governorate, Iraq’s largest province by area, after ISIL bombed their military headquarters and police stations. ISIL claimed its troops have complete control of the city, but the Iraqi defense ministry said Iraqi warplanes are launching air strikes against their positions

Nona Blyth Cloud has lived and worked in the Los Angeles area for the past 50 years, spending much of that time commuting on the 405 Freeway. After Hollywood failed to appreciate her genius for acting and directing, she began a second career managing non-profits, from which she has retired. Nona has now resumed writing whatever comes into her head, instead of reports and pleas for funding. She lives in a small house overrun by books with her wonderful husband.
View all posts by wordcloud9 →
This entry was posted in History, Holidays, On This Day and tagged Carmen de Icaza, Henri Barbusse, Jacint Verdaguer, Jien of the Tendai, Rosalía de Castro, Valeriya Novodvorskaya, Virginie Loveling. Bookmark the permalink.
Loading Comments...
%d bloggers like this: